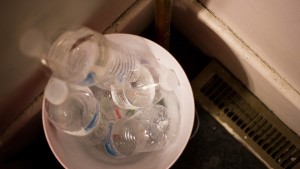 Another Michigan city has been hit with a water crisis.

First, there was Flint in 2014. Officials switched the city's water source to save money and failed to treat it properly – resulting in corroded pipes that leaked lead into people’s water. (Note: Even low levels of lead exposure can damage the nervous system and affect learning and development.) 12 people died from Legionnaires' disease. The crisis was just one example of systemic racism in the state. Now, Benton Harbor – a majority-Black city – is in the news for a similar crisis.

Benton Harbor reportedly sources its water from Lake Michigan. Since 2018, its residents have been dealing with high levels of lead in their drinking water. Higher than Flint's. Residents say officials turned a blind eye until activists' calls became too loud to ignore. Just this month, they told residents to switch to bottled water for things like drinking, cooking, and brushing their teeth. And said they'd make free bottled water more widely available.

Why does this keep happening?

In part because of lead pipes. Benton Harbor has nearly 6,000 service lines. More than half of them are reportedly believed or known to have links to lead contamination. And only 2% are confirmed to be lead-free. Michigan's 2022 state budget set $10 million to replace lead pipes. But it’ll take years. About 100 lines are set to be replaced by next spring...compared to about 20,000 service lines that Newark, New Jersey’s been able to replace since 2019.

The state said it’s working with other agencies to provide water filters to every Benton Harbor resident. And that protecting residents is a “top priority.” But residents are tired of fighting to fix a problem they've had to deal with for years. And reportedly called it environmental injustice, spurred by racism. Now, activists are calling on Gov. Gretchen Whitmer (D) to declare a state of emergency to speed up her proposal to replace the city’s pipes in five years.

Thousands are being affected by Michigan’s latest crisis. But while the state promises change, residents are forced to fend for themselves to get access to the most basic of resources: water.

What’s being turned upside down…

The US workforce. Yesterday, the Labor Dept said a record 4.3 million Americans quit their jobs in August. That’s nearly 3% of the labor force. At the beginning of the pandemic, over 22 million people lost their jobs as businesses closed up shop. But in recent months, companies putting up ‘hiring’ signs have been met with crickets – sparking concerns of a labor shortage. Now, millions of people are saying ‘deuces’ to their bosses – triggering “The Great Resignation.” And searching for greener pastures (think: higher-paying jobs and remote work). The hospitality and retail industries have been hit especially hard. And this could all have ripple effects – from how long you’re waiting for your coffee to getting an extra workload.

Psst…if you’re thinking of quitting your job, make sure your wallet is ready first.

Homeland Security. Yesterday, it said Immigration and Customs Enforcement (ICE) will stop mass worksite arrests of undocumented immigrants. Under the Trump admin, ICE raids at places like factories and food processing plants became common practice. And led to hundreds of arrests. Now, DHS is shifting its focus to crackdown on employers who “exploit” their employees. That includes those who pay “substandard wages,” provide unsafe working conditions, and are involved in human trafficking. Immigration advocates applauded the changes. But called on the admin to provide permanent protections for millions of undocumented migrants – including the Dreamers.

What’s getting a raise…

The US debt ceiling. Yesterday, the House approved a bill to increase the amount of cash the country can borrow to pay its bills. But the $480 billion raise is only until December...meaning, the clock’s ticking on a long-term solution.

This news. Yesterday, a US panel of experts proposed changes for use of daily low-dose aspirin. They're recommending that people 60+ shouldn’t begin taking baby aspirin daily to prevent a first heart attack or stroke. That’s because the risks (read: internal bleeding) outweigh the benefits. Now, experts are saying that high-risk adults in their 40s and 50s should check with their doc first before taking the drug.

...Oh and speaking of health experts, the FDA just authorized the first e-cig ever. Weird vape but ok.

Who’s not jumping through any hoops…