Daily Skimm: Kidnappings in Haiti, Attack in the UK, and Kourtney Kardashian 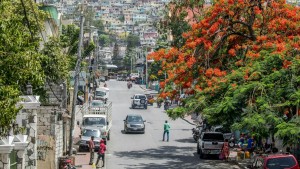 A group of American missionaries were kidnapped in Haiti.

Over the weekend, a street gang kidnapped 17 people – including five children. They're associated with Christian Aid Ministries, an Ohio-based org. And were traveling from an orphanage when they were abducted. Authorities say the 400 Mawozo gang – reportedly one of the most dangerous in the country – is behind the attack. The gang's allegedly responsible for nearly 80% of mass kidnappings in the country. And the tactic has become very common in Haiti.

Haiti has struggled with kidnappings for months. But ever since President Jovenel Moïse's assassination in July, the country's seen a rise in violence. Many have tried to flee. But gangs have taken control over parts of the country and half of the capital. And by one count, kidnappings rose nearly 300%. There are reports of gangs kidnapping children, police officers, and pastors so they can make a buck off of ransoms. Or to use the fear and terror to gain control of territory.

Finding them. There's no ransom out yet. But Haitian officials are reportedly investigating – and keeping the State Dept updated. The dept says Americans' safety is "one of the highest priorities." Meanwhile, Christian Aid Ministries is calling for "urgent prayer." The UN could also be keeping a close eye on the kidnapping – seeing as it happened just one day after its security council voted to extend its mission there.

An attack on Americans is putting the spotlight on a country that's long been in crisis mode. But whether that attention translates into more compassion for those seeking to escape remains to be seen.

The UK. On Friday, a Conservative member of Parliament, Sir David Amess, was stabbed to death while meeting with constituents. Authorities are calling a terrorist act. And have arrested a 25-year-old suspect. They haven't determined a motive. But they say an early investigation reveals links to Islamist extremism. Politicians across the aisle condemned the attack. British Prime Minister Boris Johnson said the UK "lost a fine public servant."

An FDA advisory panel. On Friday, they unanimously recommended a booster shot for every J&J'er age 18 and up. More than 15 million Americans have gotten the one-shot vaccine to protect against COVID-19. But studies show it's less effective than Moderna and Pfizer. Cue some committee members saying that at this point, J&J should be a two-dose vaccine rather than one. Those who got J&J must wait at least two months after their first dose to get dose no. 2. Now, the FDA could make a final decision in the coming days. The news comes a day after an FDA panel recommended a Moderna booster for people age 65+ and those at high risk.

Hollywood. Over the weekend, the union representing 60,000 employees came to a tentative three-year agreement with film and television studios. Employees from make-up artists to sound techs to camera operators were set to go on strike today for better wages and benefits. But they seem to have avoided a production shutdown in an industry already reeling from COVID-19. Under the deal, the union said employees would get 3% pay increases, more time off, and better funding for health plans. The union president called it “a Hollywood ending.” Next up: union members vote on whether to approve the deal.

Who made a slam dunk…

While we're all listening to Adele...

Who’s sending us a Bat-Signal…