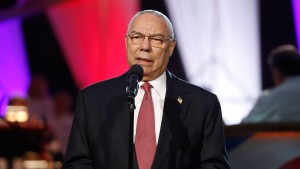 America is remembering a warrior.

Yesterday, former Secretary of State Colin Powell died of complications from COVID-19. He was 84. The son of Jamaican immigrants, Powell pushed through racism and segregation to become the first Black American to hold several top gov positions. Including national security adviser, chairman of the Joint Chiefs of Staff, and sec of state. The four-star general worked alongside four different presidents (from Reagan to Bush). And had a strong hand in shaping foreign policy. But his success wasn't without controversy.

Powell played a key role in spearheading American military operations, including the 1989 invasion of Panama and the 1991 Persian Gulf War. But he's most known for his 2003 speech at the UN – where he used faulty intel to justify going to war in Iraq. Powell later regretted it. Still, leaders from former President George W Bush to Defense Sec Lloyd Austin praised him as a “warrior" and a "great public servant." President Biden’s ordered flags to fly at half-staff. But Powell’s death is also igniting a larger discussion about COVID-19.

Powell was fully vaccinated against COVID-19. But he had been battling multiple myeloma – a form of blood cancer. He was also fighting early stage Parkinson's disease. Given his age and condition, Powell was considered high risk and immunocompromised. But data has shown that COVID-19 vaccines aren't as effective against people who are immunocompromised. And the CDC and the FDA have both recommended and approved booster shots for high-risk groups (Powell was too ill to get his). Now, doctors say Powell’s death is bringing the booster conversation to the forefront – just as the FDA's expected to allow people to mix and match their vax and booster brands.

As many remember Colin Powell’s four decades of service to America, his death is a stark reminder of this unrelenting pandemic. And of the importance of using the tools we have to stay safe.

Who’s got regulations on the mind...

The EPA. Yesterday, it announced plans to regulate PFAS. Also known as "forever chemicals," they got the nickname by not breaking down over time. And they're found in cosmetics, food packaging, and cleaning supplies. But most importantly, they've found their way into water sources. Not great, considering exposure to PFAS has been linked to long-term health effects (think: cancer, liver damage, and more). Now, the EPA wants to restrict the chemicals from being released into the environment. Some say the move is overdue. It comes as efforts to regulate the chemicals have stalled in Congress.

Who needs to answer some questions...

A Louisiana sheriff’s office. Last month, a deputy from the Jefferson Parish Sheriff's Office stopped Shantel Arnold (a Black woman) as she was walking home. Video of their encounter shows him slamming her into the ground, reportedly kneeling and pulling her hair out. The reason for it is still unclear. Arnold was taken to a hospital with several injuries, including a bloody lip and bruises. After the video went viral, the sheriff's office opened an investigation into the confrontation. But the ACLU has filed several lawsuits against the same sheriff's office – for consistently mistreating and violently beating Black residents.

Facebook. Yesterday, the social media giant said it wants to hire 10,000 workers in the European Union to build a "metaverse." Think: a place that’s half VR, half real-time avatars. And 100% an introvert’s worst nightmare. But FB’s ready to get the ball rolling. And while the metaverse already has people thinking about privacy, FB might have a bigger problem finding workers with the global labor shortage. Another challenge: competition. Microsoft and Epic Games are working on their own versions of the metaverse. Looks like maybe not everyone wants to crown Mark Zuckerberg king of his own universe.

Who's a Hollywood All Star...