Daily Skimm: A Scientific Breakthrough, FDA on Boosters, and In-N-Out 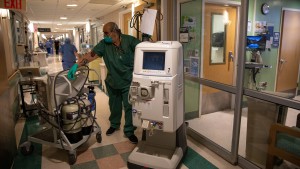 A major breakthrough has scientists squealing.

Give me the news.

First, some background: In the US, nearly 107,000 people are waiting for an organ transplant. Over 90,000 of them are in need of a kidney. But getting off the waitlist can take an average of at least three years. And 12 people die each day waiting for a new one. For decades, scientists searched for alternatives to help save human lives. They tried (and failed) to use animal organs – from chimp kidneys to a baboon heart. But have made progress with pigs, whose organs are similar to humans'. Now, scientists reached a new milestone: successfully attaching a pig kidney to a human for the first time ever.

Doctors at NYU used a genetically engineered pig for the experiment – getting rid of a sugar molecule that human bodies reject. After the green light from the patient's family and medical ethicists, they attached the kidney to a brain-dead patient’s blood vessels, observing it for 54 hours. Almost immediately, docs said ‘it’s working’ – finding that the pig kidney started producing urine and waste. And the biggest success of all: the body didn’t reject the organ. Doctors are calling it a game-changer.

The scientists behind the study say the experiment could mean similar trials for patients with end-stage kidney failure in the next year or two. And they could expand to include hearts, lungs, and livers – all organs that can also have long wait times. PETA said animals aren’t “warehouses for human spare parts.” And that “human organs are still the best hope” for successful transplants. But the long-term effects – like whether pig viruses can infect patients – are still unknown. Still, researchers are calling the engineered pigs a potential “renewable source of organs” that could save lives.

Tens of thousands of people’s lives hang in the balance every day as they wait for an organ transplant. Now, scientists are proving that collaborations in fields like genetic engineering, cloning, and medicine could provide people with a renewed chance of survival.

Who's calling the shots...

The FDA. Yesterday, the agency expanded its guidelines on who can get boosters and which ones. Adults who are at high risk or over the age of 65 can get a booster shot from Moderna (and Pfizer). And all J&J'rs 18 and older can line up for shot number two. As for anyone who wants to mix and match their vaccines, the FDA said ‘go for it.’ No need to be Team Pfizer or Team Moderna. Next up: the CDC’s going to take a look at the FDA's move. And if it agrees, the boosters could be available within days.

The White House. Yesterday, the Biden admin announced its plans to get 28 million kids (aged 5-11) vaxxed. As soon as the FDA approves a shot for them. Pfizer's expecting the thumbs up as early as next month. Meanwhile, the Biden admin's planning ahead. It’s already got about 15 million doses on standby and has rallied thousands of pediatricians and clinics to gear up and give out the shots – once they're approved. But don’t worry parents – kids will be getting smaller doses with smaller needles. Lollipop sizes aren’t expected to change.

Who probably wishes they could hit the fast forward button…

Netflix. Yesterday, hundreds of people gathered outside the company’s office to protest its handling of Dave Chappelle’s latest comedy special, “The Closer.” The comedian made several jokes at the expense of transgender people. At first, the CEOs defended their decision to keep Chappelle in the queue – but later said they “screwed up” internal communication. Employees staged a virtual walkout to show their support to the trans community. Now, Netflix is trying to rewind, saying they “understand the deep hurt” that’s been caused. But TBD if Chappelle's show gets the exit.

Miss France. A feminist group and three applicants are suing the beauty pageant over its alleged discriminatory entry requirements. Think: contestants apparently have to be 5'5'', single, and childless. Just because the pageant started in 1920 doesn’t mean it’s still 1920.