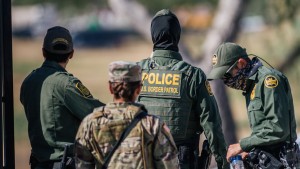 US border agents have some explaining to do.

Federal agents at the US-Mexico border have long been accused of mistreating asylum seekers and migrants. Several reports have even called them out for misconduct. Including misspending federal aid intended for migrants, invasive body searches of women, and ignoring COVID-19 distancing and other protocols. Most recently, images of Border Patrol agents prompted accusations that they whipped Haitian migrants with horse reins. Now, a new report from Human Rights Watch details dozens of instances of alleged abuse and misconduct at the hands of federal officers.

The 26-page report documents more than 160 incidents where migrants experienced physical, emotional, and sexual abuse dating as far back as 2016. One woman claimed a Border Patrol officer repeatedly slammed her to the ground. One man said he was denied medical treatment for a month after a Border Patrol dog bit him. Others said they were forced to sign docs they didn't understand, or officers tore up their official documents. Most felt the agents treated them like they were "worthless." And the report said these claims show DHS has “normalized shocking abuses” at the US border.

Immigrant advocates are appalled at the conditions at the border and called on DHS and the Justice Dept to investigate the allegations. Especially since the Biden admin had promised to deliver a new approach to immigration. But instead continued to use some Trump-era immigration tactics and COVID-19 as an excuse for deportations. All amid a record influx of migrants at the border. But still no word from VP Harris, who's taken a lead role on immigration there.

Poverty, violence, and natural disasters are just a few of the things that push migrants to make the harrowing journey to the US-Mexico border. But it seems some have had to endure abuse by the very people they hoped would help them begin a new life.

A document leak. Yesterday, reports found that some of the world’s biggest coal, oil, and beef producers are trying to make major edits to a UN climate change report. Concerning, since the report tells countries what’s needed to combat climate change. And comes days before COP26 – a climate summit where world leaders figure out how to cut greenhouse gas emissions. The culprits? Countries like Saudi Arabia, Japan, and Australia apparently want the UN to stop being so harsh on fossil fuels. And Brazil and Argentina aren’t big fans of going vegetarian. Others like Switzerland reportedly don't want to foot the bill to help developing countries reach their emission goals. The UN's saying 'nice try, but no.'

PS: Here's the Skimm on how climate change might affect your health.

Gabby Petito's. Yesterday, the FBI confirmed that remains found in a Florida wilderness park are those of Petito's fiancé, Brian Laundrie. The two were on a cross-country road trip when Petito disappeared. Her body was found days later, and a coroner ruled her death a homicide by strangulation. Laundrie – who'd refused to cooperate with investigators – was a person of interest in her death. And he too went missing. Now, authorities are still working to piece together what happened.

Texas. Yesterday, the ACLU sued a TX school district for allegedly discriminating against boys with long hair. The school says their hair should be “no longer” than the bottom of their shirt collar. And has suspended or withheld recess from those who've broken the rules. Now, seven students – including one student who identifies as nonbinary – argue that the gender-based policy violates equal protection under the 14th Amendment and Title IX. But the district insists they’re just setting “grooming standards."

Where things aren’t a game…

South Korea. This week, thousands of people took to the streets – proving the economic hardship in “Squid Game” isn’t just TV, but reality. Amid the pandemic, everyday workers have struggled to survive. Meanwhile, rich and powerful South Koreans apparently got away with embezzlement and corruption. Now, thousands of South Koreans – wearing costumes in a nod to the Netflix show – are saying ‘enough.’ And reportedly calling for job security, greater worker protections, and the right to form unions. No word on whether the gov’s gonna be a player.

Alec Baldwin. Yesterday, the actor fired a prop gun in an accident that killed a 42-year-old director of photography and injured the director. Baldwin was on the New Mexico set of his latest movie “Rust” when he fired the shot. For now, the film production’s been put on hold as authorities investigate what happened.

When you hear memes can help you cope with stress...