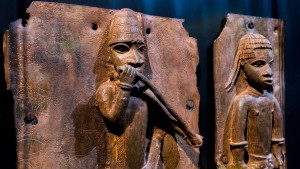 Night at the Museum

A long list of countries from the Soviet Union to Nazi Germany to the British Empire have used their power to take treasures and artifacts that don’t belong to them. Goods have been stolen from Ethiopia, Afghanistan, India, Poland and many others during colonial times or wars. About 90% of Africa’s cultural property (think: statues, paintings, and tablets) is in museums outside of the continent. Some items go through the black market before ending up on display. But in recent years, there’s been a stronger push to get artifacts back to their rightful owners.

Earlier this year, Germany announced it’s returning a number of Benin bronzes (read: priceless artifacts) to Nigeria. Now, France – which has at least 90,000 artifacts from sub-Saharan Africa – is following suit. But only with a petite fraction (read: 26) of looted colonial-era treasures from Benin. Think: thrones, sacred altars, and royal statues. Meanwhile, in its biggest repatriation effort, Iraq’s had some success in reclaiming 17,000 smuggled pieces from the US. Quite a bit of that was held by the family that owns Hobby Lobby. But the journey home isn’t always easy.

This week, Cambodia’s culture minister said there’s evidence that 45 artifacts at the Met Museum belong to the country. And has apparently called on the museum to explain how it was able to get ahold of dozens of Khmer Empire antiquities. The Met says it’s working on it. And there’s been growing calls for Western countries – like the UK – to return stolen goods. One official in Nigeria said it’s important for the artifacts to come home so people can “see who we were.” But many Western museums insist the artifacts were acquired legally.

Culture can be found in a country’s food, music, traditions, and ancient artifacts. These treasures represent pivotal and historic moments that link people to their ancestors. And many want that connection – and what's rightfully theirs – returned.

Needle spiking. UK police are investigating an alarming trend of women – and in some cases men – unknowingly getting spiked through injection. We all know too well the fears of drinks getting spiked at bars and nightclubs. But the latest concern is being targeted through injection. In the central county of Nottinghamshire, police are investigating 15 alleged cases of needle spiking. Police in Scotland are investigating a similar trend. Victims describe feeling fine one moment, then suddenly losing the ability to stand. While experts say getting your drink spiked is more prevalent than these needle spikings, women want action. 160,000 have signed a petition calling on clubs to search people as they enter. And tonight, many across the country are apparently boycotting nightclubs, in protests they’re calling “Girls Night In.”

What all your parent friends want for the holidays...

Vaccines. Yesterday, an advisory panel to the FDA gave a thumbs up to Pfizer’s COVID-19 vaccine for kids ages 5-11. A major concern has been whether the relatively small risk of myocarditis (heart inflammation) outweighs the benefits. After trials involving just a few thousand kids, the advisory group is saying ‘worth it’ – and that a lower dose of the vaccine (a third of the dose needed for adults) gets the job done just fine. Next up, the FDA and CDC give this a full review. And the vaccine could be ready for kiddos on an emergency use authorization as soon as next week. Get those “PAW Patrol” band-aids ready.

Where the attendance sheets are looking kinda thin…

Colleges. Yesterday, new data showed that US college and university enrollment is dropping at a historic rate. The number of undergrads has been declining since 2012. But with the pandemic, schools saw declines of more than 3% both this year and last. That means almost 500,000 fewer undergrad students enrolled in school this fall compared to last year. Now, experts worry the drop in enrollment could have huge impacts on the US economy, with fewer people looking for higher-paying jobs.

...Oh and speaking of pandemic-era trends that aren't going away: wanting to get out of the country. A record number of Americans are planning to cash in their PTO-time to leave the country. Finally time for a “Love Island”-style getaway.

Psst...if that's you, see if travel insurance will cover your plans.