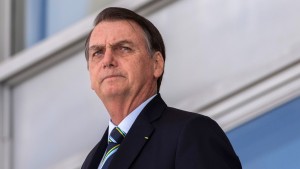 Some of Brazil's legislators want justice.

COVID-19. The country has been hit especially hard, with over 600,000 people killed (potentially an undercount). And far-right President Jair Bolsonaro has been dismissive to say the least. He previously referred to the virus as a "little flu." And has consistently rejected measures like masks and social distancing. He claimed COVID-19 vaccines are linked to AIDS (they aren’t). So a Brazilian Senate committee spent six months investigating the gov’s pandemic response. Now, they are recommending Bolsonaro face multiple criminal charges, including crimes against humanity.

Legislators have receipts. The nearly 1,200-page report found that Bolsonaro let the virus wreak havoc in a failed attempt to reach herd immunity. And that his gov didn’t do enough to get COVID-19 vaccines into the country. On top of that, he even promoted unproven drug treatments (think: horse dewormer and an antimalarial drug). The report said that the gov was “deliberately exposing” the population to a virus that infected millions. It’s not just Bolsonaro who’s feeling the heat – dozens of other people (including three of his sons) could also be charged. Bolsonaro has rejected the findings, calling the panel’s work a “joke.”

The report went to Brazil’s prosecutor-general – who has 30 days to decide whether to pursue criminal charges. But don’t hold your breath. He was appointed by Bolsonaro himself. And a majority of the lower house – which has the power to vote on impeachment proceedings – is Team Bolsonaro, too, so charges are unlikely. In the meantime, the panel asked Brazil's Supreme Court to ban Bolsonaro from social media (sound familiar?). And is planning to send a copy of the report to the International Criminal Court in The Hague. That could mean trouble for Bolsonaro when he leaves office.

Brazil’s COVID-19 death toll is the highest in Latin America. And the second highest in the world (behind the US). Now, some lawmakers are looking at Bolsonaro as they pursue accountability.

Paid family leave. Yesterday, Democrats' efforts to get national paid family leave in the next spending package pretty much failed. The US is one of a handful of countries – and the only rich country – to not offer national paid leave. Not even one day. While some countries get more than a year. Dems originally wanted 12 weeks...and brought it down to four as a way to appease Sen. Joe Manchin (D-WV) – a centrist and a key vote in the 50-50 Senate. But he isn’t budging and reportedly says expanding social programs “doesn't make sense.” Great.

Psst...What not to expect when you're expecting? Guaranteed paid parental leave. Here's how to financially prepare for that.

The CDC. This month, it added mood disorders to its list of conditions at risk for severe COVID-19. It’s no surprise that mental and physical health are linked. But the intersection with COVID-19 has reportedly been raising concerns for months. The virus has been tied to an alarming increase in depression and anxiety. Now, studies show a link in the opposite direction, too: that those with mood disorders like depression and schizophrenia are at an increased risk of severe COVID-19. In one study, people with schizophrenia were more likely to die from COVID-19, after the elderly. The news is especially concerning in the US, where over 19 million people had a depressive episode in 2019...and that was before the pandemic.

PS: There’s ways to protect your mental health during COVID-19. We’ve got tips.

Sudan. The country’s prime minister has been released after being detained this week. Since 2019, PM Abdallah Hamdok has ruled in a power-sharing agreement between military and civilian leaders. The deal: a council of civilian and military leaders work together until elections can happen in 2022. But all that dissolved this week. On Monday, military leaders arrested Hamdok, declared a state of emergency, and took control of the country. The news launched a wave of protests and crackdowns, with seven reportedly killed and 140 injured after clashes with the army. After facing local and international pressure, military leaders agreed to release Hamdok. Now, military leaders say they plan to hold elections in July 2023.

US passports. Yesterday, the State Dept issued its first passport with an “X” gender marker. The US is by no means the first country to give options beyond “M” or “F.” Australia, Canada, Nepal, and Pakistan beat Americans to it, to name a few. After an intersex activist initiated a legal battle in 2015, the US is finally catching up. Now, an estimated 5 million nonbinary and intersex Americans will have another option. The US envoy for LGBTQ+ rights says the change allows people to “live with greater dignity and respect.” The activist had another message: “never give up.”