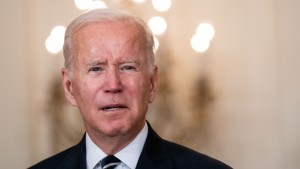 President Biden announced a slimmed down version of his spending plan.

Money for universal preschool, subsidized child care, and extended child tax credit. It also includes roughly $555 billion to fight climate change. Biden wants to expand Medicare coverage to include hearing services and $150 billion for affordable housing. There’s also $100 billion set aside to reduce immigration backlogs. He plans to pay for it with a 15% minimum tax on corporations that make over $1 billion in profits. And a new tax surcharge for America’s wealthiest. But in order to get some things through, Biden had to make cuts.

Free community college, lower prescription drug costs, and paid family leave were all crossed off the list. Because apparently, the US doesn't mind being one of six countries in the world (and the only rich country) to tell new parents 'you're on your own.' Less than 25% of US workers have access to paid family leave. That leaves the rest of the population to decide between their paycheck or their ability to bond with their child. So that's what Congress is up to. Next up: the blueprint heads back to the House. If it passes, the 50-50 Senate takes it up. And we could start this "Groundhog Day" nightmare all over again.

President Biden came in hot thinking he could take a pen to health, the environment, and pretty much every social program under the sun with Dems holding both chambers of Congress. The reality check is hitting him hard. But it's parents and caregivers who once again stand to suffer from gridlock.

Psst…since the gov isn’t helping, here’s how to financially prep for parental leave.

Italy. Earlier this week, the Senate there blocked debate on a bill that would’ve made violence against the LGBTQ+ community and women a hate crime. Italy approved of civil unions in 2016. But still lags well behind other EU countries when it comes to protecting LGBTQ+ citizens. And advocacy groups have recorded hundreds of hate crime and discrimination cases every year which often go unpunished. But conservatives and the Vatican argued the bill would restrict freedom of expression. And that it promoted “homosexual propaganda in schools.” Now, lawmakers are saying the bill is essentially dead.

When you've never meta someone who’s tried so hard to stay relevant...

Enter: Facebook. Yesterday, CEO Mark Zuckerberg announced its new company name: Meta. The name provides a new umbrella term for the companies the Artist Formerly Known as Facebook owns: Instagram, WhatsApp, Messenger, and yes, Facebook. And Zuckerberg chose “Meta” to reflect the company’s focus on the “metaverse” – a place that’s half VR, half real-time avatars. And 100% material for a “Black Mirror” episode if we’ve ever heard one. Zuckerberg’s calling it the “next frontier.” But Twitter users were quick to respond with the jokes.

Andrew Cuomo. Yesterday, the former New York governor was charged with a misdemeanor criminal complaint. In August, an investigation found he sexually harassed at least 11 current and former state employees. Cuomo eventually resigned after growing pressure. But has continued to deny the claims. Now, the complaint says Cuomo forcibly placed his hand under a victim’s blouse last year. He will appear in court next month. And could face up to a year in prison.

We can't lose this plant.