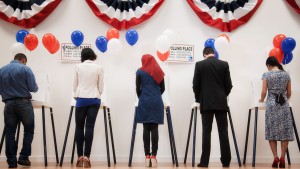 Sure is. In Virginia, New Jersey, and cities across the US, Americans are turning out to vote on everything from mayors to ballot measures to governor’s races. Here’s what you need to know about:

Virginia: What politicos are calling a crystal ball for 2022. Terry McAuliffe (D) and Glenn Youngkin (R) are neck and neck in a race that many see as a major test of post-Trump America. McAuliffe was governor from 2014 to 2018. But since VA governors can’t serve consecutive terms, he’s had to step away for a bit. Youngkin is a businessman who’s treading a fine line: get Trump's base on his side while distancing himself from the former president. Now, the two are going head to head on vaccine mandates and abortion rights.

New Jersey: Gov. Phil Murphy (D) is hoping to keep his job safe from former Assemblyman Jack Ciattarelli (R). Murphy’s sell: his history of raising the minimum wage, taxing the rich, and expanding paid family leave. Meanwhile, Ciattarelli’s been focused on one of the biggest issues for NJ voters: high property taxes. And wants vaccines to be optional. If Murphy wins, he’ll be the Garden State’s first Democratic governor to get reelected in 44 years. But Ciattarelli’s hoping to pull off an upset.

Any other big races to watch?

Yup. At least seven major cities are holding mayoral elections. And 24 ballot measures are reportedly up for a vote across six states. One big theme that’s come up across the ballots: policing. Minneapolis will vote on whether to significantly rework its police department – replacing it with the Department of Public Safety (and mental health professionals) and sharing oversight between the city council and the mayor. It’s a major test of the “defund the police” movement, which gained traction in the city following the murder of George Floyd. Meanwhile, on the East Coast, retired NYPD captain Eric Adams (D) is favored to win the NYC mayoral race to become the second Black American to lead the most populous city in the country.

Today is kind of an in-betweener election. We're about one year out from the presidential election last year. And midterms are coming in hot in 2022. But make no mistake: on the ballots today are deeply impactful issues like policing, voting rights, COVID-19 restrictions, and which party has momentum to take control of Congress next year. Vote up.

What’s keeping everyone on edge…

The Supreme Court. Yesterday, most justices looked ready to let abortion providers challenge Texas’s strict abortion law. In September, TX banned most abortions after six weeks of pregnancy. And gave private citizens the power to sue and enforce the law. The Justice Dept and abortion providers sued the state. And the high court entered the chat. Now, during oral arguments, Justices Brett Kavanaugh and Amy Coney Barrett seemed to be countering Texas’s arguments. Kavanaugh said the law has a “loophole that’s been exploited.” And Barrett questioned the way the law tries to avoid the courts.

PS: We Skimm’d the how the battle for abortion rights began and how some states are cracking down.

India. Yesterday, Prime Minister Narendra Modi pledged that the country would reach net-zero carbon emissions by 2070. India is the third-largest emitter of CO2 (after China and the US). As a developing country, its economy is still growing. And its energy demands are expected to grow with it. Now, after resisting public pressure, the world’s second-most populous country is saying ‘save the date’: it plans to get to net zero by 2070. Pessimists are pointing out that’s 20 years past the 2050 deadline some countries have for net-zero emissions (to avoid the worst impacts from climate change). Realists say a 2050 deadline wasn't going to happen anyway.

A “Squid Game” cryptocurrency. Yesterday, the crypto dropped to $0 after scammers reportedly made off with an estimated $2.1 million after duping investors. The scammers created online games featured in the popular Netflix series. And said ‘if you want to play, you need some SQUID.’ Aka crypto tokens. Investors apparently couldn’t wait to put on their digital tracksuits to get their game on. And sent SQUID’s value soaring to as high as $2,861. But reports indicated the whole thing was a sqam. Experts have told people to be careful with “meme” cryptos, saying don’t fall for the hype or you could lose big. Turns out they were right.

Norway’s women’s handball team. The International Handball Federation (finally) said it’s no longer requiring women to play in bikini bottoms. The change comes after the team was fined about $1,700 for competing in shorts when protesting the sexist dress code.