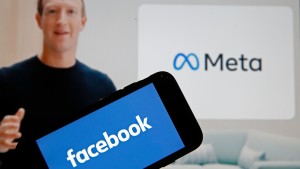 Facebook, err Meta, is cleaning out some of its servers.

What’s on its mind now?

It’s no secret that the company’s PR woes have been flooding news feeds for weeks now. There are the leaked internal documents. The whistleblower’s testimonies. And countless exposés about the company’s impact on Americans and foreign govs. Through it all, Meta has said reports are painting “a false picture.” But now, the company appears to be trying to save face by losing face(s).

Yesterday, the company said it’s closing a chapter in its book by shutting down its facial-recognition software. The decade-old program has allowed users to easily tag all their FB friends. You know, the square box that goes over your friends’ faces in photos. Meta has apparently built one of the world’s largest archives of digital pics in part because of the program. But it’s raised privacy concerns and led to a $650 million settlement in a privacy lawsuit. Now, FB is hitting ‘delete’ to over a billion face scans in the coming weeks. And deleting a system that impacts about a third of daily active users. But not everyone’s hitting the ‘like’ button.

People with visual impairment or who are blind will lose out on getting photo descriptions using the FB service. And privacy advocates reportedly say Meta should do more to keep companies from using FB photos. That’s because software companies like Clearview AI – used by law enforcement – have built their own facial recognition tech in part from FB photos. But Meta says this is the best move to address “growing societal concerns” around privacy. And that there isn’t enough regulation on it yet. Still, facial recognition tech can be used to help people access their accounts. And Meta hasn’t completely ruled out its use in future projects.

Meta isn’t the only tech company to limit facial recognition (see: Amazon and Microsoft). But retailers and governments (the US and foreign ones) haven’t stopped giving it a thumbs up. Meaning, facial recognition won’t be just a Facebook memory.

PS: We Skimm’d everything you need to know about Meta and its recent PR nightmares, including the Facebook Papers.

The US is one of only six countries in the world not to guarantee paid family leave. And last week, efforts to change that failed in Congress. Our co-founders and co-CEOs Carly Zakin and Danielle Weisberg are amplifying the conversation around parenthood in America. In an op-ed published this week, they’re shining a light on how paid family leave, or lack thereof, has an impact. Help spread the word by using #ShowUsYourLeave on social media.

Where there was Big Election Energy…

All over the US. Yesterday, millions of Americans headed to the polls to vote for several local or state positions. But all eyes are on Virginia as Glenn Youngkin (R) won, defeating Terry McAuliffe (D). Youngkin's set to become the first Republican governor of VA since 2009. It's got Dems shaking in their boots, seeing as President Joe Biden won the state by double digits last year. And could spell trouble for them as they try to maintain control of Congress next year. But things also happened in...

...Oh and speaking of big things on the ballot, Minneapolis voters said 'no thanks' to replacing the police department with a Department of Public Safety (which includes mental health professionals). It could be a blow to the "defund the police" movement.

Vaccinations. Yesterday, the CDC formally recommended Pfizer’s low-dose COVID-19 vaccine for children 5 to 11 – making the vaccine available for some 28 million little ones. While kids are at a much lower risk for hospitalization than adults, over 6 million have still tested positive for the virus. And more than 100 have died in the 5-11 age bracket. Now, the CDC’s saying ‘it’s go time.’ And that most parents can start making appointments soon. President Biden’s called the move “a turning point” in the fight against COVID-19.

The DOJ and Social Security Admin. As of this week, same-sex partners who'd been denied Social Security survivors benefits may now qualify. The SSA requires couples to be married for at least nine months in order for a spouse or partner to get survivor benefits. But gay marriage bans didn’t make that timeline possible. In 2018, an LGBTQ+ rights nonprofit sued the Social Security Admin on behalf of two survivors, who weren’t able to receive any benefits after their partners died. Federal district courts ruled in their favor but the former Trump admin appealed. Now, the DOJ and SSA have dismissed the appeals. And are allowing the surviving partners to get their long-fought benefits. One of the survivors involved in the legal battle said their relationship “will finally be respected.”

Who didn't make a Blooper...

The Atlanta Braves. Yesterday they beat the Houston Astros in Game 6 to take home their first World Series championship since 1995.

What to do if you're stuck in a windowless dorm...

Look out for mirages.