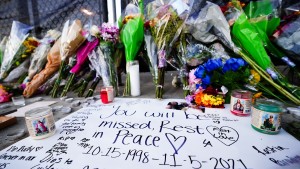 Many are still reeling after the Travis Scott concert that turned deadly.

On Friday, about 50,000 people attended the famous rapper’s sold-out Astroworld music festival in Houston, TX. When Scott showed up on stage, concertgoers said things went “haywire.” Some described being squeezed so tightly that people couldn’t breathe or move. Over 300 people suffered injuries – some from being trampled. At least eight people died – including kids as young as 14 and 16 years old. And more than two dozen were hospitalized. It comes two years after three people suffered injuries at the same festival – when fans climbed over fences and barricades to get inside.

The event is evoking memories of a long list of similar concert tragedies. In this case, concertgoers reportedly say barricades keeping people in their ticketed sections made it especially difficult to escape. It's not clear what exactly started the crowd surge at Astroworld – authorities are still investigating. But the Astroworld tragedy is now one of the deadliest live music events in US history.

Houston's mayor gave his condolences and said he's working on getting to the bottom of how this tragedy happened. Meanwhile, Travis Scott is receiving pushback. Scott, festival organizers, and fellow performer Drake have been sued, including for what one attendee reportedly called a “preventable” tragedy. The concert seems to have continued for about an hour after the tragedy first began. In reaction to the criticism, Scott took to Instagram, saying he’s “devastated” and that he’s praying for the families. His partner Kylie Jenner added that they weren’t aware of any deaths until after the concert. A county judge is calling for an independent investigation.

Many have looked forward to concerts as a return to some sort of normal amid a painful and isolating year and a half. But what should have been a celebration of music has left fans rattled and fearful. Now, families are left mourning – and wondering what safety measures could have prevented this.

Who's bridging some divides...

Congress. On Friday, the House voted 228-206 to pass a $1.2 trillion bipartisan infrastructure bill. In August, the Senate gave the legislation a thumbs up, which included $550 billion in new spending to fix roads and bridges, revamp the electric grid, and more. But negotiations stalled for months as progressive Democrats tied the passage of an infrastructure bill to the passage of a more-than-$1-trillion social safety net package. Now, President Biden’s saying ‘a win’s a win.’ And that he’ll sign the infrastructure measure after lawmakers return from recess next week – regardless of what happens with the spending package.

PS: theSkimm’s co-founders and co-CEOs Carly Zakin and Danielle Weisberg are putting a spotlight on how the lack of paid family leave has an impact on America. Help spread the word by using #ShowUsYourLeave on social media.

Iraq. Yesterday, Iraqi Prime Minister Mustafa Al-Kadhimi survived an assassination attempt after armed drones targetted his home. It's unclear who’s behind the attack. But it comes amid rising tensions over last month's parliamentary elections. Iraq has a power-sharing gov that aims to balance religious and ethnic interests. And Shiite Muslim cleric Muqtada al-Sadr’s party won the most seats. But supporters of Iranian-backed militias, who lost more than half of their seats, have been protesting and calling for a recount. Now, Iraqi security forces are taking “necessary measures” tied to the failed attempt. The international community – including US, UN, and Iran – have condemned the attempted assassination.

Aaron Rodgers. The Green Bay Packers QB is facing a wave of criticism over his approach to COVID-19 and vaccines. NFL players do not have to be vaccinated. But they are subject to extra restrictions (think: more social distancing rules, masks). In August, Rodgers told reporters he was "immunized." But last week, he tested positive and it came out that he was unvaccinated. Rodgers is defending his language, saying he's allergic to an ingredient in the mRNA vaccines. And that he came up with an alternative regimen he wanted the NFL to treat as vaccinated. He also said he turned to a podcast host for treatment of the virus. The news launched a wave of criticism against Rodgers for allegedly lying to reporters, endangering teammates, and spreading COVID-19 misinformation. The NFL is investigating Rodgers, who could face fines if he's found to have violated the league's policies.

While this is “Wicked” awesome…

So is the USNS Harvey Milk.