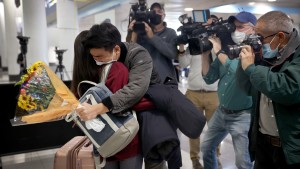 Families across the US are singing ‘reunited, and it feels so good.’

Tell me more about the good news.

Yesterday, the US lifted nearly two years of restrictions on travelers from 33 countries. That includes much of Europe, China, India, Mexico, and Canada. In January 2020, then-President Trump started restricting travel to try to contain the virus’s spread. And earlier this year, President Biden extended the ban. But last month, the White House announced a new itinerary for those looking to travel to the States. And many started packing their bags and vax cards. Now, loved ones who’ve been separated for over a year are hugging, kissing, and embracing one another in reunions across the US.

Sure, but add masks. International travelers will also have to embrace the new travel rules. In order to enter the country, people have to be fully vaccinated (with few exceptions). And show proof of a negative COVID-19 test within three days of traveling. Unvaccinated Americans and children under 18 can also enter. But they’ll have to test negative within one day of their trip. All vaccines approved or authorized by the WHO and FDA are fair game. These rules also reportedly apply to those with visas to work and study in the US.

Airlines and hotels could soon be enjoying a boost in bookings. (We’ve got tips on how to have a smooth trip here.) Especially, since pandemic-era restrictions cost the US nearly $300 billion in losses. US border towns are also hoping travelers hit up local malls, restaurants, and shops on their trips. But the lift in travel restrictions also came days after the World Health Organization declared Europe the epicenter of the pandemic (again). Also amid emerging COVID-19 variants and stalled vax efforts around the world. Plus, there are also reports that the US’s move has led to a surge of migrants – with many hoping it’ll be easier to get entry and start a new life.

The pandemic is far from over. For months, many families have had to live apart because of a deadly virus. Now, they’re savoring the joy in seeing their loved ones just in time for the holidays.

PS: Planning to get away over the holidays? Here are some tips to stay safe while traveling – both within the US and abroad.

Where people are demanding answers…

Nicaragua. The international community is calling out President Daniel Ortega after this week’s election. On Sunday, Nicaraguans hit the polls in what was largely considered a sham election. Think: dozens of opponents arrested and only a handful of little-known candidates allowed to run. EU election observers reportedly weren’t allowed to do their job and journalists were not even allowed in the country. Surprise: when yesterday’s early results came in, and Ortega seemed to have won reelection by a landslide. Now, the longest-serving leader in the Americas is set for a fourth consecutive term. Oh, and his VP? His wife. The US, EU, and others are calling BS and demanding the release of jailed activists, journalists, and opposition leaders. And the US is threatening sanctions. All of this could lead to even more migrants fleeing to neighboring countries.

What’s getting another look…

Blue Wolf. Yesterday, The Washington Post reported that the Israeli military is using facial recognition in cameras and smartphones to monitor Palestinians in the West Bank. It's part of a surveillance program that Israel reportedly rolled out over the past two years. And uses a smartphone app called Blue Wolf. It takes pictures of Palestinians and matches their faces to a database. And alerts authorities to whether someone should be detained or walk free. The database reportedly has thousands of images ranging from children to the elderly. Israeli officials say the program is used to combat terrorism. But some Palestinians (and a former Israeli soldier) say the surveillance is another infringement on their human rights.

A hand signal. Last week, a missing North Carolina teen was rescued after she used a hand signal that she learned on TikTok. The teen got the attention of a passing driver by giving the one-handed signal (hold hand up, palm out, tuck your thumb, and fold your four fingers down) used to indicate distress or violence at home. The driver called 911 and authorities located the teen – who'd been driven through four states by a 61-year-old man. Police arrested and charged him with unlawful imprisonment and sexual crimes involving a minor. Officers reportedly called the gesture a “wonderful” tool that could help others in distress.

PS: Let's talk about the anti-aging movement. Because the pressure to look young has quite the history.