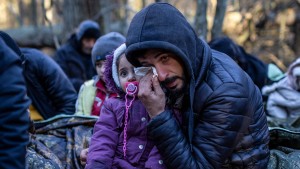 Belarus is being accused of encouraging a migrant crisis.

The Eastern European country is run by Alexander Lukashenko, also known as “Europe’s last dictator.” Last year, his gov violently cracked down on protesters who claimed the presidential election (which he won) was rigged – arresting about 33,000 people and brutally beating thousands. In response, the EU hit the gov with sanctions. Now, at least three of Belarus’s neighbors (which are part of the EU) are seeing a surge of migrants. And the EU is accusing Belarus of causing the crisis.

How could that happen?

After sanctions were announced, Lukashenko threatened to allow the flow of migrants, drugs, and even nuclear materials into the bloc. Since then, thousands of desperate migrants fleeing violence in the Middle East and Africa have apparently been given visas. But instead of letting migrants stay in the country, Lukashenko’s being accused of directing them toward the borders of EU countries like Latvia, Lithuania, and Poland. That brings us to the latest crisis.

An estimated 2,000 migrants are now stranded along the Belarus-Poland border, where they’ve experienced freezing temperatures. At least eight people have died as pregnant women and children continue to look for shelter and food. Migrants have also reportedly said that Belarusian authorities have taken away their phones and pushed them toward the border. But Belarus isn’t the only one that’s said to be at fault here.

Polish troops have been accused of using tear gas, strobe lights, and loudspeakers to keep migrants away. It’s prevented journalists and aid orgs from reaching certain areas – making it difficult to get a clear sense of what’s going on. Meanwhile, Lukashenko's denied he's responsible for the crisis. And he and his bud Russian President Vladimir Putin are pointing fingers at Poland for its military presence. The EU’s calling for more sanctions on Belarus. And Poland is saying it won’t be “intimidated and will defend peace in Europe.”

Thousands of migrants are trying to flee war, violence, and poverty in search of a better life. Now, governments appear to be taking advantage of innocent people and using them as a ploy in their political games.

Where people are pushing for equal rights...

Spain. Last week, the country’s health minister extended free fertility services to the LGBTQ+ community. Fertility treatments (think: IVF or IUI) are cost-free in Spain. But in 2014, the ruling conservative party limited the zero-cost benefits to heterosexual women with a partner. For years, LGBTQ+ rights groups have called on the gov to scrap the limitations. Now, Spain’s Socialist gov has followed through, calling it a “restitution” of rights. The move could benefit thousands.

...Oh and speaking of fertility treatments, a California couple has sued a clinic for allegedly mixing up their embryo with another family’s.

What had a lightbulb moment...

General Electric. Yesterday, the Boston-based industrial giant said it’s splitting up into three companies. In 1892, Thomas Edison (yes, that one) co-founded GE, which has become a household name and is in the S&P 500. The company rolled out lightbulbs, jet engines, kitchen appliances, and more. But GE has been struggling since the 2008 financial crisis. Things got so bad that it was booted from the Dow a decade later. And GE has struggled to keep up with tech giants like Apple, Amazon, and Microsoft. Now, the company says it’ll stand alone as an aviation company. It will also roll out a health care and energy company over the next few years.

Here’s another thing to mess with your sleep routine. Yesterday, researchers said there’s such a thing as a perfect bedtime: between 10 and 11pm. They analyzed data from over 88,000 adults. And apparently found that catching Zs any earlier or later than 10-11pm can increase the risk of heart disease by as much as 25%. Problem, since heart disease is the number one cause of death in the US. So, time to get that shut-eye in. But not too early, not too late. No pressure.

PS...One-third of adults said they’ve suffered from sleep problems. Here are some tips to drift off at night and stay on during the day.

US household debt. Yesterday, the Fed said it passed $15 trillion in the third quarter – a new record. It comes as Americans face higher prices on just about everything.

Psst...The holidays are near, we’ve got tips on how to budget and still spread cheer.

What’s the big talker of the week…

Britney’s conservatorship. And what it means.