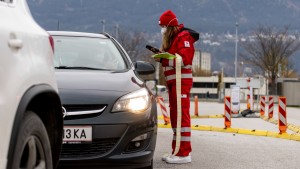 Europe is at the epicenter of COVID-19. Again.

On Friday, the WHO said that Europe had nearly 2 million coronavirus cases in a single week – the highest number since the beginning of the pandemic. And found that virus-related deaths have also gone up 10% there – even as they drop or remain the same almost everywhere else in the world. Germany, the Netherlands, and Austria are breaking their own infection records. The delta variant is driving numbers up – and many are pointing the finger at unvaxxed Europeans for the rise in cases. Some countries are now looking to bring back restrictions. But Austria’s saying ‘we don’t have time to wait.’

Austria has one of the lowest vaccination rates in western Europe (65%). That's still about 5% more than the US. But vaccine hesitancy – apparently fueled by Austria's far-right Freedom Party – is making it difficult to get the rest on board. Now, the gov wants to take matters into its own hands. Starting today, it's enforcing a national lockdown – for the unvaccinated only. Some 2 million unvaccinated Austrians ages 12 and up will be restricted from leaving their homes except for groceries and doctor's visits. Those who don’t follow the rules could be fined. The gov says the move is "necessary" amid the rise in cases. The far-right sees it as treating unvaccinated people as second-class citizens.

Will other countries do the same?

It’s unclear. But health experts say the rise in cases in Europe could be a warning sign. About 60% of the US population is fully vaxxed – a number even lower than some European countries already dealing with thousands of new daily cases. Meanwhile, those like Spain and Portugal who have vaccination rates above 80% haven’t had a major surge. But the combo of low vaccination rates, waning immunity among the vaxxed, and relaxed restrictions has health experts around the world concerned. (Cue the convo on booster shots.)

Europe’s setback is a reminder of the pandemic’s fragile state. And that even if many people are vaxxed, it'll take a larger effort to get the world back to any sort of normal.

What didn’t rise to the occasion...

COP26. On Saturday, nearly 200 countries reached a climate deal after negotiations stretched into overtime. Diplomats and world leaders gathered in Glasgow, Scotland, in a last-ditch attempt to stop climate change. But after two weeks, it looks like they didn’t understand the assignment. In the 11th-hour of negotiations, India and China weakened provisions on fossil fuels. Now, govs have agreed to “phase down” not “phase out” coal – the largest contributor of greenhouse gas emissions. To follow through on their promise to give poorer countries $100 billion to fight climate change. And to circle back at the end of 2022 with bigger promises to cut emissions.

Indigenous kids. Researchers said they discovered the names of 102 Native American students who died at a federal boarding school in Nebraska. From 1884 to 1934, the Genoa Indian Industrial School reportedly served as one of 25 federally-run boarding schools in the US. Their purpose: to assimilate Native American children and erase their cultural identities. Students at these schools faced violence, abuse, disease, and death. Now, researchers say they’ve used newspaper archives to identify dozens of them. But that it’s likely a vast undercount. It comes as state officials are still working to find the school’s cemetery.

Who got what she wants, what she needs...

Britney Spears. On Friday, a Los Angeles judge ended the pop star’s 13-year conservatorship. Since 2008, Britney’s dad, Jamie Spears, has controlled much of her personal life on issues related to her career, health, and finances. Since last year, the pop star has pleaded for her father to be removed from the conservatorship. And in September, a judge suspended her dad as a conservator. Now, the court’s completely shredded the agreement. And said the singer doesn’t need to undergo a mental health evaluation (something that a judge can require). Read: Britney’s free to live her life. The judge’s decision is a big win for the #FreeBritney movement and especially for Britney. But it also shined a light on the judicial process of conservatorships and guardianships in the US, where there's an estimated 1.3 million cases. The singer thanked her fans for their support, adding "#FreedBritney."

Who you may want to check out…