Daily Skimm: Pregnancy During COVID-19, The Groveland Four, and Tiffany 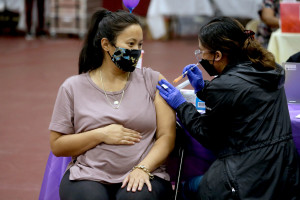 The CDC is urging pregnant people to get boosters.

Give me the update.

Last week, the CDC put out not one, but two studies about the dangers that COVID-19 – particularly the delta variant – poses to pregnant people. The first found that pregnant people infected with delta are at an increased risk of stillbirth. And that 1 in 155 deliveries among uninfected people reportedly resulted in stillbirth between March 2020 and September 2021. But for those who’d gotten the virus, stillbirths accounted for 1 in 80 deliveries. Still rare. But almost double the risk. The second study found the risk of death for pregnant people infected with delta is also higher – but that it's disproportionately worse for pregnant women of color.

It’s not. Delta accounts for 99% of new cases in the US. Also not good: More than 90,000 new cases are being reported each day. And only about 30% of pregnant people in the US are vaccinated. So the CDC’s reminding the rest: it’s time. Last month, health officials said pregnant people qualify for boosters. But some have called out the federal gov for its confusing booster recs when data has indicated for months that vaccine efficacy can fade with time.

Boosters can help. Last week, the CDC expanded booster eligibility to people 18 and up. But boosters can take up to two weeks before the added protection kicks in – for you and those you spend the holidays with. That’s a tight turnaround for Turkey Day, but enough to plan around for Christmas and New Year’s. For more info on the booster shot and where to get it, see here.

COVID-19 isn’t going anywhere anytime soon. And the risks are still very much real for the elderly, pregnant people, and anyone with underlying health conditions. Stay safe.

Where justice is being served…

Florida. Yesterday, a Lake County judge exonerated four young Black men falsely accused of raping a white woman more than 70 years ago. In 1949, Norma Padgett accused the men of raping her in Groveland, FL. Officials arrested Charles Greenlee, Walter Irvin, Samuel Shepherd, and Ernest Thomas – who became known as the Groveland Four. A mob shot Thomas over 400 times after the accusation. And an all-white jury convicted the other three men without any evidence. Shepherd later died at the hands of police. And Irvin and Greenlee passed after being paroled. Their case became known as one of the greatest miscarriages of justice in Jim Crow-era Florida. Now, the state’s officially cleared their names after a review, reportedly saying the Groveland Four fell victim to prosecutorial misconduct and fake evidence.

Waukesha, WI. Yesterday, officials said the man suspected of driving through a Christmas parade faces five counts of homicide. Five people died and 48 others were injured. The motive has yet to be determined but authorities say they’ve ruled out terrorism. And note that the 39-year-old suspect has a history of alleged domestic abuse, including one case earlier this month. Now, he's reportedly scheduled to appear in court today.

Who doesn't want to have to update their LinkedIn...

President Biden. Yesterday, the White House said that 46 plans to run again for office in 2024. At 78, Biden became the oldest US president to take office. And is apparently eyeing a new record when he’s 82. There’s been speculation among Democrats that Biden wouldn’t seek a second term. Now, his admin appears to be quashing the gossip. It comes amid reports that the president’s meeting with allies to reassure them of a second run. And as Biden’s job approval rating gets low, low, low.

Jerome Powell. Yesterday, President Biden renominated Powell to serve a second four-year term as chair of the Federal Reserve. Since 2018, Powell (a Republican) has been at the helm of America’s economy and the Fed’s implementation of pandemic-era relief measures. Now, Biden’s saying Powell’s the best man to lead the country’s economic recovery from the pandemic. Next up: The Senate’s expected to confirm Powell’s nomination.

PS: Get to know the Fed better and see how it affects the economy (and you).

Who hit a bullseye…

Target. Yesterday, the retail giant said it’s forever hanging ‘closed’ signs on Thanksgiving – expanding on a move that began during the pandemic. And letting its employees at its more than 1,900 stores enjoy the holiday. Tar-yay.

What pairs well with breakfast…