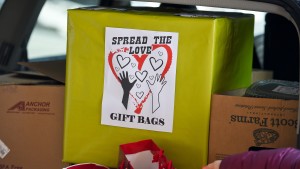 Today’s all about paying it forward.

While many have spent the past few days feasting, safely enjoying time with loved ones, and hitting up holiday sales, not everyone's been so lucky. The pandemic is still a thing. And many are reeling from its impact on their family, health, work, and finances. Enter: Giving Tuesday. A day meant for giving back...whether it's with your time, money, voice, or beyond. We broke down ways you could spread the holiday cheer to...

Women in the workforce…Between February and April 2020, 22 million Americans lost their jobs. In April 2020 alone, women made up 55% of job losses. One analysis found that one in 10 working moms with young kids quit work – half saying it was because of school closures. Nearly two years later, many women still haven’t returned to the workplace. And women of color have experienced an even slower recovery. You can support orgs that provide resources for women to thrive in their careers like Dress for Success and Path Forward.

People facing hunger and food insecurity...Last year, over 38 million people in the US lived in households with food insecurity (limited access to adequate food). And one analysis found that the number of people experiencing hunger still remains far above pre-pandemic levels. Some ways you can give back: Donate to orgs like Feeding America or your local food pantry. Or reach out to volunteer with orgs like Meals on Wheels.

Those in the digital divide…As kids and employees went from IRL to remote life, the pandemic exposed major gaps in access to tech and the internet. The FCC has found that about 14.5 million Americans still don't have access to broadband service – mostly due to things like their location and income. But another report estimates the number is actually closer to at least 42 million. PCs for People and Digitunity are just some of the orgs working to close the digital gap by providing things like computers and internet service.

Health care workers…At the beginning of the pandemic, hospitals struggled to get their hands on PPE, ventilators, and more. Since then health care workers have treated patients through multiple variants and surging cases. But now, there’s a shortage of health care workers. You could donate to the CDC Foundation or CORE Response, which both provide things like med supplies and emergency staff to communities in need. Or to For the Frontlines, an org that provides free crisis counseling to health care workers.

Those experiencing homelessness...More than half a million people are homeless across the US. And the pandemic hit them hard. Think: little access to places to wash their hands and almost no social distancing at shelters. People who are homeless are twice as likely to be hospitalized and three times as likely to die than the general public. Covenant House works to support youth facing homelessness. And Family Promise helps families experiencing homelessness by providing alternative shelter and transportation. And with winter approaching, One Warm Coat is going to need all of the coats they can get.

Mental health...The pandemic wreaked havoc on people's mental health. More than 40% of Americans admitted to feeling depressed – after months of isolation and financial stress. And physicians are calling the mental health crisis among kids a national emergency. With young girls and children of color particularly at risk. Here are some resources to keep in mind: The National Suicide Prevention Lifeline offers free and confidential support for people in distress. The Child Mind Institute provides clinical care and supports community programs. And Pet Partners brings pets and people who are struggling together.

While the pandemic itself may be temporary, its effects will follow us for years to come. One thing we can do is give back and help those who are still suffering after nearly two years of uncertainty.

PS: theSkimm is not affiliated, sponsored or partnered with any of the orgs in this story.

What everyone wants answers on...

Omicron. The highly-mutated COVID-19 variant first ID'd in southern Africa has now been reported in more than a dozen countries. The only known cases in North America so far are in Ontario, Canada. But the Biden admin says it’s only a matter of time before the new variant lands in the US (if it hasn't already). And that while lockdowns and more travel restrictions aren’t on the table, people should still get vaxxed and boosted. Especially since the WHO's warning that Omicron could drive a rise in cases and strain health care systems. It comes as President Biden yesterday told the public that the variant is a “cause for concern, not a cause for panic.”

...Oh and speaking of vaccines, a Missouri federal judge has temporarily blocked a federal vax mandate on some health care workers in 10 states.

Whose trial has people's attention…

Ghislaine Maxwell’s. Yesterday, opening statements began for the former girlfriend and longtime associate of convicted sex offender Jeffrey Epstein. Maxwell’s been accused of recruiting and grooming four underage girls for sexual abuse – including one as young as 14. Maxwell has repeatedly denied wrongdoing. She faces up to 70 years in prison if convicted on all six counts. Here's how yesterday went:

Jack Dorsey. Yesterday, he resigned as Twitter's CEO. In 2006, Dorsey co-founded the social media platform – helping change the way people communicate online in 140 characters or less. Over the years, Dorsey's let the number of characters grow almost as long as his beard. But the company's been subtweeted quite a bit. Including by Republicans who've accused the platform of censoring conservative voices. And from Congress, which has called out its free-flowing misinformation and hate speech. Last year, investors reportedly tried to push Dorsey out the door, saying he shouldn't be splitting his attention with his other company, Square. Now, Dorsey’s saying “it's finally time” to sign off. And that he's been replaced by CTO Parag Agrawal – a 10-year Twitter vet. The move pushed Twitter stock up for a bit. That's it. That's the tweet.

PS: Dorsey's not the only one saying 'bye' to his job (heard of The Great Resignation?). We have some tips on the right way to quit.

Lee Elder. Yesterday, the PGA Tour announced that the first Black golfer to play in the Masters died at age 87. Elder broke down racial barriers, paving the way for other golfers like Tiger Woods. And is being remembered as a "hero" and a "true pioneer in the game of golf."