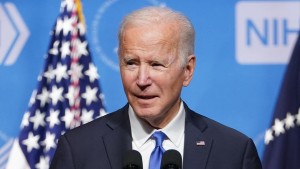 The US has laid out a new pandemic strategy.

Not exactly. Last week, health officials in South Africa identified a new variant: Omicron. And ‘til there’s more info on it, some world leaders are rethinking their approach to the pandemic. Germany announced a lockdown for the unvaxxed. Israel and Japan have closed their borders. The US has already confirmed Omicron cases in five states...and more will likely follow, which has sent the stock market tumbling. Now, the Biden admin is hitting refresh on the US’s pandemic measures.

What are the deets?

President Biden shared plans for hundreds of new vaccination sites and a push for boosters (which all vaxxed US adults are eligible for). And as early as next week, the US will be requiring all international travelers — regardless of vax status — to test negative for COVID-19 within a day of departure. A mask mandate on public transportation is also being extended through mid-March. There's a plan to provide more at-home testing kits – and have insurers reimburse the cost. But guidance on what that reimbursement process will look like won’t be out ‘til Jan 15.

Health experts are welcoming the updates. But many are getting impatient and calling on the gov to get those vax sites up before Santa's sleigh hits rooftops. And say testing and screening are also key. Meanwhile, Dr. Anthony Fauci said those who are fully vaxxed should be fine, but should get a booster shot “now.” And the White House isn't leaving anything "off the table" in terms of protections...meaning domestic travel restrictions could be an unwelcome gift under the tree.

South Africa's already seeing an exponential increase in cases driven by Omicron. It's a warning to the rest of the world that there could soon be a new dominant variant in town. And may nudge those who haven't been vaxxed to get the job done.

PS: Here's what we know (and don't know) about the Omicron variant.

“Remain in Mexico.” Yesterday, the Biden admin said it reached a deal with the Mexican gov to re-implement the controversial Trump-era  immigration policy. Under the former president, Remain in Mexico sent more than 60,000 asylum seekers to Mexico while their asylum claims were being processed. The move exposed them to gangs, kidnappers, and even rape. On his first day in office, President Biden suspended the “inhumane” policy. But Missouri and Texas sued. And the courts (including SCOTUS) forced the admin to restart the policy. Now, Remain in Mexico’s expected to start back up on Monday.

...Oh and speaking of new moves, Congress passed a bill to fund the gov into early next year – narrowly avoiding a shutdown for the second time in a year. Nothing like procrastination.

California. Earlier this week, state officials announced that water agencies serving 27 million residents won’t be getting any water in 2022. Except for critical health and safety. Every year, districts across the Golden State apparently submit requests for water to the state. And then the water is divided depending on how much snow and rainfall California gets. Well, the state’s been under a historic drought. The past year has been the second driest in CA history. Now, the state’s apparently saying districts won't be getting water for things like irrigation, landscaping, and gardening. And that if things continue to get worse, the state may have to bring back some intense conservation measures. Think: fining people for not reducing their water usage, shorter showers, and more.

Planned Parenthood's hacking. This week, the org’s LA branch said it suffered a ransomware attack. And that it compromised the info of about 400,000 patients. It’s unclear who carried out the attack. But they got access to personal information, including addresses and “clinical” info like the type of procedure people received. It comes amid a broader uptick in ransomware attacks. And has raised concerns about possible extortion.

Who's learning you can't always fake it till you make it...

What’s got us texting the “Selling Sunset” crew again…