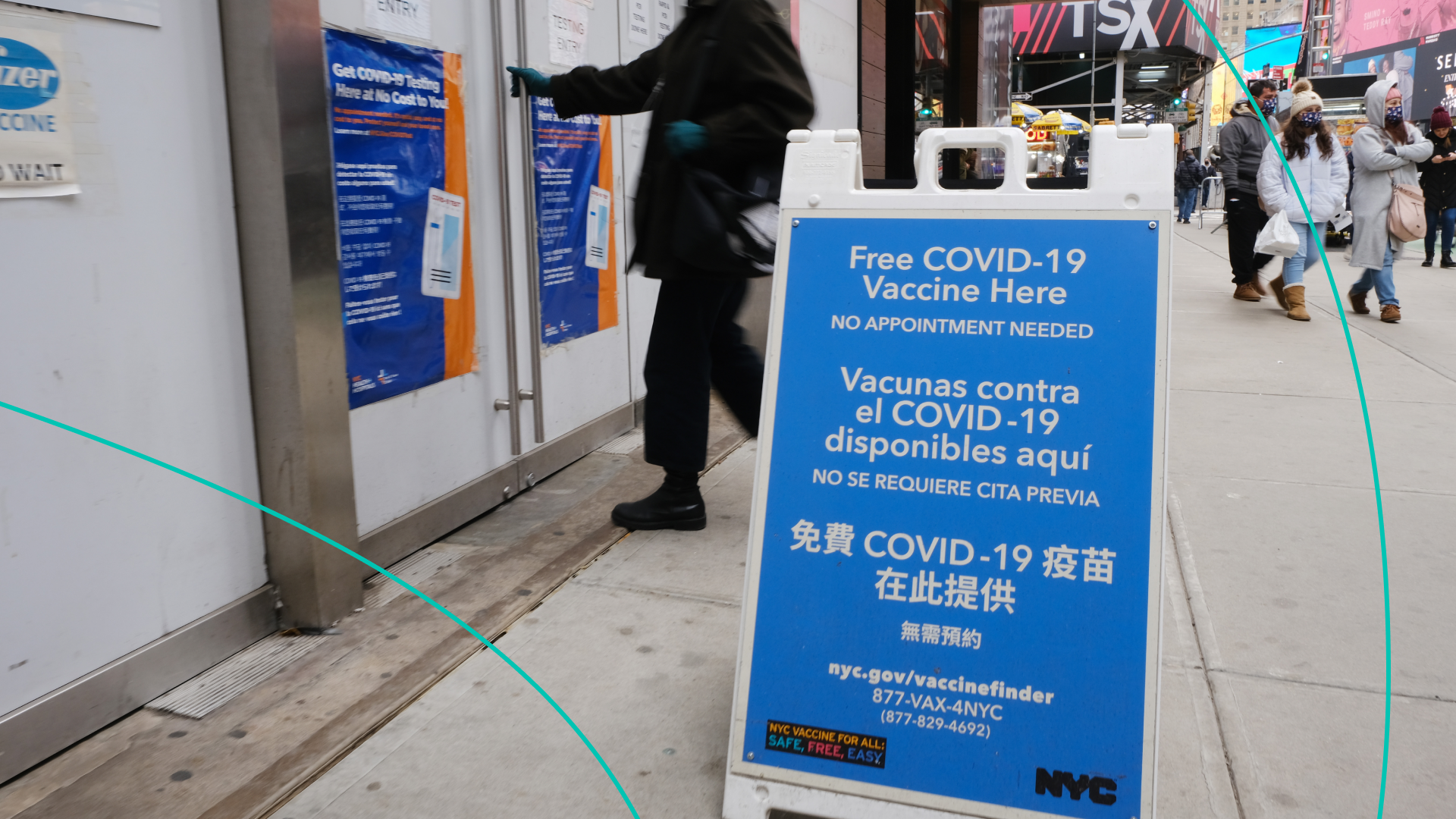 Omicron is exploding across the US.

Yes. Other countries are ahead in their curves: Yesterday, the UK reported its highest daily count of COVID-19 cases, ever. The variant is expected to be dominant in the EU and US as soon as next month. Considering Omicron was first ID’d late last month, you can imagine how fast it’s moving. This week, a picture is starting to emerge on how effective vaccines are against it.

All three US-authorized vaccines seem to be taking a major hit at preventing infection (think: down to around 30-40% efficacy). So if you were hoping to just coast by with that one dose, think again. But two doses of Pfizer may still provide robust protection against hospitalization. And a booster can help…a lot. Research from the UK and Israel indicates that three doses may reduce cases of symptomatic disease by as much as 75%. And there’s more good news.

This week, Pfizer said that a clinical trial showed its COVID-19 treatment pill (Paxlovid) can reduce hospitalization and death by 89% if administered within five days of symptoms. And sent it over to the FDA for approval. More good news: Pfizer says lab data shows it might also be effective against Omicron. But time will tell. And time is of the essence, with the variant racing across the globe.

There’s still a lot we don’t know about Omicron. With only one documented death, it may end up being more mild than past variants. But given how fast it spreads, even a mild variant of COVID-19 could put pressure on medical systems – just as the flu and Delta remain a threat.

PS: Here's what we know (and don't know) about the omicron variant.

Derek Chauvin. Yesterday, the former Minneapolis police officer pleaded guilty to violating the civil rights of George Floyd. It marked the first time Chauvin admitted to putting his knee on Floyd’s neck in May of 2020, killing him – and sparking a national reckoning over systemic racism. The plea means Chauvin avoids a life sentence. Instead, he faces 20 to 25 years in prison, which he could serve at the same time as the 22.5 years he’s now serving. Chauvin also pleaded guilty to a separate case dating back to 2017, when he similarly put his knee on a 14-year-old boy’s neck even as the boy was handcuffed. Based on the sentencing, the earliest Chauvin could be released from prison is around 2042.

Keechant Sewell. Yesterday, Mayor-elect Eric Adams announced Sewell will become the city’s first female police commissioner. Sewell has served with the Nassau County Police Department on Long Island for decades and was promoted to chief of detectives last year. Now, she's breaking the barrier as NYPD's first Black woman to take on the nation’s largest police department – amid a rise in violent crime. The decision comes at a critical time when America's policing has been put under a microscope and as calls to defund the police have grown louder. Sewell said she is committed to making sure NYC’s police dept “looks like the city it serves.”

bell hooks. Yesterday, Gloria Jean Watkins – the acclaimed author, poet, feminist, and professor behind the pen name bell hooks – died at her home in Kentucky. The 69-year-old wrote around 40 books – including “Ain’t I a Woman? Black Women and Feminism” and “All About Love” – that explored race, feminism, and capitalism. Tributes poured in from across the literary world, with Ibram X Kendi saying the loss "hurts, deeply" and Roxane Gay calling the loss "incalculable."

The Fed. Yesterday, the Federal Reserve said it's going to end pandemic-era bond purchases by March 2022 to curb rising inflation. And told everyone they expect three rate hikes next year...and apparently three more in 2023 and two more in 2024. Stock markets said 'yup, sounds about right' – and bounced up on the Fed’s news.

PS: Here's a refresher on inflation. And another on how the federal funds rate affects your savings, debt, and homebuying plans.