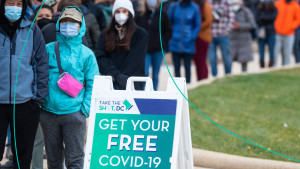 Nobody had Omicron on their holiday wish list. But it's here.

The COVID-19 variant has now been ID'd in all 50 states. And is the dominant strain, accounting for nearly three-fourths of new cases. Breakthrough cases are up, with vaccines potentially down to 30-40% efficacy against infection (but higher against severe disease). Earlier this week, President Biden announced a new line of defense. Think: vax clinics for boosters and more testing sites. Not the gifts we were expecting, but we'll take it. Some health experts say it isn’t enough. But now, there’s a new COVID-19 treatment on the horizon.

Yesterday, the FDA granted emergency authorization for Pfizer's Paxlovid. Read: the first at-home treatment for COVID-19. Anyone over the age of 12 and at high risk of severe illness who tests positive can get a prescription. Data shows the pill can cut hospitalizations and death by almost 90%. And they're expected to work against Omicron, too. The US bought 10 million courses of the treatment. But only 265,000 will be available in January since it takes at least half a year to manufacture them. Meanwhile, new research indicates Omicron could be much milder than the Delta variant.

It is. But until the data is settled and the pill is widely available, Omicron is forcing a lot of people to make hard decisions. Many are scrambling to get tested before the holidays. Health officials may sound like broken records but they remain adamant: the most effective way to protect yourself and others is to get vaccinated, including a booster shot. For those who are able to see family, keep in mind: air travel is expected to surpass Thanksgiving travel highs. If you're hunkering down at home, take care of yourself. You can curl up with a good book, get back into organization mode or make a quarantini.

COVID-19 is foiling a lot of holiday plans. But we are not back where we were in 2020. Vaxx up, mask up and cheer up — or at least treat yourself to something that might.

PS: If you test positive, we get into what to do next in today’s episode of “Skimm This.” Think: everything from whether to get takeout to who to text. Tune in tonight at 5pm ET.

President Biden. Yesterday, he announced plans to extend the pause on student loan payments until May 1. They’ve been on hold since the early days of the pandemic, allowing borrowers to avoid adding interest if they need some more time to get the money together. The hold has been extended four times already. And the payments were set to pick back up on February 1. Now, the extension could be a saving grace for about 41 million borrowers — reportedly 27 million of which haven’t been paying their bill since early 2020. Biden said millions of student loan borrowers “are still coping with the impacts of the pandemic.” Progressive Dems are saying 'ok, but remember your plan to actually cancel some student debt?' And pointing to the positive impact the move could have on Black wealth. Republicans are saying 'the money has to come from somewhere.' And don't want other taxpayers to have to foot the bill.

PS: Check out our guide on managing student loans in the pandemic.

What’s under the microscope…

Astroworld. Yesterday, the House Committee on Oversight and Reform launched an investigation into the deadly music festival. Last month, about 50,000 people gathered to attend Travis Scott’s sold-out concert in Houston, TX. But a massive crowd surge left 10 people dead and hundreds injured. Many are wondering what safety measures could have prevented this. And victims and their families have filed about 300 lawsuits. Now, committee members are looking into what led up to the tragedy. They cited concerns that security and medical staff were "inexperienced." And want answers on what exactly the event organizer (Live Nation) did to prepare for the concert. The company has until next month to provide some answers.

PS: In a recent episode of "Pop Cultured," we talked about what happened at Astroworld, the culture Travis Scott has created around his shows, and the possible legal consequences.

While navigating tough political convos over the holidays…

Here’s some tips on how to talk about your personal reproductive choices.