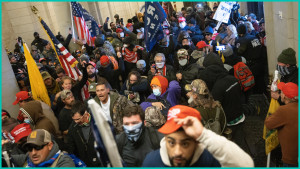 It's been nearly one year since the Jan 6 insurrection. The US is still finding its footing.

That day, a mob of pro-Trump supporters stormed the US Capitol. It was the biggest attack on the Capitol since 1814. Five people were killed, officers were wounded physically and mentally, and our nation was left reeling. A lot has happened since then, including more than 700 arrests and the formation of the Select Committee to investigate the attack.

Yesterday, Pentagon officials issued rules to crack down on extremism in the military. The plan comes after dozens of military members were reportedly found to have ties to extremist activity in the past year. And as dozens of veterans and about half a dozen active duty service members were found to have participated in the Jan 6 insurrection. Now, Pentagon officials want to shut it down. So they're homing in on their definition of extremist behavior and issuing new guidance for what service members can and can't do — in person and on social media.

Advocating terrorism or liking extremist content on social media? That goes in the 'not okay' category. The Pentagon says it's necessary to root out extremism, even if the number of cases remain reportedly small. As Defense Secretary Lloyd Austin put it, “even the actions of a few can have an outsized impact.” But others are concerned about whether this would violate First Amendment rights. It comes as the toughest sentence has been handed out in connection to the Jan 6 insurrection. A man from Florida was sentenced to more than five years in prison after attacking police with a wooden plank and a fire extinguisher. The man says he's "really ashamed" of his behavior.

Jan 6, 2021 will forever be a dark day in American history. The military, courts, and House are working to make sure it doesn't ever happen again.

What's worse than the Grinch...

Omicron. Yesterday, the CDC said the COVID-19 variant is officially the dominant variant in the US. Omicron made up 73% of all US cases last week and is doubling roughly every two days. Today, President Biden is set to give a speech at 2:30pm EST on how Americans can protect themselves for the holidays. And he's expected to announce plans to distribute 500 million free at-home tests starting next month. Biden will also reportedly lay out the dangers to unvaccinated Americans above all. While Omicron is believed to bring vaccine efficacy down to 30-40%, the vaccines — and particularly boosters — reportedly still provide significant protection against hospitalizations and deaths. Important, since record-high hospitalizations are expected in the coming weeks.

PS: Here's what we know about the omicron variant.

Donald Trump. Yesterday, the former president filed a lawsuit against New York Attorney General Letitia James (D). Since 2019, James has been pushing for access to the president's tax returns, as part of an investigation into whether the Trump Org worked to inflate assets when applying for loans and mortgages. And deflate them when it came time to pay taxes. The latest: a grand jury investigated one of Trump's former accountants. And James indicated she wants to question Trump under oath next month. Now, Trump's suit claims that James' fraud investigation into the Trump Org is politically motivated. And asks for James’ investigation to be limited or halted. The AG says her investigation will continue “undeterred.”

Who’s got more to say…

Peng Shuai. Last month the tennis star disappeared for 18 days after accusing a former Communist Party official of sexual assault on social media. Now, Shuai is retracting the claim. In an interview earlier this week, she said people had “many misunderstandings” about the post. But many are concerned that she's only changing the story after pressure from Chinese officials. The IOC said they are having a personal meeting with Shuai next month as they remain concerned about the situation.

Who's taking the medical and NFT world by storm...

Psst…Here’s what you need to know before investing.

Why dry shampoo might not always be your best friend...