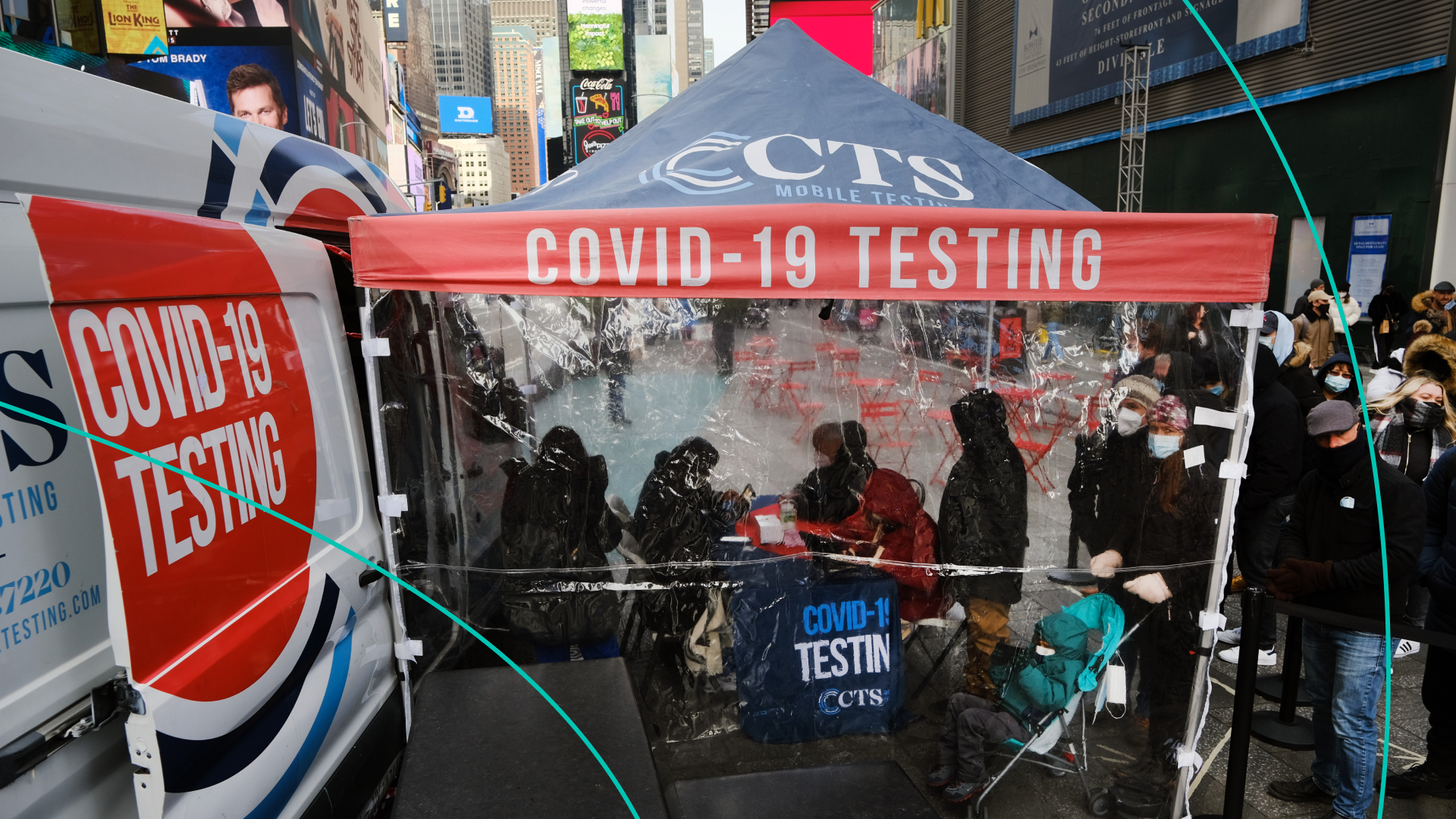 Americans are feeling hopeful for 2022. But COVID-19 isn’t in the rearview mirror just yet.

COVID-19 cases are exploding across the US. In Florida, cases jumped to more than 900% in just two weeks. And hospitalizations for kids are rising. Early studies indicate that Omicron — the dominant variant in the US — tends to produce less severe disease than Delta. Still, more than 1,000 Americans are dying every day. And Delta hasn't gone away.

When will this nightmare be over?

It's a good question. In the meantime, the CDC has thrown up its (thoroughly washed) hands and said most Americans can cut quarantine in half, no negative test needed. The FDA threw question marks all over the efficacy of rapid tests to detect Omicron — even though experts are still calling them an important public health tool. And some immunocompromised Americans are reportedly turning to unauthorized additional shots. It's a mess. But 12- to 15-year-olds can get boosters now. So there's that.

How do I protect myself?

Omicron is extremely transmissible (potentially more than Delta). You can do everything right — vaccines, boosters, masks — and still get it. So if you're hoping to sit this wave out, keep in mind: that 2020 cloth mask from Etsy may not cut it. A tight-fitting N95 or KN95 mask can help. And testing is still the best way we know to add an extra layer of protection — if you can get them.

No one wanted to be at this stage of the pandemic in 2022. But here we are. Good luck, stay safe, and take care of those around you.

Elizabeth Holmes. Yesterday, a jury found the former Theranos founder and CEO guilty of four counts of fraud. In the 2010s, Theranos was the hot Silicon Valley blood-testing startup valued as high as $9 billion. One problem: the tech wasn’t able to deliver. But Theranos investors also wanted some money back. Now, after a drawn-out trial, a jury has found Holmes guilty of four counts of wire fraud. She faces up to 20 years in prison for each count as well as potentially hundreds of thousands of dollars in fines.

Who’s got his legal team suited up…

Prince Andrew. Today, his lawyers are asking a New York court to dismiss a lawsuit accusing him of sexual assault. Virginia Giuffre — one of Jeffrey Epstein’s most outspoken accusers — alleges that the incident happened when she was 17 years old. The prince — who was friendly with convicted sex offender Jeffrey Epstein — denies the allegations. But has yet to explain the photograph taken with a young Giuffre and Ghislaine Maxwell, Epstein’s former girlfriend, in 2001. Maxwell was convicted of sex trafficking last week. And yesterday, a 2009 settlement between Giuffre and Epstein was unsealed. Now, Prince Andrew’s attorneys are reportedly set to argue that her lawsuit violates the terms of that settlement.

Where people are paying attention…

Colorado. The wildfires, which started last Thursday, damaged around 1,000 homes and more than 6,000 acres in Boulder County. Reportedly, they may have been the most damaging fires in the history of the state. The two people still missing are feared dead. And climate change could have fueled the blaze. President Biden declared the event a major disaster and has freed up federal funds to help recovery efforts. Colorado Gov. Jared Polis (D) said that they would build back stronger because “we are Colorado strong.”

Who’s out of the game…

Antonio Brown. This week, the Tampa Bay Buccaneers said Brown is “no longer a Buc” after the wide receiver took off his jersey and exited the field during a football game. Brown had reportedly been dealing with an ankle injury and left in frustration because he was too hurt to play. It was Brown’s second game since being suspended for violating COVID-19 protocols last month.