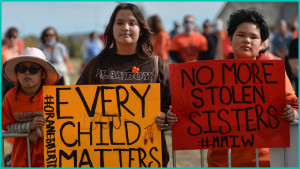 Canada just reached the largest settlement in its history.

Since the 1990s, tens of thousands of Indigenous children have been separated from their parents and placed in state care. In many cases, these families were suffering from issues like poverty, not abuse. But the Canadian government did not fund services on reserves as it did for non-Indigenous children. (Think: Indigenous children reportedly received “70 cents on the dollar” compared to other Canadian kids.) And so the kids were removed from their homes. Other Indigenous kids experienced different forms of discrimination like delays in state services.

It is. Only 7% of Canadian children are Indigenous but Indigenous kids represent more than half of those in foster care. After years of advocacy from Indigenous groups, the Canadian Human Rights Tribunal in 2016 found that the gov’s practices were, in fact, discriminatory. Now, Canada has agreed to pay $31.5 billion. If the deal goes through, half of that money will go to an estimated 200,000 Indigenous children and their families. The other half will go toward reforms — like helping children aging out of the system and better on-reserve housing. But this is Canada's latest acknowledgment of injustice.

Canada has a long history of violence toward Indigenous communities. From the 1880s to the 1990s, an estimated 150,000 Indigenous children were forcibly removed from their families and put in boarding schools. It’s a practice the country’s Truth and Reconciliation Commission has called “cultural genocide.” Many were abused — and unmarked graves are still being discovered to this day. The abuse extends beyond the treatment of Indigenous children. Just last month, the government settled a lawsuit over contaminated water on Indigenous reserves.

No amount of money can address the decades of trauma Canada’s Indigenous community has had to endure from family separation — first through residential schools and now through foster care. And yet, that is what Canada’s government is offering.

Tesla. The EV company is facing backlash after opening a showroom last week in China’s Xinjiang region. Since 2017, the Chinese gov has cracked down on Uyghurs and other ethnic minorities in the country’s northwest, detaining more than 1 million people. There've been reports that Uyghurs have been kept in forced labor camps and that women have been sterilized. Last month, Congress passed legislation banning all imports from the region unless businesses can prove the goods were made without forced labor. But Tesla enjoys a lot of privileges in China, including getting to operate a factory there without Chinese involvement. Now, human rights groups and US politicians like Sen. Marco Rubio (R-FL) are calling the company out for helping to “cover up genocide and slave labor in the region.” And telling Tesla to pull out.

Andrew Cuomo. Yesterday, a New York DA said his office won’t be pursuing a misdemeanor sex crime charge against the former New York governor. Last summer, an investigation found that the governor sexually harassed at least 11 women – including an executive assistant. The woman, Brittany Commisso, had accused Cuomo of forcibly placing his hand under her blouse in 2020. And filed a criminal complaint against him. Cuomo has consistently denied the allegation. Now, prosecutors say that while the survivor was "cooperative" and "credible," the DA would not be able to prove the crime happened “beyond a reasonable doubt” during a trial. Commisso's lawyer said she plans to take this to civil court. Cuomo has not responded.

Who people are hitting back at…

Novak Djokovic. Yesterday, the Australian Open said the tennis star had a medical exemption from their COVID-19 vaccine requirement — allowing Djokovic to play later this month. The tennis competition still requires all other players and staff to be vaccinated (pending an exemption). But the move's got people saying Djokovic — who's a vaccine skeptic — is getting special treatment. And has others saying he's really living up to his nickname “NoVax.”

Who’s the new (American) girl on the shelf…