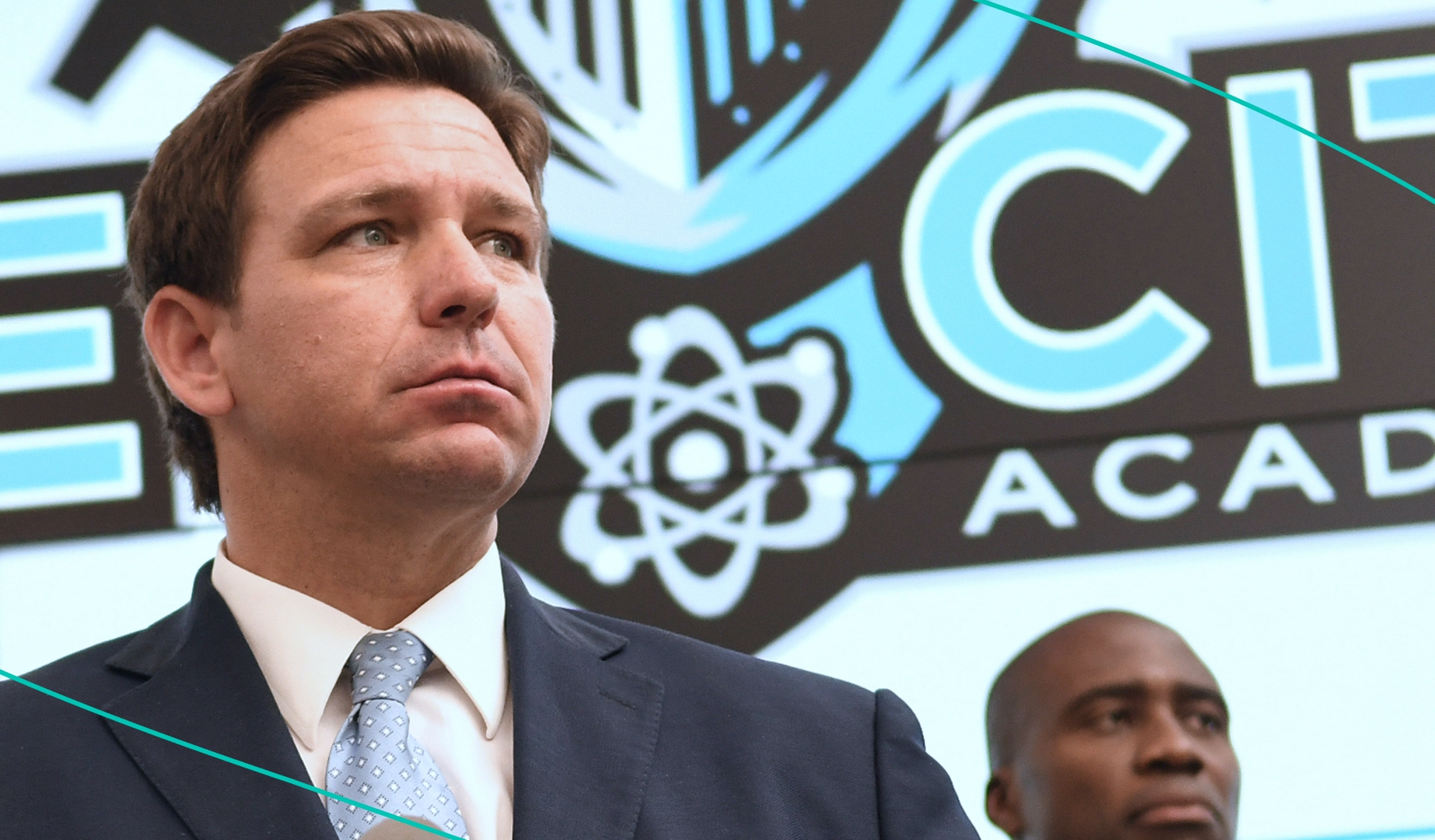 Yesterday, the state’s surgeon general contradicted CDC guidance and recommend against COVID-19 vaccines for healthy kids. The announcement came during a roundtable hosted by Gov. Ron DeSantis (R) — who has banned mask requirements at schools, opposed vaccine mandates, and more.

So what’s the latest?

Florida’s surgeon general, Dr. Joseph Ladapo, says we’re “scraping at the bottom of the barrel” when it comes to quantifying the benefit of vaccines for kids. The news comes as new COVID-19 cases in the US are down. And as many states have largely eased restrictions this year. Studies have shown that vaccines may struggle to protect kids against infection. And that children are also significantly less likely than adults to get severe illness.

And yet the CDC is recommending the opposite…

Right. Breakthrough infections happen. But vaccines continue to prove effective at preventing hospitalization and death. That includes 91% efficacy against symptomatic illness for kids ages 5 to 11. And with close to 1,000 children ages 5 and up in the US having died from COVID-19. We’re also still learning about the potential impacts of long COVID-19. A study this week found that even people with mild cases may show tissue damage and loss of gray matter.

Parents want what’s best for children — and many have been trying to figure out what that looks like. But they’re trying to work it out amid a culture of misinformation. Here are some answers to concerns around vaccines for kids.

Over the weekend, Russian gymnast Ivan Kuliak was criticized for wearing a 'Z' symbol next to a Ukrainian athlete at a World Cup event. It's the same letter Russian tanks have sported as they made their way to Ukraine’s border. Here’s what you need to know…

What it means: It signals support for Russia's invasion. And was first spotted on tanks last month. Some think the letter could stand for "zapad" aka "west." Others are guessing "za pobedy," Russian for "for victory." Some even reportedly see it as shorthand for Russia's No. 1 target: Ukrainian President Volodymyr Zelenskyy. It's raising a lot of eyebrows considering the letter 'z' doesn't show up in the Russian alphabet.

Where it's popping up: Mostly in Russia. It's no secret the Kremlin is fighting a propaganda war. Now, state-funded network RT is reportedly selling merch. Schools are apparently having children line up in Z formations to show support. And one local official even renamed his region to KuZbass so the letter can be included.

More than 4,300 people have been arrested in Russia for protesting the war in Ukraine. And a letter is apparently supposed to help drum up support.

Who’s not facing the Supremes…

Bill Cosby. Yesterday, the Supreme Court said it won’t review a court decision that got Cosby out of prison. More than 60 women accused Cosby of sexual assault or misconduct — dating back to the 1960s. But in 2006, a district attorney promised Cosby he wouldn’t face criminal charges if he made any incriminating statements in a civil case. In 2015, a prosecutor brought charges against Cosby and he was ultimately convicted of indecent assault in 2018. Last year, Pennsylvania’s highest court ruled Cosby’s due process rights were violated as a result. Now, SCOTUS decided it doesn't want to hear the case to possibly reinstate Cosby’s conviction. Meanwhile, Cosby’s maintained his innocence, with a spokesperson calling the decision a “victory.” And Cosby’s apparently considering a final standup tour. The news came the day before International Women's Day, created to celebrate the many achievements of women.

What’s finally made it through Congress…

The Emmett Till Antilynching Act. Yesterday, the Senate unanimously passed a bill that would make lynching a federal hate crime that’s punishable by up to 30 years in prison. It is named after the 14-year-old Black boy who was tortured and murdered in Mississippi in 1955 in a racist attack that sparked the civil rights movement. The House first passed the legislation in 2020 (not a typo). But it failed to pass the Senate after Sen. Rand Paul (R-KY) objected to it arguing the language needed to be strengthened. Now, the passage reportedly comes a century after the first anti-lynching bill was passed. And finally heads to President Biden for signature after lawmakers' 200 attempts to pass similar legislation.

Where progress is being made…

﻿The Philippines. Yesterday, the country’s President Rodrigo Duterte reportedly signed into law a bill that raises the minimum age of sexual consent from 12 to 16 to protect minors from rape and sexual abuse. UNICEF found that the Philippines had one of the world’s lowest minimum ages of sexual consent — reportedly only behind Nigeria. A UN report also found that over 20 countries have laws that allow rapists to marry their victims to avoid prosecution. Think: Russia, Thailand, and Venezuela. Now, the law reportedly says anyone who is engaging in sexual contact with someone under 16 would be committing statutory rape. Unless, the age difference is within three years, it was consensual, and not abusive or exploitative.

Who people want answers about…

The US gov. Here's how to order a few more.