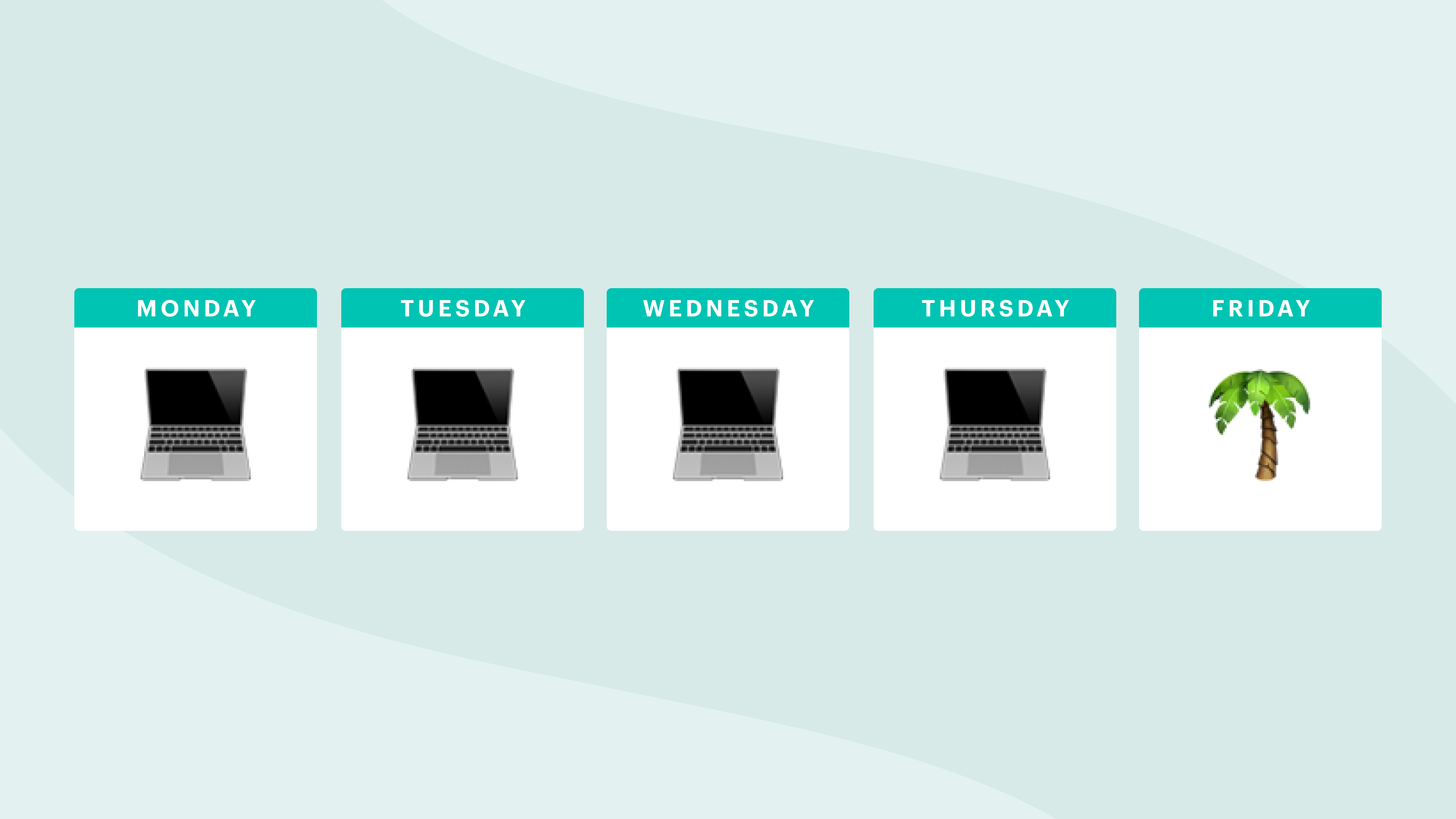 The US is testing out a new work model: four-day weeks.

So do the majority of Americans. Starting today, dozens of companies in the US and Canada are taking part in a global trial to see how four-day work weeks...work. The test: what happens when employees turn in the same amount of work in less time. Advocates point to potential benefits of a reduced work week like higher employee satisfaction, less commute time, and potentially more childcare savings. But some worry the crunch could add to higher pressure and anxiety. Others anticipate productivity taking a hit.

Tell me more about this trial.

35 companies (including Kickstarter) are taking part. It’s being run by 4-Day Week Global — a New Zealand-based nonprofit. And will last six months. The org says that the pandemic has “made it clear we can find a better balance between work and life.” It comes as countries like Belgium, Japan, and Spain have already been testing the waters. And as lawmakers from California to Pennsylvania this month are also pushing to make it happen.

So…should I plan to be off on Fridays sometime soon?

Not necessarily. A report from earlier this year found that there were only 1,700 US jobs advertising four-day work weeks for every million listed on Indeed.com. But the trial could help pave the way for more companies to take note.

The pandemic has reshaped much of what work looks like in the US — ranging from a jump in Americans working from home to the Great Resignation. Now, the four-day workweek may prove the next frontier for a changing labor landscape, as employees are forced to compete with each other to retain talent.

Who’s stepping on the gas…

Russia. Starting today, Russian President Vladimir Putin is threatening to cut off “unfriendly” countries that don’t pay for their gas in rubles. When Russia invaded Ukraine, Western countries responded with sanctions, stressing Russia’s economy. That’s why Russia — which supplies Europe with 40% of its gas — wants to give its national currency a boost. But so far European countries are saying ‘nope,’ with Germany calling the move “blackmail.”

President Biden. Yesterday, he said ‘release the fracken,’ ordering the release of 1 million barrels of oil per day from the national stockpile for the next six months. The goal: offset the high gas prices. And pressure US oil companies to ramp up production themselves. It’s not clear how much this will impact costs at the pump. (Think: Biden has released millions of barrels in reserves since November with little success on gas prices.) But Biden is hoping it will lower prices between 10-35¢ per gallon.

The human genome. Yesterday, researchers announced they’d finished a complete map of a human genome (aka genetic code). The project dates back to 1990. By the early 2000s, scientists had sequenced a whopping 92%. Now, the last 8% is done. Scientists say having this in-depth look will allow them to better understand human biology. It could also give way to greater medical discoveries, potentially even opening the door wider to individualized medicine.

Why people are saying ‘NSFW’...

What to wish your friends this weekend…