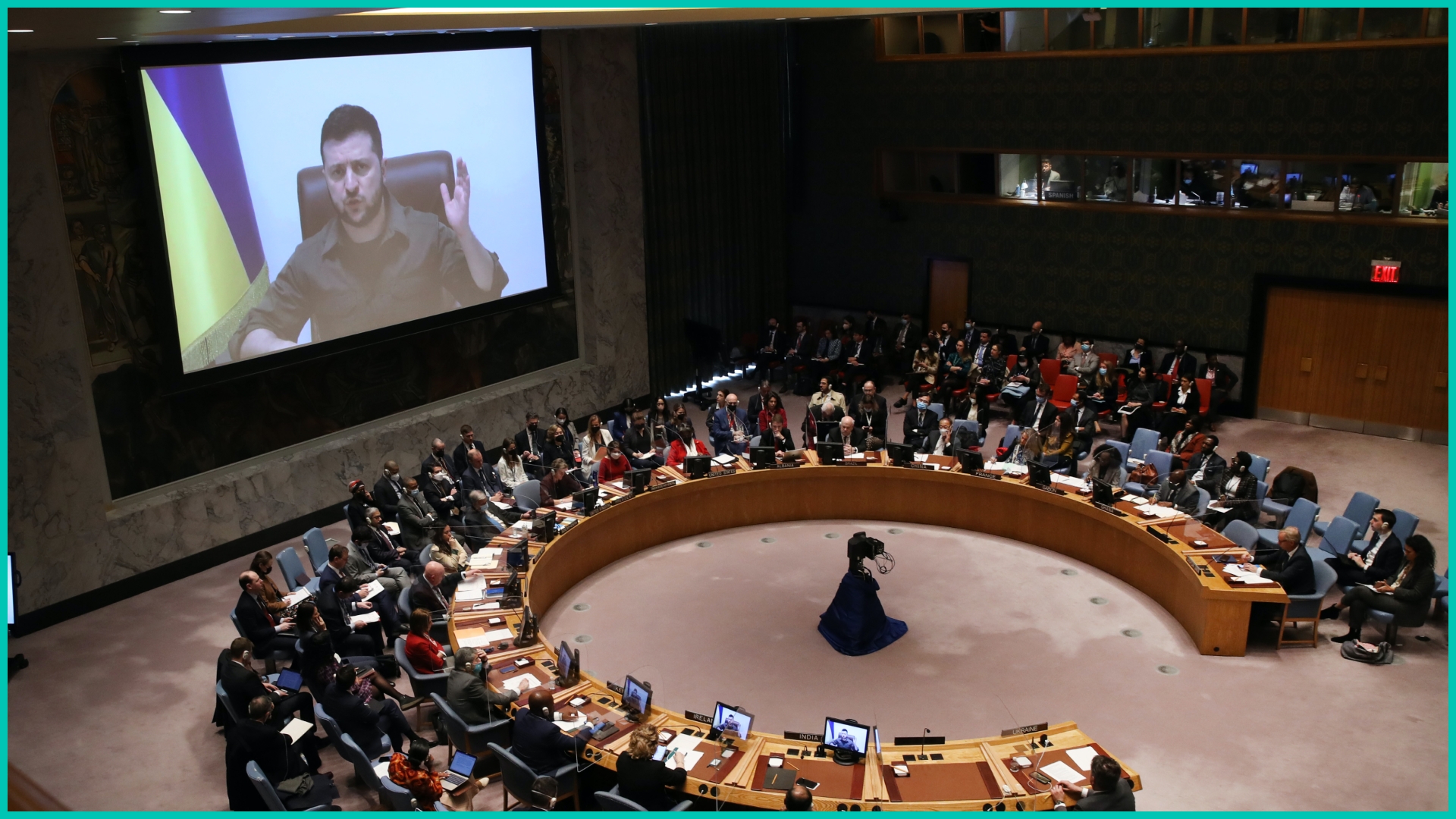 Yesterday, Ukrainian President Volodymyr Zelenskyy spoke to the UN Security Council about the atrocities in Ukraine. Since Russia invaded Ukraine in February, nearly 1,500 civilians have died and millions have been displaced. Now, Zelenskyy has accused Russian forces of torturing and killing at least 300 civilians in Bucha, a suburb northwest of Kyiv. And is calling on the council to either revoke Russia’s membership or “dissolve” itself.

Russia is a permanent member of the Security Council and has veto power. Under UN rules, the five permanent countries must agree in order to pass a resolution. If Russia differs, it's allowed to block it — including on its war on Ukraine.

There's more. During his speech, Zelenskyy echoed what many Western leaders have already condemned: that Russia has committed war crimes including purposefully killing civilians, torture, and rape. And he’s calling for those responsible to be brought up in front of a tribunal — Nuremberg-style.

The Kremlin maintains that the Bucha allegations are “another staged performance” by the Ukrainians. And that the killings happened after they retreated last week. But Western news outlets have gotten access to satellite images showing bodies on the streets of Bucha that have been there for weeks, while it was under Russian control.

The UN's mission is to maintain international peace and security. But it’s failed to protect countries like Rwanda and Bosnia. Now, as one of its permanent members becomes the aggressor, Zelenskyy is calling on the committee to look within.

Where lawmakers have made a change…

Oklahoma. Yesterday, the state House voted to pass a near-total abortion ban. The legislation would make performing an abortion a felony. Providers could face up to 10 years in prison. The bill has already cleared the Senate. And now, it heads to Gov. Kevin Stitt’s (R) desk, who's expected to sign it. The law would go into effect in August...after the Supreme Court is set to weigh in on Roe v Wade. It comes as some states — like Colorado and New Jersey — have taken to enshrine abortion rights on the state level. And as others have passed near-total abortion bans. Speaking of...

Who’s got a major update…

The EPA. Yesterday, the agency proposed to completely ban the manufacture and import of asbestos. There’s currently only one known form of asbestos being imported into the US. It’s used for things like roofing materials, gaskets, and brake pads. But asbestos is also a known carcinogen — linked to nearly 40,000 US deaths per year and different forms of cancer. Now, this could be the first time the gov is taking major action against asbestos since 1989.

…Oh and speaking of updates, the EPA is reportedly updating its definition of a “forever chemical.” But it excludes some of the most widely used compounds.

Elon Musk. Yesterday, Twitter announced it invited the Tesla CEO to join its board. Earlier this week, an SEC filing disclosed that Musk bought a 9% stake in Twitter — making him the largest shareholder. Twitter co-founder Jack Dorsey said he’s wanted the billionaire on the board “for a long time.” And CEO Parag Agrawal said Musk “would bring great value.” Musk has accused the platform of limiting free speech. Now, he gets to pull up a seat — or dare we say, tweet — at the table. Full send.

Student loans. Today, the White House plans to extend its student loan moratorium through August 31. This pause could affect more than 43 million Americans who owe more than $1.6 trillion combined. Still no word on student loan forgiveness…

PS: While you've got the time, use our tips to stay on top of your student loans (even if you're not making payments).

Who has us coming out of our shells...

Who we can't keep up with…