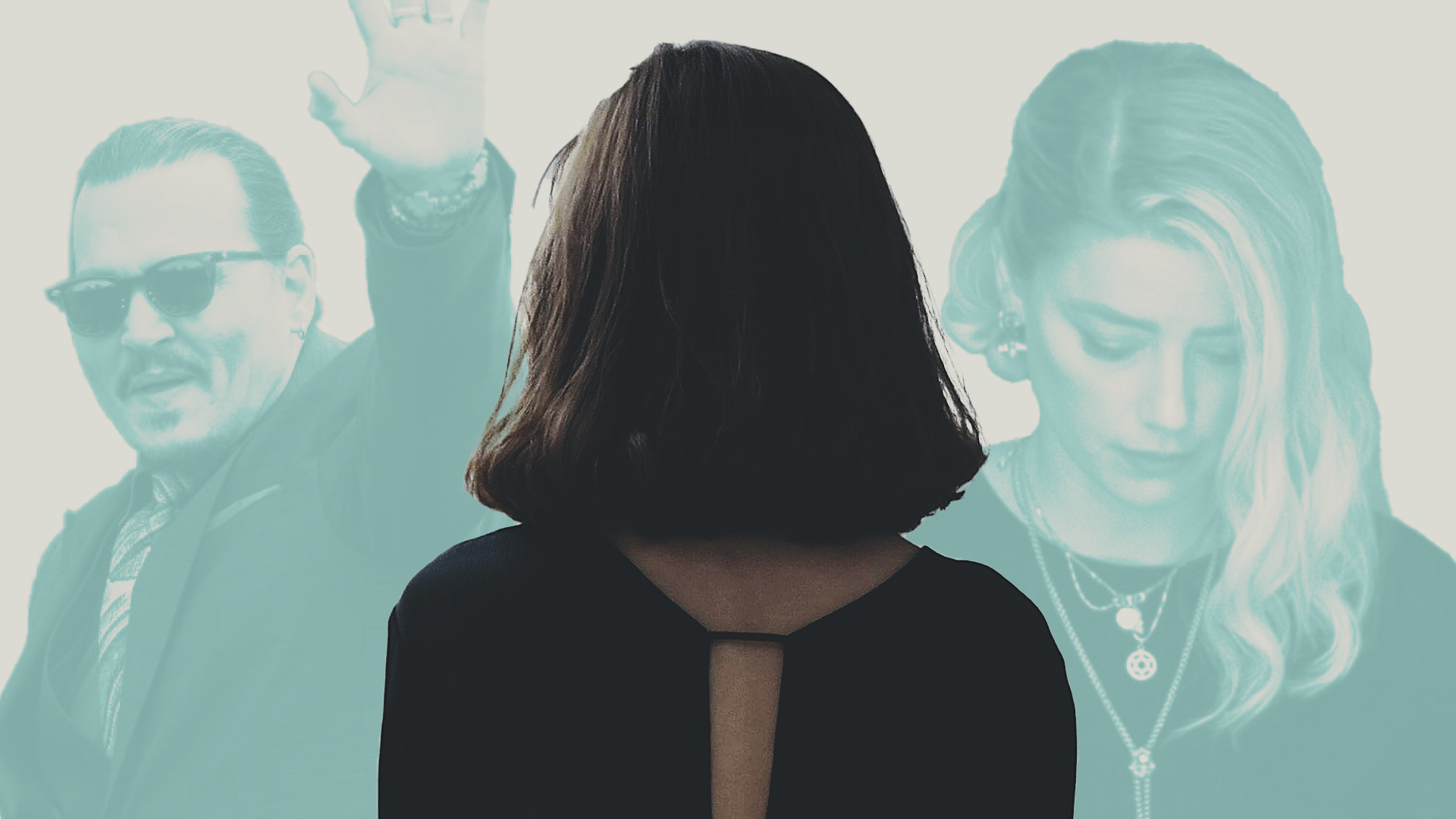 Depp v. Heard: The trial nobody could avoid is over. The conversations that it triggered about abuse, domestic violence, and #MeToo will continue. But let’s not make a movement of millions about two celebrities.

From every angle, the Johnny Depp-Amber Heard trial was a spectacle. And thanks to the live courtroom cameras — rare during trials centering on allegations of domestic abuse — every glance and gesture could be spliced, captioned, and shared on all corners of social media. Which, domestic violence orgs warn, could have a “chilling effect” on survivors.

We don’t have to tell you that Heard was vilified on social media. A staggering level of hate toward the actress, from men’s rights ‘activists’ and Depp’s fans, flooded TikTok, Instagram, YouTube, and Twitter for weeks. And the virality was unrelenting. The Depp-Heard trial seemed to end largely in Depp’s favor. While the jury found defamation on both sides, Depp was awarded more money. Still, some experts have brought up inconsistencies in the verdict, and Heard plans to appeal. Regardless of what happens, damage has already been done.

Reminder: The Depp-Heard trial was a pair of defamation lawsuits. It wasn't a criminal domestic violence case. But retaliation — even just the threat of it — has long been a textbook part of abusers’ playbooks, according to experts. Now, advocates worry that after watching the Depp-Heard trial, abuse survivors will be even more afraid to come forward publicly. Not just because they might not be believed. But because they fear being mocked, humiliated, and maligned. Even sued. Particularly if similar headline-making defamation cases move forward. See: Marilyn Manson suing Evan Rachel Wood. And Dave Portnoy suing Insider.

You said it. Some fear that the Depp-Heard trial could set a dangerous precedent for defamation cases. But others say survivors shouldn’t be deterred from speaking the truth (or reporting it to the authorities) because of one sensational celebrity case. Legally, defamation is defined as a person knowingly publishing or communicating lies about someone else to hurt their reputation (which can include social media). Though in reality, even when the accusations are true, an alleged abuser can still drag you into court. It’s just one more tool that abusers can wield. But survivors can also take abusers to court if they're accused of making things up.

The staggering fact is that 1 in 3 women — and 1 in 4 men — in the US experience domestic violence. Those numbers are almost certainly higher, since it’s estimated that nearly half of all incidents might go unreported, according to the DOJ. Remember: There are resources and laws in place to protect survivors. And the movement to speak out has come too far to start taking steps back.

The Euphoria of Elliot Page…in his own words, the Oscar-nominated actor offers an intimate look into his life as one of the world’s most famous transgender men.

How Bodegas Became Cultural Centers for Beauty…an ode to coming of age, and New York's most special stores.

The Women of 'The Janes' Risked It All…a new documentary shines a light on the underground network of women who provided affordable and safe abortions in the days before Roe v. Wade.

Summer is (unofficially) here. And after two years of pandemic-related postponements and delays, you might be ready to make up for lost time with an adventure far from home. It’s a trend that experts are describing as “revenge travel.” And to help make sure your revenge is sweet, here are travel itineraries for just about every interest. (Don't forget these smart travel accessories or flying essentials.)

Love to get lost in a great TV show? Consider a trip that’ll let you live out your favorite stories. You could attend a tea fit for Queen Charlotte in “Bridgerton.” You could traverse the Scottish Highlands à la lovestruck time travelers in “Outlander.” Or you could take a “Yellowstone”-inspired trip to, yes, Yellowstone.

More in tune with nature than TV? Try a birding excursion. Think: days filled with IDing wingspans and the calls of the wild (don’t forget your bins!) and nights spent sleeping in the trees. Or you could take a star trek to one of the country’s stellar Dark Sky Preserves.

Traveling during Pride Month? Visit the landmarks where LGBTQ+ history was made, either in the US or abroad. (If you’re staying stateside, make sure to support queer-owned businesses along the way.)

And if you consider meals to be the highlight of any trip, visit the best diners in every state, which are guaranteed to leave you feeling full. Ready, set, away you go!

PS: We answered your Qs about summer travel — from dealing with COVID-19 testing requirements, to whether flight and gas costs will go down, and more.

There are some buzzy Senate (see: Iowa) and Gov (see: New Mexico) primaries this week. But most of the attention is on House races, thanks to newly redrawn congressional maps after redistricting. Like in…