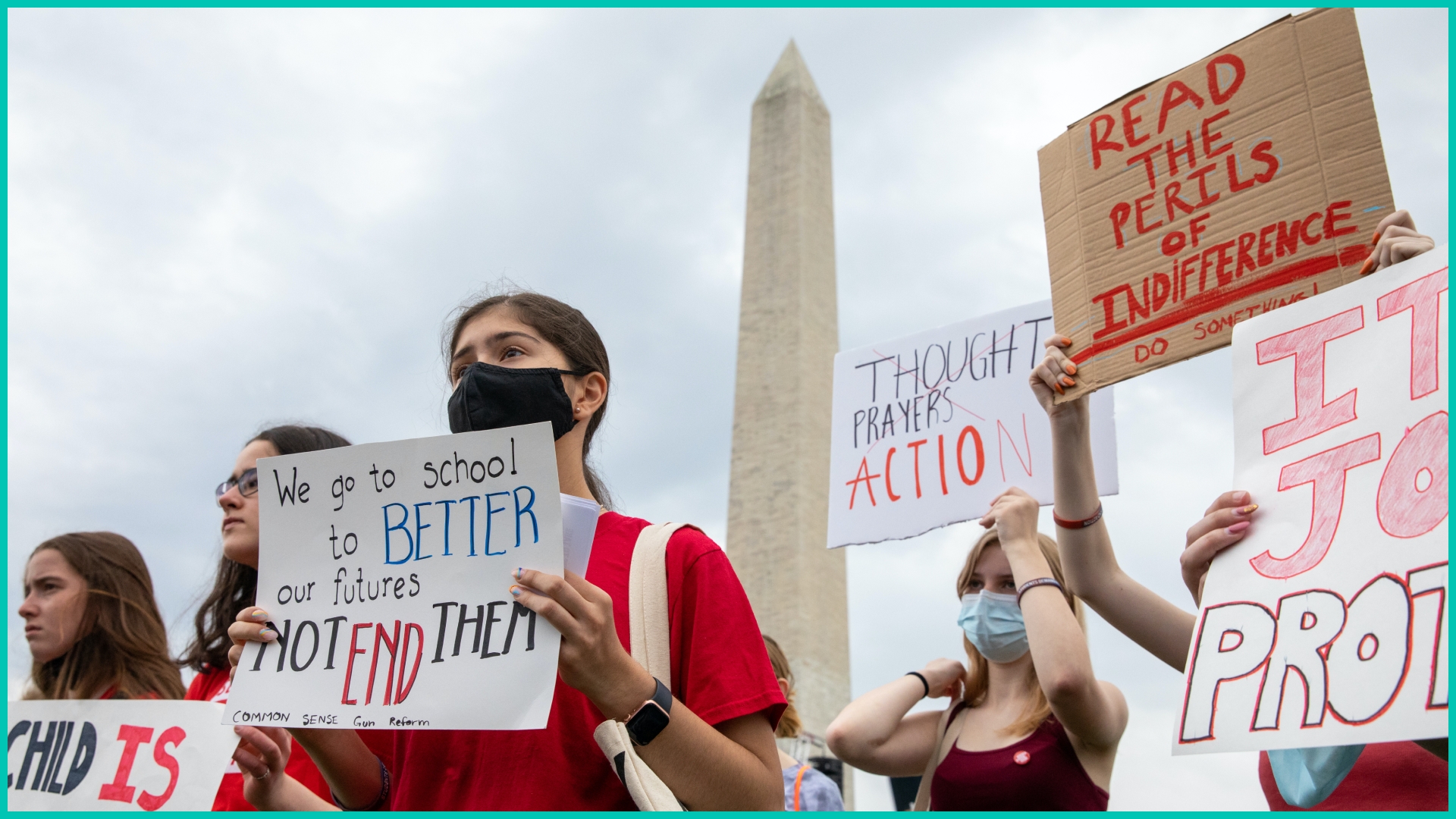 Some senators are agreeing to do something about gun violence.

Yes. Yesterday, a group of 20 senators — 10 Democrats and 10 Republicans — said they’d agreed on a framework to reduce the “threat of violence across our country.” As a reminder: that violence includes more than 45,000 gun deaths in 2020. And mass shootings in Buffalo, Laguna Woods, and Uvalde, among more than 250 others this year.

What did lawmakers agree on?

Gun restrictions: First up, red flag laws. Senators agreed to give states money if they allow courts to temporarily remove guns from people seen as dangerous. They also agreed to address the “boyfriend loophole.” That refers to unmarried domestic violence offenders…who are still able to keep their guns. Senators are also working to strengthen background checks for people under 21 buying guns. Oh, and they may crack down on some unlicensed gun dealers.

Mental health and school safety: Senators would invest billions of dollars on expanding health care in the US, among other programs. They’ll also invest in safety measures and training in schools, plus other “school violence prevention efforts.”

President Biden said that if it passes in Congress, yesterday’s bipartisan approach would be “the most significant gun safety legislation” in decades. Gun safety orgs including March for Our Lives endorsed the deal. The NRA did not, rejecting any effort to infringe on Americans’ “fundamental right to protect themselves and their loved ones.”

This framework still has to be translated into legislation, which then has to be passed. But yesterday’s announcement meant lawmakers are witnessing the bloodshed across the US. And some may be prepared to take action.

Who was stopped in their tracks…

Patriot Front. On Saturday, 31 members of a white nationalist group were arrested near a Pride event in Idaho. After receiving a tip, police found the men in a U-Haul truck with riot gear (think: a smoke grenade, shin guards, and shields) and paperwork detailing plans to riot. The arrests come as state legislatures across the country have reportedly intro’d more than 300 anti-LGBTQ+ bills this year alone. The men — charged with conspiracy to riot — are expected to appear in court today.

The Brookings Institution president. Yesterday, Retired Gen. John Allen resigned from the think tank after being placed on administrative leave. It comes after reports that Allen is under a federal investigation for secretly lobbying on behalf of the nation of Qatar — and advising Qatar’s leaders on how to influence US policy. Allen is a retired four-star Marine general, who once led forces in Afghanistan. He’s denying any wrongdoing, and has not been charged with a crime so far. In a letter, Allen said he was leaving Brookings with a “heavy heart.” While the think tank said it will continue to maintain “high ethical standards.”

Gas prices. Which hit an unprecedented national average of over $5 per gallon yesterday. The news comes amid a summer travel boom, ongoing Russian sanctions for the violence in Ukraine, and refinery shutdowns in the US. And after data from last week showed that inflation has reached its highest level in 40 years. President Biden is considering a visit to Saudi Arabia this summer to try to persuade the kingdom to produce more oil and help bring down costs. That could be an uphill battle for the president, considering he promised on the campaign trail to turn Saudi Arabia into a “pariah state” for its human rights abuses, including the death of Jamal Khashoggi. Biden said a trip to the kingdom would be a “larger meeting” about regional security.

...Oh and speaking of Saudi Arabia, a Saudi-funded golf event just wrapped up in London. Fore.

PS: Gas prices can hurt your wallet. We've got tips to help.

Jennifer Hudson. Yesterday, at the 75th annual Tony Awards, the artist achieved EGOT status. As a co-producer for “A Strange Loop,” which won Best Musical.

Who people are wishing a speedy recovery to…