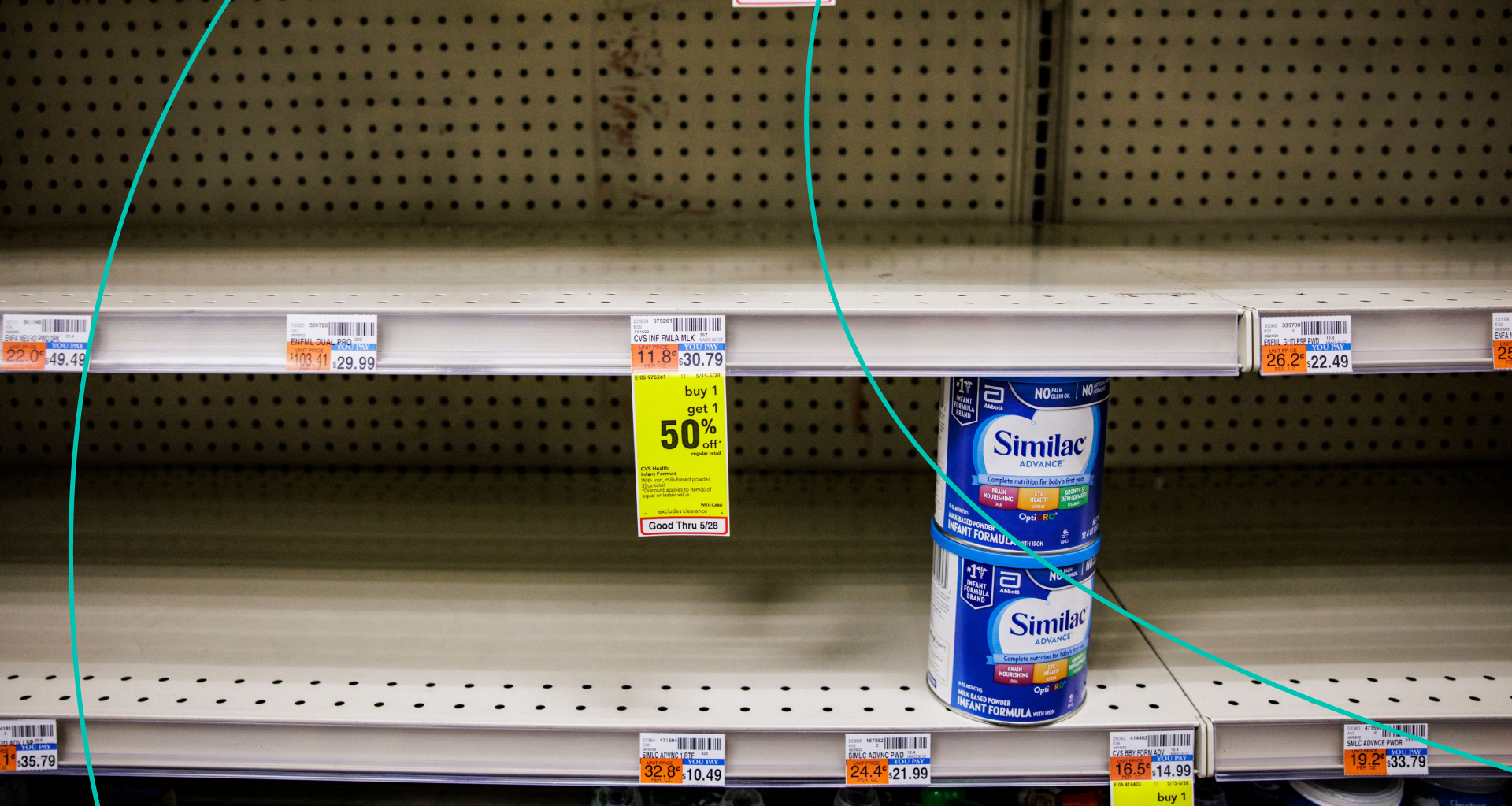 Not good at all. Baby formula has been running low on shelves for months now. In February, the Abbott Nutrition plant in Sturgis, MI, was forced to close its doors after contamination concerns. Mix that in with supply chain issues and parents have been scrambling to feed their babies. Things were looking up when the factory announced it was opening its doors earlier this month. Now, they seem to be taking a step in the wrong direction.

Earlier this week, parts of the plant were flooded after a severe thunderstorm. Abbott is hitting pause on the production of its EleCare specialty formula at its Sturgis plant to assess the damage and re-sanitize. Reminder: Abbott has been prioritizing producing specialty formula for babies with food allergies and digestive problems. Now, Abbott estimates the floods will delay production and distribution by a few weeks. It comes as data reportedly found that about 25% of infant formula products were out of stock last week.

When will the shelves be stocked?

The FDA has previously warned that formula will still be hard to find until at least late July. The company says it’s still on track to produce 8.7 million pounds of infant formula this month. Meanwhile, President Biden has invoked the Defense Production Act to require that suppliers prioritize formula ingredients and has called on other countries for backup.

Between the flooding, supply chain issues, and contamination reports, parents who rely on formula to feed their infants can’t seem to catch a break. In the meantime, many are in search of answers.

PS: We spoke to moms and moms-to-be about how the baby formula shortage is impacting their families. Here's what they said.

Who the Jan 6 committee is talking about...

Former VP Mike Pence. Yesterday, the House committee investigating Jan 6 looked into Pence’s role during the insurrection. Specifically, then-President Trump’s attempt to pressure Pence to refuse to certify the 2020 election results. In videotaped testimony, Pence’s chief of staff said the VP told Trump “many times” that he doesn’t have the authority to reject the votes. Trump later tweeted that Pence didn’t have the “courage” to do what needed to be done, while the violent mob was at the Capitol — and eventually within 40 feet of the vice president.

Ginni Thomas. The Jan 6 committee panel also said it wants to hear from the conservative activist and wife of Supreme Court Justice Clarence Thomas. Ginni reportedly worked to overturn the results of the 2020 election, including by communicating with Trump associates and pressuring Arizona state officials to reject Biden’s win in the state. She said she “can’t wait” to talk to the committee to “clear up misconceptions.” Her husband has so far resisted calls to recuse himself from Trump-related cases.

Who’s got Ukraine’s back...

France, Germany, Italy, and Romania. Yesterday, during a visit to Kyiv, the leaders said they’d back Ukraine’s candidacy to join the EU. It comes as the European Commission is set to decide on whether to recommend Ukraine as an EU candidate as soon as today. But even if all of the EU member states give Ukraine the thumbs up, the process could take years. Meanwhile, Russian troops are advancing in eastern Ukraine as they continue to target Sievierodonetsk. The eastern city — located in the Donbas region — has been a central focus of Russia's recent military efforts. And as Russian troops close in, hundreds of civilians are sheltering in the city's Azot chemical plant.

What needs to make up for its losses…

Revlon. Yesterday, the cosmetics giant announced it filed for Chapter 11 bankruptcy protection. Revlon is struggling with debt, supply chain issues, and inflation. Mix that in with growing competition from celeb-backed brands like Kylie Cosmetics and Fenty Beauty — something micellar water can’t wipe away. But the company plans to stay in business. But the company plans to stay in business, with the CEO saying the filing will provide a “clearer path” for future growth. And that the $575 million they expect to receive will give them the funds to keep day-to-day operations going. Next steps: Revlon’s waiting for the court to sign off.

PS: If you're looking for "clean beauty" products, here are some shopping tips.

What eyes are on…

The stock market. Today could mark the worst week since March 2020. We’re looking at you, bear market.

PS: We Skimm'd what a bear market is, and what your next move should be.

While “Lightyear” is generating a lot of buzz…

The Golden State Warriors made history.

While Drake is saying "Honestly, Nevermind"...

We can’t say the same about Beyoncé’s “Renaissance.”

What people are celebrating this weekend…