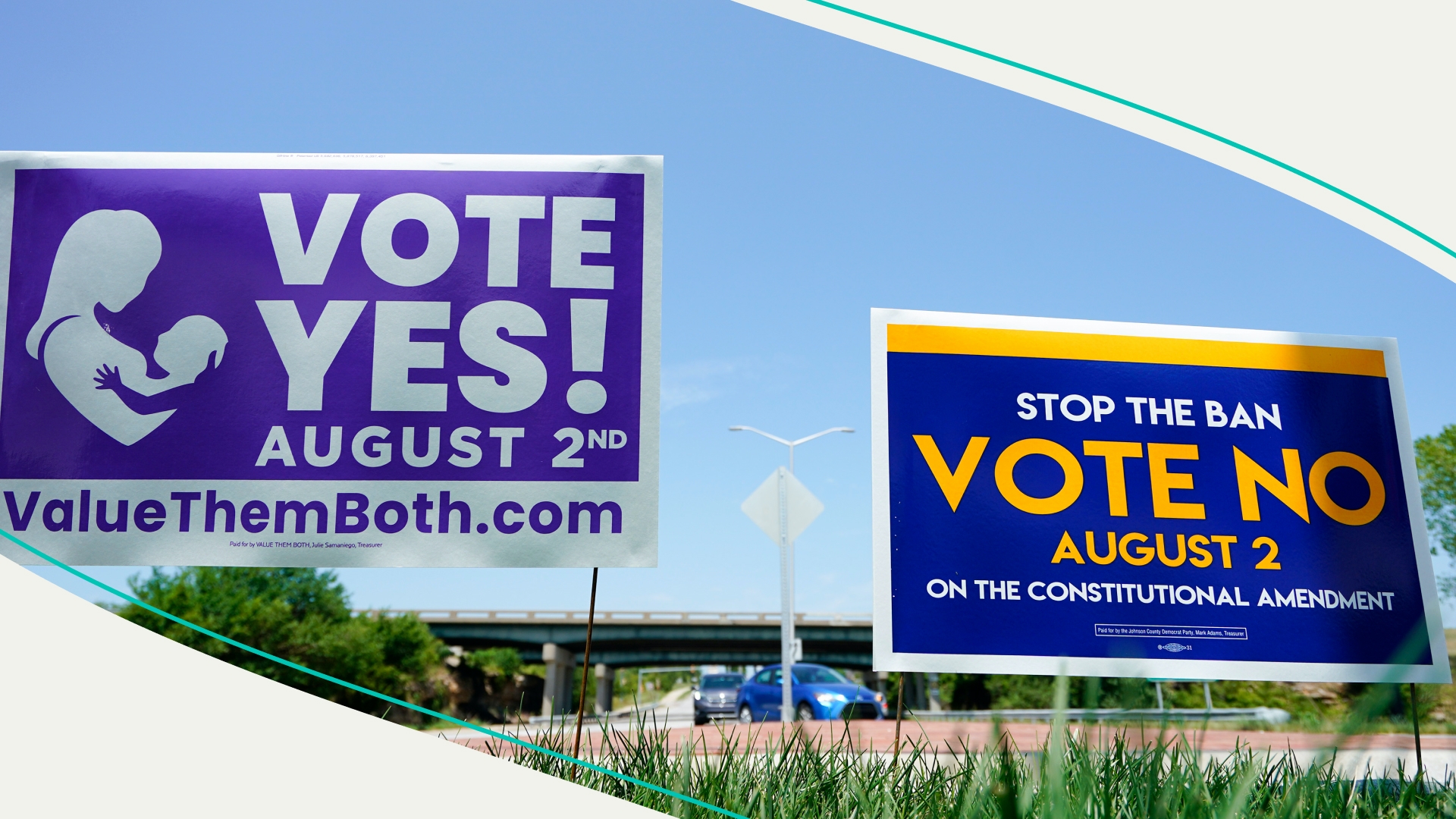 Yesterday, an estimated 500,000 Kansans weighed in on a key ballot measure: Should they keep the 2019 state constitutional amendment protecting abortion rights? Or scrap it? With most of the votes tallied, the results sent a clear message: Nearly 60% voters wanted to preserve those abortion protections, while about 40% wanted to remove them. The decision means abortion will remain legal in Kansas for up to 22 weeks of pregnancy. And Kansas can continue to be a refuge for those in nearby states (like Missouri, Arkansas, Oklahoma, and Texas) with tighter restrictions. But the ramifications of Tuesday's vote go beyond that.

Kansas was the first state to vote on an abortion measure since the Supreme Court overturned Roe v. Wade. And it won’t be the last: In November, Kentucky and Montana will also have anti-abortion referendums on the ballot. Meanwhile, voters in California and Vermont will decide whether their state constitutions should be amended to protect abortion rights. And Michigan is working to get a similar measure on the ballot. With all that on the horizon, Democrats are celebrating the huge turnout in Kansas (almost twice as many voters as in 2018) and the overwhelming support — especially in a traditionally conservative state. And they’re warning anti-abortion legislators: expect more of this in November.

Kansas’s vote to protect abortion rights doesn’t come in a vacuum. Yesterday, the Justice Department sued Idaho over its near-total abortion ban, which is set to go into effect later this month. The message: The Biden admin — and the majority of Americans — want to protect abortion access.

House Speaker Nancy Pelosi (D-CA). Yesterday, the third-highest-ranking US official landed in Taipei. It’s the first time in a quarter century that a US House speaker has visited the island. And comes despite warnings from China and the Biden admin that the move pushes US-China relations to a new low. Case in point: Following her arrival, China announced it would conduct a fresh set of military exercises near Taiwan. And insisted the visit would have a “severe impact” on US-China ties. Still, the House speaker moved forward with her schedule, which included meetings with President Tsai Ing-wen and members of the Taiwanese Parliament. As she wrote in an op-ed, America must “remember that vow” to stand by Taiwan.

What’s made its way through Congress…

This bill. Yesterday, the Senate largely passed a bill that expands health care and disability benefits for 3.5 million veterans. Specifically, these are veterans fighting illnesses that they believe are linked to toxic burn pit exposure (including after the 9/11 attacks). The largely bipartisan vote came nearly a week after several Republican senators blocked the bill from moving forward over concerns about how to pay it. In response, activists — including comedian Jon Stewart — spent days on Capitol Hill voicing their outrage. Now, the bill heads to President Biden, who has called it a “lifeline” for veterans. If signed into law, it’ll be the biggest expansion of veterans’ benefits in over three decades.

Why the Biden admin is calling for backup...

Monkeypox. Yesterday, President Biden named two people to lead the monkeypox response. The White House monkeypox coordinator will be Robert Fenton, a longtime emergency response official at the Federal Emergency Management Agency. His deputy will be Dr. Demetre Daskalakis — a doctor, gay activist, and the head of HIV prevention at the CDC. The news comes as the admin has been facing backlash over everything from vaccine access to messaging. But yesterday’s news was welcomed by gay rights groups, as the community has been disproportionately impacted by the virus, including from stigma. The two leads will be responsible not only for combating the outbreak, but also ensuring equitable availability of tests, vaccinations, and treatments.

...Oh and the news couldn‘t come fast enough for some. This week, California and Illinois joined New York in announcing public health emergencies to combat the virus.

Who’s getting a flag on the play…

The Miami Dolphins. Yesterday, the NFL stripped the team of its 2023 first-round draft pick and suspended and fined owner Stephen Ross. The penalties follow a six-month investigation into tampering and game-tanking allegations made by former coach Brian Flores. The league found no evidence that the team attempted to deliberately lose games. But it did conclude that the Dolphins violated the NFL’s anti-tampering policy by contacting QB Tom Brady and the agent of then-New Orleans Saints coach Sean Payton from 2019 to 2022. Red card.

While celebrities still have CO2 emissions to answer for...

While we help you make sense of the stars…

Editor's note: The top story was updated due to a duplicate sentence.