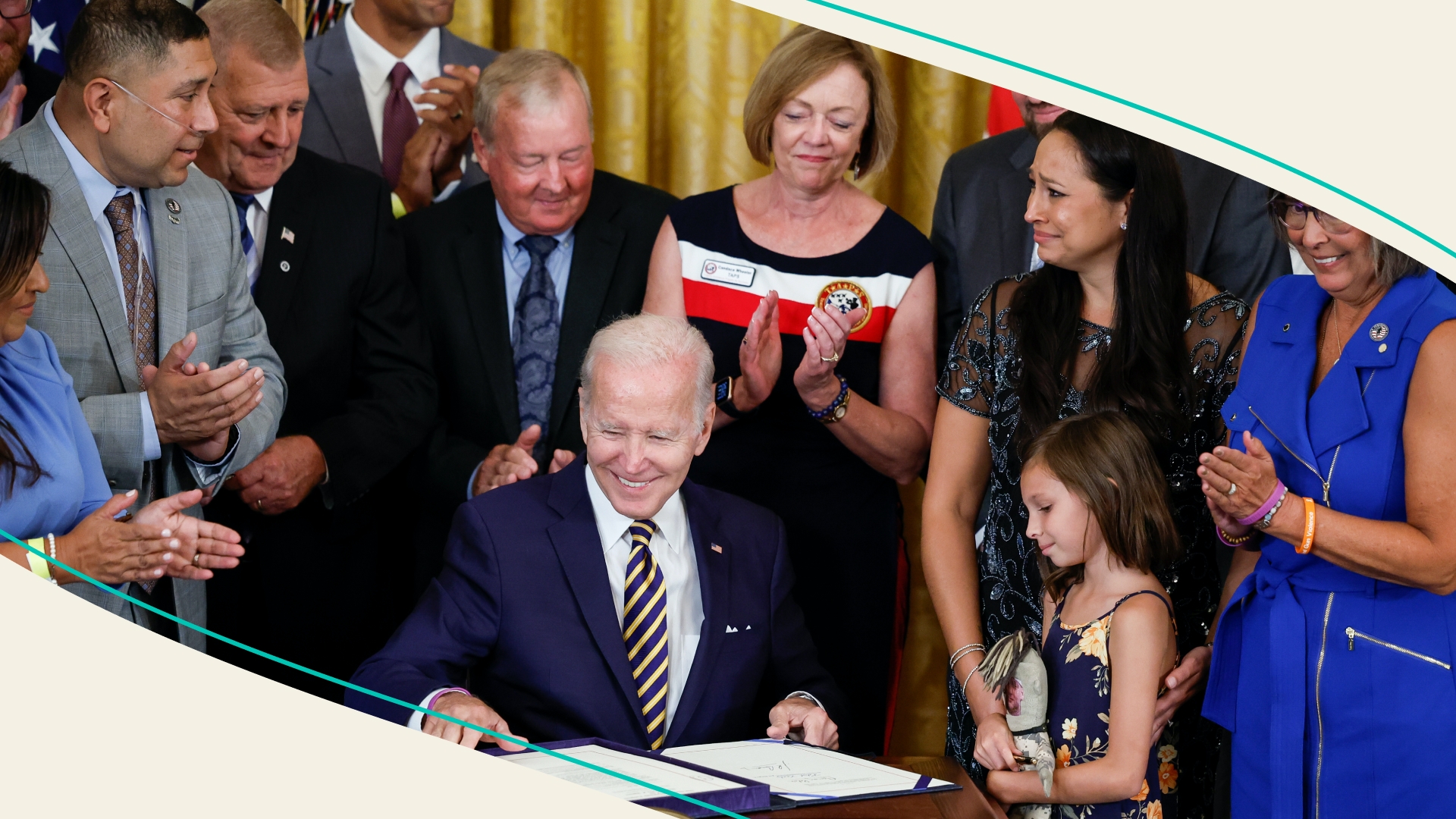 A new law will protect veterans exposed to burn pits.

They're located on US military bases where trash is dumped and burned. The burn pits emit toxins into the air. And some are located near where soldiers sleep and eat. They’re pretty common — especially in places where trash infrastructure is limited (think: during the Iraq and Afghanistan wars). But yesterday, President Biden signed the PACT Act — a $400 billion, bipartisan law to expand health care coverage to those veterans.

Yes — but to access health care benefits, veterans sometimes need to prove their symptoms (think: coughing, throat irritation, rashes) result from military service. Some symptoms from burn pit exposure can be immediate. But others are long-term...and can be tough to trace. Now, this legislation is intended to help veterans who need health care coverage for certain respiratory illnesses and multiple forms of cancer. That includes brain cancer, which Biden’s son Beau died of in 2015, years after deploying to Iraq. In signing the legislation, Biden said he wanted to pass the law “come hell or high water.”

The PACT Act is the largest expansion of health benefits for veterans exposed to toxins in decades. As many as 3.5 million veterans may have been exposed to burn pits. Now, the burden will be lowered for them to access care.

Former President Trump. Yesterday, Trump invoked his Fifth Amendment rights (aka pleaded or took the Fifth). And refused to answer questions from New York Attorney General Letitia James (D) at a scheduled deposition. To be clear, this is separate from the unprecedented Mar-a-Lago raid earlier this week. This case is about a multi-year investigation into whether the Trump Org misled lenders and tax authorities by increasing the value of certain assets like golf courses and hotels...you know, the usual. Trump had criticized people who pleaded the Fifth before, including when aides of then-candidate Hillary Clinton refused to testify about her private email server. Now, he says the “Witch Hunt” left him “absolutely no choice” but to take the Fifth.

PS: What does it actually mean to 'plead the Fifth'? Here's your explainer.

Inflation...maybe. Yesterday, the Labor Department found that the average prices of things like food, clothes, and housing went up last month. But it didn't go up as much as it did the month before. This was not “0% inflation” as President Biden stated. Prices were still up 8.5%, with groceries jumping at the highest rate since the ‘70s. The reason for the slowdown? A slump in energy prices and gas — with the average dipping below $4 for the first time since March. But we’re not out of the woods yet: inflation could still keep ramping up. Still, Wall Street’s taking the news as a clear W. Yesterday, stocks closed at a three-month high with the Dow jumping more than 500 points. Score.

...Oh and some other good news: Americans who receive Social Security benefits could get a $159 per month bump around October. Because, inflation.

PS: Keep your bank account safe while you wait for prices to (hopefully) keep coming down.

The Justice Dept. Yesterday, the DOJ charged a member of Iran’s Islamic Revolutionary Guard Corps with plotting to kill former National Security Advisor John Bolton. The Dept said a member of the terrorist organization had attempted to pay $300,000 for people to carry out Bolton's assassination. And that those plans began late last year. Former Secretary of State Mike Pompeo was also targeted. The DOJ said the planned killings were “likely in retaliation” to the US killing of Iranian commander Qasem Soleimani — the Iranian commander who worked with Iraqi Shiite militias and had been accused of planning attacks on US officials. While the White House reportedly says the revelations won’t be derailing plans for the US to rejoin the Iran nuclear deal, Bolton says Iran's nuclear weapons and terrorist activities are "two sides of the same coin" and that re-entering would be an "unparalleled self-inflicted wound."

Who's the favorite child...

One of the galaxy’s youngest planets.

What’s getting a little too creative…