Brexit History: Why the UK voted to leave 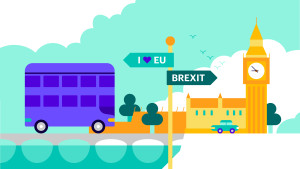 In June, the UK decided to say ‘cheerio, Felicia’ and exit the EU. Where did the Brexit history start?

The EU is a squad of 28 members including the UK (aka England, Wales, Scotland, and Northern Ireland) that's meant to help facilitate things like international trade and negotiation. Because mo countries, mo power. But the UK already acts like a single lady in some ways. While the EU uses the euro, the UK uses its own currency (the pound). That’s because the UK likes to control things like interest rates on its own. Some UK citizens feel the EU had too many rules in general, and it’s better to fly solo. So the gov put it up to a vote. And the verdict was ‘leave.’

The ‘let’s stay together’ team says... There is no ‘I’ in ‘UK.’ Some Brits -- including PM David Cameron and JK Rowling -- think that being part of the EU is a big plus. Why? EU membership gives members the upper hand in trade negotiations. 40% of British exports went to other EU member countries. And a lot of banks heart the UK because of its status as an EU powerhouse.

The ‘go your own way’ team says... There is an ‘i’ in ‘Britain.’ Some Brits -- including former London Mayor Boris Johnson -- think that leaving the EU will give the UK a lot more freedom to do what it wants. The UK paid billions of pounds a year to the EU budget. And as part of the EU, the UK pretty much had to roll out the welcome mat to anyone who lives in another EU country. It also had to help out the EU with its epic migrant and refugee crisis.

What did the rest of the EU say?

Before the vote, most of them were saying baby please don’t gooooo. The UK’s membership card was important to the EU, because it had a bloody great economy and international status. Plus, the EU warned that a Brexit would be bad for big businesses and bring uncertainty to global markets.

So what happened after the vote?

Chaos. David Cameron, the Prime Minister at the time, resigned. Theresa May took his seat. The pound dropped it like it was hot, hitting its lowest level since 1985.

And what happens now?

The EU is so ready to move on by negotiating the divorce details asap. Earlier this year, May triggered a thing called Article 50 to kickstart those negotiations. So now the two sides have two years to figure out what to do about minor things like trade and immigration post-Brexit. Let the games begin.

The UK is one of the most important members in the EU and by throwing in zee towel, it has many people wondering what its future will look like.