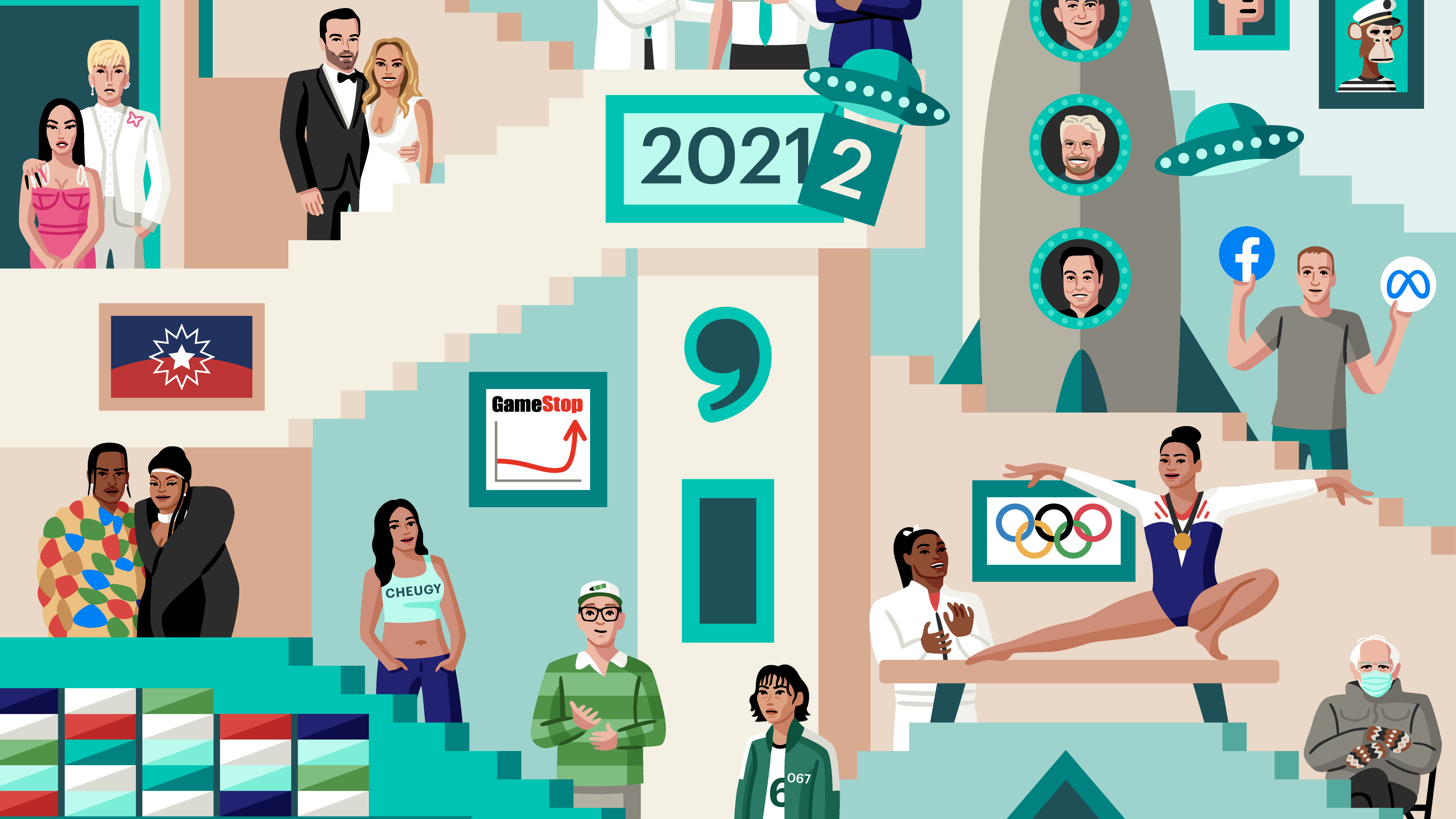 2021, what’s up baby? We vaxxed and waxed but Omicron had other plans. Everything is expensive. Britney is #Free. There was GameStonk. And “Squid Games.” There once was a ship that put to sea. The name of the ship was the one that got stuck in the Suez Canal. Olivia Rodrigo got her drivers license. Olympians got their gold. Simone Biles has our hearts. Kourtney Kardashian and Travis Barker have each other. Lil Nas X had us calling him Montero. Bernie has his mittens. Middle parts and Bennifer are back. Gen Z caught a vibe. The internet caught “Couch Guy.” We met Meta. And Met Gala’d. NFTs are a BFD. This lawyer was not a cat. UFOs may be looking to Earth. Billionaires are looking to space. Jack Dorsey gave notice. So did millions of Americans. Adele didn’t go easy on us. Taylor Swift didn’t go easy on Jake Gyllenhaal. Chrissy Teigen, Chris Harrison, and Dave Chappelle had a lot to answer for. So did the Cuomo brothers, Mr. Big, and the royal family. But there were uplifting moments: We had our very first Madam Veep — a hill we needed to climb. The US recognized Juneteenth. And “Blue’s Clues” made a (much-needed) comeback. What a no bones day this year has been. Let’s get to it.

COVID-19...We’re still in a pandemic. Over 205 million people in the US got fully vaxxed (thank you, science). But about 30% of the eligible US population may be playing the waiting game. Meanwhile, variants like Delta and Omicron kept throwing travel plans into question. The FDA authorized COVID-19 antiviral pills. The J&J vaccine is raising red flags over blood clots. And the CDC put the 'C' in confusion over its booster guidelines and quarantine lengths. We still don't have any As to big Qs about the virus’s origins and long COVID. And the little questions are just as puzzling, like are we back to double masking? And is AstraZeneca’s PR team okay?

The economy…Inflation is the highest since the ’80s. Home prices are through the roof. And with stocks all over the place, investors tried their luck with crypto, meme stocks, and NFTs. Unemployment claims dropped. And everyone is struggling with a labor shortage. Meanwhile, the new normal is the new normal. Companies hit ‘delay’ on return to office plans. Biden implemented a vaccine and testing mandate for businesses — to mixed reviews. And more than 4 million Americans said ‘see you’ as part of the Great Resignation. World leaders endorsed a global minimum corporate tax rate. OnlyFans stressed out their Only Fans. Bumble, Roblox, and Duolingo IPO’d. And a Starbucks store in Buffalo, NY, formed the company’s first labor union. And that’s a frap.

Attack on democracy…On Jan 6, Congress got together to certify then-President-elect Biden’s electoral win. But pro-Trump supporters who refused to accept the 2020 election results stormed the Capitol. They scaled walls, broke into offices, and attacked officers to try to stop lawmakers from doing their job. It was the first major attack on the Capitol since 1814. Five people died. House Democrats voted to impeach then-President Trump for a second time — a first in US history. And many Republicans told Trump 'we have your back.' As for Trump, he still can’t let go of his 2020 loss. And might be eyeing a redo in 2024.

#46...After the early January chaos, President Biden was still sworn in 14 days later. And brought in the most diverse Cabinet in US history. His No. 2, VP Kamala Harris, made history as the first woman, first Black person, and first South Asian American as VP. Biden reversed Trump’s bans on transgender people serving in the military and travelers from majority-Muslim countries. And rejoined the Paris climate deal. His infrastructure bill passed — a historic bipartisan effort. Sen. Joe Manchin (D-WV) threw a wrench into Dems’ plans for a $2 trillion social spending package. Meanwhile, Biden’s in the hot seat for how he’s handled immigration: Border crossings reached a 20-year high. Thousands of migrants were kept in close quarters amid a pandemic. And the admin re-implemented “Remain in Mexico.” Images of Border Patrol agents chasing Haitian migrants on horseback left a stain on the president’s first year. And Trump's base has a new chant.

Congress…Democrats and Republicans are as divided as ever. After a W in Georgia, Dems have control of Congress...by thiiiiis much. It’s helped them pass Biden’s $1.9 trillion coronavirus relief package. And a $1 trillion bill to give the nation’s infrastructure a boost. It’s been the year of the filibuster, which quashed voting rights legislation three times. Some GOP lawmakers — Reps. Paul Gosar, Lauren Boebert, and Marjorie Taylor Greene — made headlines for all the wrong reasons. Next year, the 2020 census is giving the lower chamber an Extreme House Makeover — starring 13 states. That includes CA and NY, which are losing seats. And TX and FL, which are saying 'hi' to new lawmakers. Pressure's on for the midterms. So make sure you're registered.

Racial justice...A jury handed ex-officer Derek Chauvin one of the longest prison sentences for a police killing of a Black person. A Wisconsin jury acquitted Kyle Rittenhouse after he killed two and injured a third during a BLM protest in Kenosha, WI, last year. Ahmaud Arbery’s family got justice. And former police officer Kim Potter was convicted in Daunte Wright's death. We lost Daunte Wright, Ma'Khia Bryant, Andrew Brown Jr, Isaiah Brown, Adam Toledo, and many more. And a report found what many already knew — that police killings of Black Americans could amount to crimes against humanity. It had Americans calling for change yet again. Virginia got rid of over a dozen Confederate statues and monuments. Evanston, IL, became the first US city to approve reparations for Black residents. The state also threw out cash bail. Speaking of states…

Things that happened on the state level...Texas enacted one of the country’s strictest abortion bans. It came as SCOTUS considers Mississippi's heartbeat bill — a case that threatens to overturn Roe v Wade. Georgia, Florida, Texas, and Arizona implemented voting restrictions. Virginia voted in its first Republican governor since 2009. New Jersey re-elected its first Democratic one in years. California didn't recall Gov. Gavin Newsom (D). Now, many states are going their own way on mask and vax mandates. Some are pushing back on critical race theory in schools. And more than two dozen states pushed anti-trans laws.

Tragedies in the US…This year we mourned 98 people who were killed when a 12-story condominium partially collapsed in Surfside, FL. And the 10 people who died at Travis Scott’s sold-out Astroworld music festival in Houston, TX. Kentucky is still reeling from tornadoes that swept across the Midwest and South — responsible for the deaths of at least 88 people. In New Mexico, Alec Baldwin fired a prop gun while on set for “Rust,” accidentally killing 42-year-old cinematographer Halyna Hutchins. And deadly mass shootings devastated communities in Georgia, Colorado, Indiana, and Michigan.

Afghanistan...The US ended its longest war after nearly 20 years. More than 2,400 US troops and more than 47,000 Afghan civilians were killed. The US spent an estimated more than $2 trillion. But the chaotic exit left many asking ‘what happened?’ The Taliban regained control of Kabul and Afghanistan. ISIS carried out a series of attacks. The Taliban promised to respect women...but set limitations for schooling and work. Now, tens of thousands of Afghans have resettled in the US. But international sanctions against the Taliban are pushing the country's health system and economy to the brink of collapse.

Israeli-Palestinian conflict...A land dispute sparked the worst violence since 2014. Hamas — a Palestinian militant group — fired more than 4,300 rockets into Israel. Israeli forces responded with attacks on more than 1,500 targets. All together, the conflict left more than 200 people dead in Gaza and 13 people in Israel. Protests erupted around the world in support of Palestinian rights. The UK and US saw a steep rise in anti-Semitic attacks. And the world still has no plan to bring peace to the region.

Things that had women speaking out...Tens of thousands spoke out against sexual violence in Australia. Venezuelans protested femicide. Turkey withdrew from an int'l treaty protecting women. US women marched for abortion rights. Sarah Everard and Sabina Nessa started a conversation about violence against women in the UK. Gabby Petito’s death sparked a media frenzy. Many pointed to the lack of attention on Brown and Black women who go missing. And why it takes so long for them to be heard (see: R Kelly). Ghislaine Maxwell was found guilty of sex trafficking. Noor Mukadam and Agnes Tirop’s killings sparked outcry on social media. And the ‘shadow pandemic’ continues to make it difficult for women to escape their abusers. But a TikTok hand signal helped one missing girl make her way home.

Things that happened on Earth…Despite a drop in global greenhouse gas emissions in 2020, they’re back up to record levels. And the Earth is hurting. Case in point: droughts in the Western US. And record heat waves. A winter storm knocked out Texas's power grid. The Dixie and Caldor Fires ravaged California. There was an oil spill off the state’s coast. Hurricane Ida left 82 dead and flooded towns across America. While Hurricane Henri left billions in damage across the Northeast. And 99.9% of scientists agree people need to come to terms with reality.

Things that happened in space…Humans ‘touched’ the Sun. NASA exhibited Perseverance and Ingenuity on Mars. SpaceX made history with the first all-civilian trip to space. NASA helped launch the world’s largest and most powerful space telescope. And Richard Branson, Elon Musk, and Jeff Bezos all competed to be head space cowboy.

Things that kept ESPN in business…Seven-time Super Bowl champ Tom Brady had people going Bucc-wild. The Tokyo Olympics had a successful rain check. But not everyone is as excited about the Beijing Olympics. Abuse survivors reached a historic settlement with USA Gymnastics and the US Olympic & Paralympic Committee. The world’s worried about the well-being of Chinese tennis star Peng Shuai. Meanwhile, the NBA, NHL, NFL called ‘time out’ because of Omicron.

How we all felt this year...burnt out.

The energy we're bringing into next year...it's giving, it's giving happiness.