How to Make Your Routine More Green 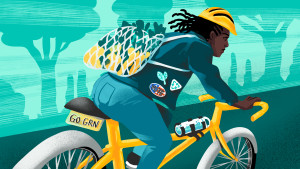 You said it.
The globe is warming. Although COVID-19 lockdowns slowed down CO2 emissions for a bit, the World Meteorological Organization says 2016-2020 is set to be the warmest five-year period on record. You may have noticed that cherry blossoms are blooming super early and global sea surface temperatures are on the rise. Not things to celebrate. We humans and our behaviors are to thank. Our daily lives run on fossil fuels (think: driving, using electricity...for everything), which are what emit greenhouse gasses. They trap too much heat in the Earth’s atmosphere, and over time, that’s accelerated climate change. All of this causes natural disasters like severe storms, droughts, heat waves, record flooding, bleached coral reefs, and melted glaciers. It’s science. Do nothing, and huge parts of the planet could become hotter and uninhabitable. If not for yourself, think of the polar bears and sea turtles.

How did we get here?
The phrase “global warming” dates back to the ‘70s. But it’s been more than 100 years since scientists had the idea that burning fossil fuels could lead to a warmer climate. Quick reminder: weather and climate are different. Think of weather as what you see outside on a given day — the thing that influences your daily outfit choice. Whereas climate’s the long-term averages in daily weather in a particular place. Climate change is something the Biden admin is taking seriously with a $2 trillion infrastructure and climate plan. It proposes boosting the number of electric cars on the road with tax incentives and by building 500,000 charging stations. And calls for a 100% national transition to carbon-free electricity by 2035.

How can I help?
Glad you asked. Here are some ways to reduce your carbon footprint. And that’s what will slow global warming's roll…

theSkimm
Depending on your budget, resources, and time, some efforts to fight climate change can be easier than others. But each step you take toward green choices, means a small step towards a greener world.