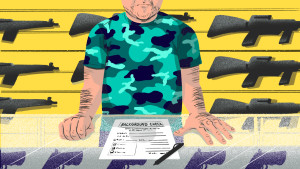 After the recent mass shooting in New Zealand, the government quickly promised gun control. It’s left many wondering why politicians in the US are consistently more hesitant to enact gun control legislation.

Laws are more strict than in the US. While many Americans can buy a gun in less than an hour after a background check, that process can apparently take weeks or months in New Zealand – and includes a home visit from officials to make sure a weapon would be properly stored. But unlike some countries, most guns don't need to be registered there. And New Zealand’s gun lobby is believed to be pretty powerful. So passing gun reform could be challenging.

But lawmakers are going to try?

Yes. The PM says she'll introduce legislation next month to ban military-style semi-automatic weapons, assault riffles, and high-capacity magazines. There'd also be a buyback program for people who want to give up their guns. The gov’s quick response raised questions about why US lawmakers hesitate to make similar gun policy edits.

Yeah, why is that?

There could be a few explanations, like how the US’s voting system tends to give more power to rural voters – where gun ownership is concentrated. But the US also has the Second Amendment. New Zealand doesn’t. That makes attempts at gun control there a lot less complicated.

What’s the current gun situation in the US?

Gun deaths...are the highest they’ve been in decades. In 2017, almost 40,000 people in the US died by guns. The majority were by suicide. The next major cause of death was homicide. No other wealthy country has comparable rates for gun deaths. For context, out of more than 20 wealthy countries, the US is believed to be responsible for more than 80% of all gun deaths.

Gun access…today, it’s estimated that 20-30% of Americans own a gun – and that more live in a household with a gun. But it’s hard to know for sure because there’s no central database of gun owners. One analysis found that the majority of Americans say they have guns for protection. People also own guns for hunting, sport shooting, or because they collect them. One estimate says that 22% of gun owners didn’t go through a background check. That’s because of...

State laws...vary on everything from whether you can openly carry a gun to whether you can buy assault weapons and high-capacity magazines. Some states require background checks, even if you buy from a private seller.

What role does the NRA play in all of this?

We get into that, the history of gun policy in the US, and more in theSkimm app. If you download the app now, you can text us your questions each week on a different news topic and get an exclusive Skimm FAQ. Psst: the first week is free.