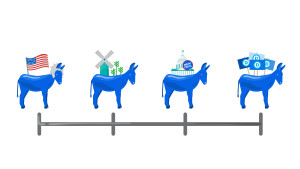 Since the 2016 presidential election season, the Democratic Party has started turning further to the left, to the left. That’s led to an identity crisis in the party, dividing it into the moderate wing and progressive wing. You can thank Sanders for all the ch-ch-changes. The self-declared democratic socialist may not have won the party’s presidential nomination in 2016 (hi, Hillary), but his ability to resonate with voters’ concerns and his grassroots campaign propelled him to do better than anticipated – and pushed the party to become more progressive.

On the 2016 campaign trail, Sanders channeled Americans’ frustration with issues like income inequality, student loan debt, and health care – and rolled out policies to tackle many of those problems. Actually, Sanders and President Trump had pretty similar strategies: they ran populist campaigns focused on average Americans’ concerns...and were successful in doing so.