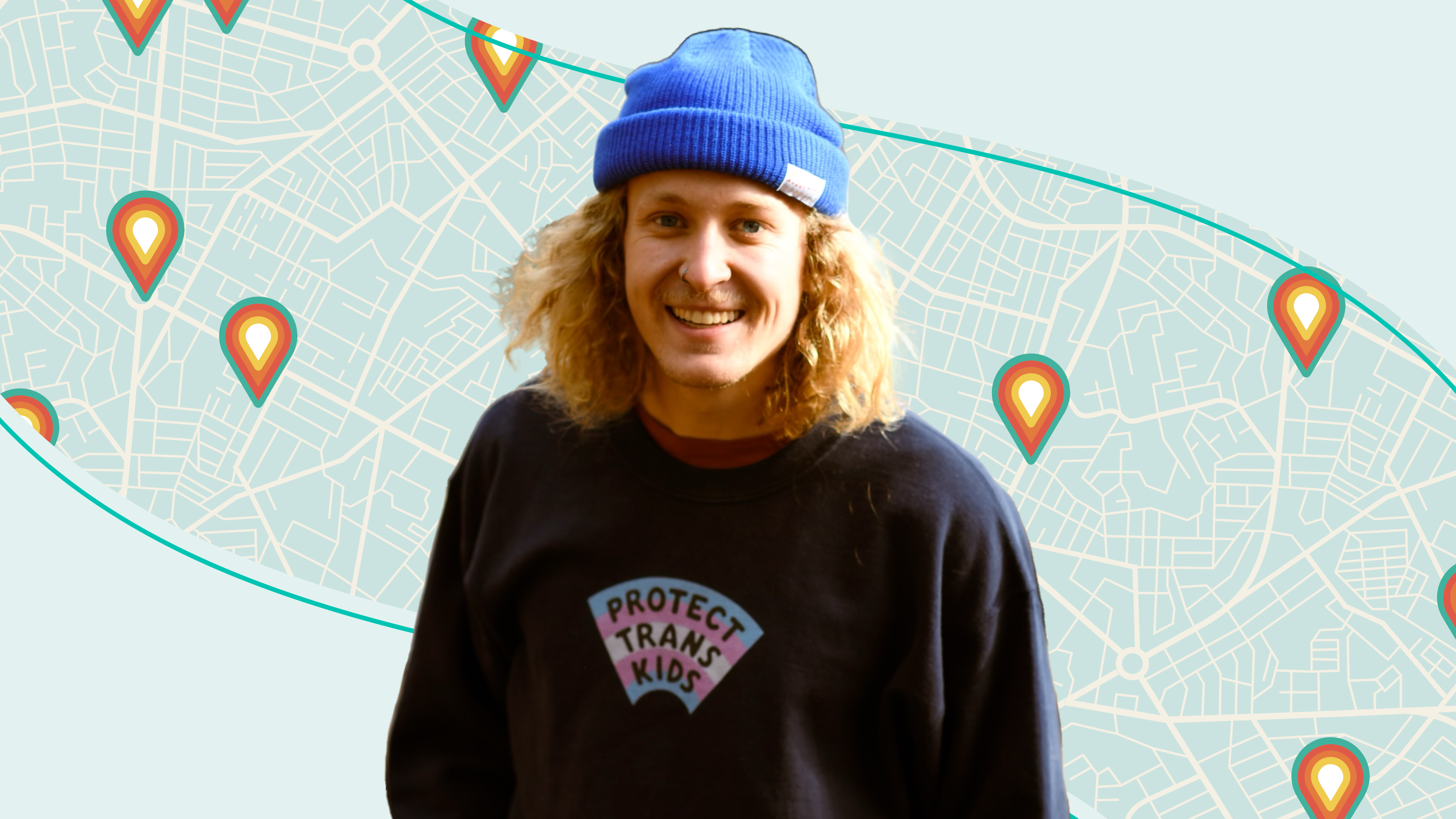 How do you find queer-owned businesses near you? As part of the LGBTQ+ community, Charlie Sprinkman (he/they), wondered the same while traveling across the US. He went to 42 of 50 states and Google searched terms like 'queer hangouts here' or 'queer spots here' — but nothing came up. So he founded Everywhere is Queer.

Now, Sprinkman's solution to that problem has been viewed over 135,000 times. Enter: the worldwide interactive LGBTQ+ biz map Everywhere is Queer. It's the newest travel tool to help you find safer queer spaces during your next trip. And its importance is more relevant now than ever.

How Everywhere is Queer Got Its Start

“I couldn’t really find a resource,” Sprinkman said of his attempts to find LGBTQ+ spaces nationwide. It was a stint as a counselor at Brave Trails summer camp (a queer leadership camp for 12- to 18-year-olds) that sparked the idea. Sprinkman found the camp experience "euphoric" and "amazing." And wanted to re-create that environment for queer youth everywhere.

On his drive back to his then-home of Colorado, the brainstorming began. “I was like, ‘How can I build this?’ Not even just for queer folks, but allies and people who want more safer spaces all over our country,” he said.

And after inspiration hit, Sprinkman was just as intentional with naming his creation. “I asked all my friends, and was like ‘Okay what do we think? Is [the name] too long?’” he said. The word queer, “was used differently a few generations ago, but we’re reclaiming it, and I’m proud to have it be part of my business name.”

In January, the map launched — and garnered quick growth. Sprinkman attributes the attention to early news coverage. And social media posts from supporters. Its Instagram page reached 96,300 accounts in its first 90 days.

How the Map Works

Once you're in the map, you can search around the globe to find various queer-owned businesses. Specific icons correspond to different genres of business. Including a lightbulb for creative orgs, shopping bags for retail, a heart for therapists, and more.

Know of a queer-owned business you think should be on the map? You can submit an application right on the homepage. That’s actually how Sprinkman has compiled businesses from the start. A system that seems to be working for him, given there’s more than 660 businesses on the map now.

Its Impact on the Communities It Aims to Serve

In recent years, the rights and freedoms of LGBTQ+ Americans have been targeted by anti-LGBTQ+ legislation. The Human Rights Campaign (HRC) coined 2021 the “worst year in recent history” for these measures. And 2022 could be worse. So far, 28 states have intro’d anti-LGBTQ+ bills. Eight states have made them a reality, like Florida’s “Don’t Say Gay” law.

Sprinkman said he’s seen an impact on his map. “A lot of businesses in Florida have popped up. And in Texas. All I can hope is that we're going to be able to support these queer-owned businesses in these states that are having these horrible things pass.

“And hopefully with the power of the collective, we can really make change. Even if that means just supporting the local queer-owned businesses and uplifting their voices,” he added.

Sprinkman said he’s gotten over 100 DMs on Instagram from people praising the map. And tons of feedback from restaurants on the map who have seen an increase in queer patrons. Sprinkman’s thrilled by the positive responses. But since day one, he’s had one specific group in mind: queer youth.

“I think about youth a lot in our world, especially after going to Brave Trails,” Sprinkman said. “But as someone who grew up in small town, Wisconsin, I just hope that people can use this platform to —  even if you're in the closet — just sit at a space and see queer people. I hope it’ll allow people to find safer spaces.”

Charlie Sprinkman’s “Everywhere is Queer” map comes at a time when US legislatures are reviewing anti-LGBTQ+ laws. And exclusion is once again rearing its ugly head. But this tool disrupts that. Sprinkman hopes his map can shed light on spaces for inclusivity and connection — in a world that frequently lacks both.