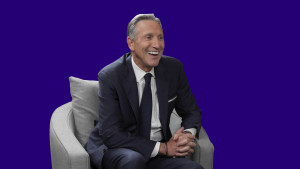 ICYMI, Democrats have been a little upset about the former Starbucks CEO thinking of running for president. We talked Howard Schultz on 2020.

People love lattes. Or at least…we love lattes. But the issue they have is that Schultz says if he were to run, it would be as a “centrist independent.” And many Dems worry this will split the vote in a way that ultimately helps President Trump win re-election.

Hmm got it. Is Schultz caving?

Nope. He says he’s “unfazed” by the haters. And that the country needs someone to help fix the “broken political system.” He pointed fingers at the recent government shutdown as example A.

It means he basically gets to skip over the primary process. Aka when candidates from both parties duke it out for their party nomination.

Is that a good or bad thing?

We asked him directly. Here’s what he had to say…

Apparently. President Trump seems to have opened the doors for non-political candidates to walk through. Schultz has a pretty good rep from his nearly 40 years at Starbucks. He helped grow it from a handful of stores to more than 28,000. But...he’s not the only billionaire looking to get into the race.

Who else we got?

Michael Bloomberg. He’s been eyeing that White House for years now. And has already jumped on Schultz for going about this presidential candidate thing all wrong. Schultz had a little something to say in return.

If he runs as an independent against incumbent President Trump, and Bloomberg runs as a Dem, there would be three candidates for prez in the realm of self-proclaimed billionaires. And they could (potentially) self-fund their campaigns. We asked what kind of message that would send to Americans who want change in the political system...

So is he gonna run as an independent or not?

Stay tuned…Until then, here are the candidates who've made their 2020 run official.