'Huddled Masses Yearning to Breathe Free': The History of Asylum in the US 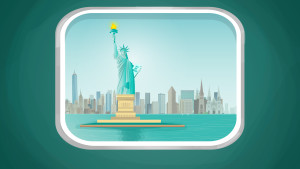 The Trump administration is trying to end asylum protections for most Central American migrants who arrive at the US-Mexico border. The new policy shines a light on decades-worth of US and international policy that could be at risk.

What does it mean that they’re asking for asylum?

Glad you asked. Under US and international laws, anyone who steps foot on US soil can apply for asylum. You might be eligible for protection if you’re facing persecution in your home country because of your race, religion, nationality, political opinion, or membership in a particular social group. Like being LGBTQ in some places, or being part of an ethnic minority in others. Asylum seekers ask for these protections once they land in the US, while refugees ask for protection while they’re still outside the US.

How long have these asylum protections been around?

Only since the end of World War II. Jews were persecuted in Nazi Germany, but a lot of countries -- including the US -- didn’t answer their calls for help. By the end of the war, at least six million Jews had been murdered in the Holocaust. Countries around the world said ‘never again’ and starting putting pen to paper.

What do the laws say?

Let’s say I’m seeking asylum. What do I do?

In some cases, you first have to turn yourself in at the border or the airport and ask for asylum. Then you’ll be taken into custody and you’ll have to go through a ‘credible fear’ interview to make sure your asylum claim is legit. If you pass the interview, you get a court date with an immigration judge, who will issue a final verdict.

Except the immigration courts are really backlogged, so people can wait a long time for their court date. Once they get to court, they aren’t guaranteed asylum status. Judges have some leeway in granting asylum, and most cases aren't clear cut. It can be hard to prove - especially if the persecution isn't part of the government's laws or policies. At the end of the day, only about 15-20 percent of asylum seekers are actually granted asylum.

The US is often referred to as ‘a nation of immigrants.’ But for most of the country’s history, immigration has - for the most part - been about people seeking a better life. In recent decades, U-S immigration policy has included protections for people seeking a better life because they’re fleeing persecution in their home countries. The US and international governing bodies have passed laws to protect asylum seekers along the way.