Are War Crimes Being Committed in Israel and Gaza? 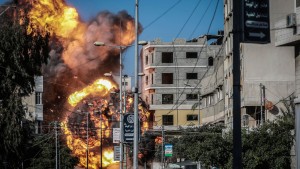 War between Hamas and Israel is nothing new. But after Israelis attempted to remove six Palestinian families from their homes in the Sheikh Jarrah neighborhood in East Jerusalem, tensions have risen again – resulting in the region’s worst violence since the weeks-long war in 2014.

Since then, both sides have continued to exchange near-constant fire. Now, the death toll continues to rise. More than 220 Palestinians, including over 60 children, have died. As well as 12 Israelis, including 2 children. It's shedding light on how civilian deaths play a role in these battles. There are two main reasons for the disproportionate number of casualties:

As the number of civilian casualties rises, questions are being raised about potential war crimes.

Here’s how things are stacking up…

Critics of Israel say the country is using disproportionate force against Hamas. They argue that Israel's military is the most powerful in the region, while Hamas is a militant group that lacks sophisticated weaponry and defense systems. And despite Israel’s claims that it warns Gaza’s civilians of impending strikes, its latest assaults have flattened homes, offices, and high-rise buildings – including one that housed news orgs including the Associated Press and Al-Jazeera. This level of assault could be considered a disproportionate use of force – aka a war crime.

When it comes to Hamas, the group has fired more than 3,000 rockets at Israeli cities and towns. An act that is considered a war crime since international law prohibits the targeting of civilians.

The New York Times says the laws of war are “a collection of international treaties and unwritten laws, also known as international humanitarian law” that governs the behavior of combatants. And it applies to all sides of any conflict. The caveat: there can be no legal judgments on war crimes during the “heat of battle.”

And it can be tough to prove that these violations actually occurred. For example: if a specific attack (like the one Israel levied on the high-rise building housing journalists) is disproportionate, then prosecutors would need to know what exactly was being targeted, what military advantage was gained, and whether it exceeded the harm caused to civilians and civilian property, according to the AP.

Enter: the International Criminal Court (aka ICC). In February, it launched a probe into possible war crimes committed by Israel and Hamas during their 2014 war. And last week, the court warned that both sides may be subject to future prosecution amid the current war.

But there is a wrench in holding governments accountable for crimes like these. Israel (and its top ally the US) does not recognize the ICC. Meaning the court faces an uphill battle in holding Israel accountable for any crimes it could potentially be convicted of. Meanwhile, Hamas (who the court says falls under its jurisdiction) has welcomed the investigation – but it could still be years before any findings are revealed or a probe begins for the latest war.

As Israel and Gaza exchanged fire, civilians paid a heavy price. And now after nearly two weeks of violence, a ceasefire has finally been called. But without timely accountability for the crimes potentially being committed, it’s unclear how long the impacts of this latest bout of violence could last or when they could start again.

PS: For the latest updates on what’s happening in Israel and Gaza, sign up for the Daily Skimm.