Key Takeaways From The Jan. 6 Hearings If You Haven’t Had Time To Watch 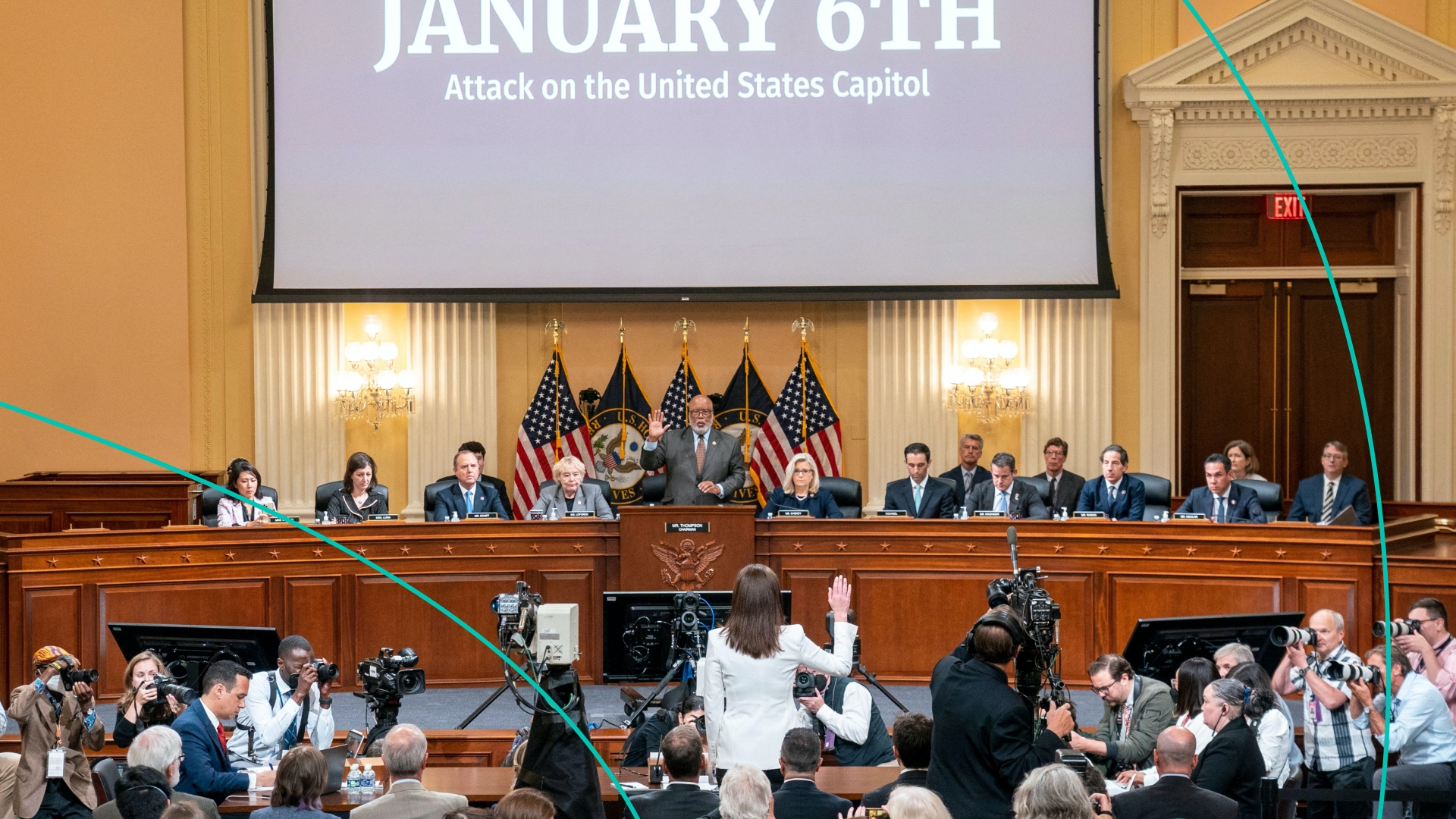 Raise your hand if you haven't been tuning into the Jan. 6 hearings. Don't worry, we got you covered. Here are the highlights you need to know to stay in the loop. Plus, what we know about the next set of hearings in the fall.

But first, a quick refresher on how we got here: On Jan. 6, 2021, a mob of pro-Trump supporters stormed the US Capitol. As Congress was certifying then-President-elect Biden’s election win. Five people died and dozens of officers were injured. Many blamed former President Trump’s false claims of a stolen election for the attack. To this day, Trump has maintained he did nothing wrong.

That’s where a special House select committee comes in. For nearly a year, they've been digging into what happened behind the scenes at the White House on that deadly day. Now, after conducting more than 1,000 interviews, they're bringing their findings to the public. Here's what we’ve learned so far.

The committee kicked things off by outlining their intentions. Including to present the “facts and causes of the events.” And make the case that Trump was ultimately responsible. Rep. Liz Cheney (R-WY) — the vice chair and one of only two Republicans on the committee — said the former president had overseen a months-long “sophisticated seven-part plan” to overturn the 2020 election. With Rep. Bennie Thompson (D-MS), the committee’s chair, calling the events of Jan. 6 “an attempted coup.” Here’s what else happened on the first day:

June 13: Trump’s fraud claims were debunked. But he didn’t care.

The hearing focused on how Trump’s inner circle repeatedly told the president there was no merit to his allegations of fraud. But instead, Trump followed his lawyer Rudy ​​Giuliani’s approach: to promote that the election was stolen (the “Big Lie”). Testimony revealed some other key info, like:

Advisers to the former veep shared that he was under a major pressure campaign to help overturn the election. Trump and his lawyer John Eastman tried to persuade Pence to block Congress’s certification of the 2020 election. Even though it’s illegal. That day, we also found out…

During the fourth hearing, lawmakers focused on how Trump tried to disrupt the peaceful transfer of power on the state level. Including by pressuring Republican state officials to lie. And attempting to implement a plot involving fake electors. Election officials from states — where Biden narrowly won — gave powerful statements against the former president’s admin. Including…

Former acting Deputy Attorney General Richard Donoghue confirmed Trump wanted the DOJ to “just say the election was corrupt.” Even though the department had already announced that there was no evidence of election fraud. Other former officials also spoke about the Trump admin’s inquiries into potentially seizing voting machines. And how Trump and his advisers looked into bizarre conspiracy theories to overturn the election. Here’s what we learned during the fifth hearing:

The House select committee met for a surprise hearing. Cassidy Hutchinson, a former aide to then-WH Chief of Staff Mark Meadows, gave bombshell testimony against Trump. Here’s what she had to say:

During its seventh hearing, the committee focused on how dangerous domestic extremists came together to incite violence. And laid out evidence stating that Trump and his allies mobilized the violent mob to march to the Capitol in the days and weeks leading up to Jan. 6. Here’s what we found out:

July 21: A spotlight on Trump’s actions as the Capitol came under attack

On July 21, the committee — in its second prime-time hearing — accused Trump of a “dereliction of duty." Aka he failed to fulfill his oath as commander in chief by not stopping the attack. Lawmakers focused on what exactly the former president was (or wasn’t) doing while a mob of his supporters broke into the Capitol. Reminder: It took Trump more than three hours to call on the rioters to stop. Here’s what we learned from the eighth hearing:

What’s next in the investigation?

The committee will reconvene for more hearings in September. In the meantime, the panel plans to gather new evidence and testimony throughout August. And to look into allegations that the Secret Service deleted text messages in the days surrounding the Jan. 6 attack. Also coming up in the fall: the committee’s initial report of its findings. With a final report coming later this year.

It’s still unclear whether lawmakers will make criminal referrals against Trump or his aides to the Justice Dept. But in the end, it’s up to the DOJ to pursue those charges. It’s worth noting that no former president has ever been prosecuted by the Justice Dept. Not to mention, an indictment could sow even deeper divisions among Republicans and Democrats ahead of the midterm elections.

The Jan. 6 attack has left a stain on American democracy. Now, lawmakers are working to uncover the facts about what happened on that dark day. But it’s unclear what all of the evidence and hearings will lead to in terms of accountability.

Updated on July 26 with a recap of the eighth hearing.