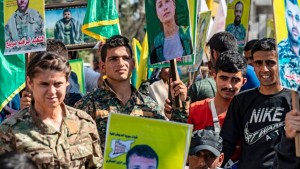 Earlier this year, President Trump pulled US troops from the Syrian border. That led to negative consequences for a key ally in the region: the Kurds. Here’s what to know about who they are and how Trump's decision impacts the Middle East.

The Kurds are one of the largest ethnic groups in the world without an actual state. And they’re involved in some of the biggest conflicts in the world. In this Skimm Notes, you’ll learn…

✷ Who the Kurds are

✷ Their situation in the Mideast

✷ Why they want independence and whether they’ll actually get it

On Skimm This: Democrats and Republicans are speaking out against the surprising pullback of US troops from northern Syria, saying the Kurdish forces that helped defeat the Islamic State could be at risk. We explain the pushback Trump’s big move is facing on Capitol Hill.

Then in the Daily Skimm: