Labor Unions: How workers got their rights 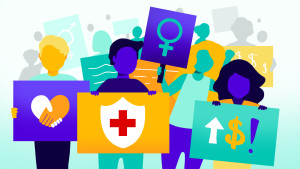 Labor unions have been around for decades, but they’re not getting as much love as they used to.

Some background would be great.

You got it. Labor unions are groups of workers that band together on work-related decisions (think: hours, wages) through collective bargaining. Members pay dues that go towards things like representation, political campaigns, and paying union leaders and staff. Union reps negotiate with employers on their members’ behalf.

Where did this idea come from?

The idea dates back as far as the 1700s, when printers in New York joined forces to ask for a wage increase. But unions didn’t really pick up steam until after the Civil War, when the US started to industrialize. Enter: the Industrial Revolution.

Right? The uptick in mass production meant more jobs. Plus an influx of immigrants coming to the US meant more people willing to take on those jobs. These circumstances created a power gap between employees and their bosses, who could get away with paying workers low wages and forcing them to work long hours. So workers started to fight back through labor organizations. In 1935, President Roosevelt signed the National Labor Relations Act (aka the Wagner Act), establishing the right to join a union, go on strike, and collectively bargain (though it’s still illegal for federal workers to strike).

And, let me guess, the rest is history?

Sorta. Union membership hit its peak by 1954, when about one in three Americans were part of one. Though union membership has gone down in recent decades, there are still millions of people in the US who belong to unions. Here are some of the reasons you may have heard about them lately:

But you said union membership has gone down.

Yup. After declining for decades, union membership is at a historic low. In 2018, only 10.5% of American workers were part of a union, compared to more than 20% in the early 1980s.

A few things. We get into that, unions’ impact on the workplace, and the debate around them in theSkimm app. Every week, the app goes deep on a different news topic to give you the context you need to understand what's going on in the world. Download the app now and you get the first week free.