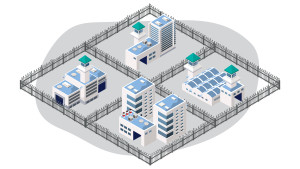 The US has the highest incarceration rate in the world. The system has disproportionately impacted minorities, and studies show that incarceration isn’t necessarily helping rehabilitate criminals. Here’s how we got here and the debate over what to do about it.

The US has the highest incarceration rate in the world.

At the end of 2016, more than 2 million people in America were behind bars. Most are in state prisons or local jails, with a smaller share in federal prisons. Quick note: a jail is typically used to house people for a shorter amount of time, such as those awaiting trial or sentencing, or those serving a term shorter than a year. Prisons are for convicted criminals serving long-term sentences.

Got it. So how’d we end up in this situation?

Many trace the rise in the US prison population to tough-on-crime policies that started to pick up in the late 20th century.

Drug-related and violent crimes in the US (which the government considers murder, sexual assault, assault, and robbery) started dramatically increasing in the late 1960s, and could be due in part to increased urbanization and rising homicide rates among African Americans. In response, both the feds and states started adopting stricter sentencing laws. In the 1970s, President Nixon declared a “war on drugs,” kicking off decades of federal policy aimed at decreasing drug use, including harsher sentencing. The crack-cocaine epidemic of the 1980s contributed to both the rise in crime and the number of people locked up. In 1994, then-President Bill Clinton signed the crime bill.

It adopted federal policies like mandatory minimum sentences for certain crimes and the three-strikes rule, which mandated life in prison if someone convicted of a “violent felony” has two prior convictions. It also expanded the death penalty to apply to dozens more crimes. And offered federal funding to states that ensured that prisoners served most of their sentences (vs being let out early).

Simply put: the effect of these state and federal policies was to lock more people up for a longer amount of time.

US prisons are overcrowded and expensive to maintain. They’re increasingly housing an aging population with costly medical needs. What’s more, studies show that incarceration isn’t necessarily helping rehabilitate criminals – in fact, people who spend time in prison are more likely to commit another crime. Meanwhile, even though crime rates in the US have been falling for decades, the incarceration rate has only dipped slightly. And minorities have been disproportionately affected. Black people are more than five times as likely to be imprisoned as white people in the US. All of these circumstances have led to louder calls among activists and politicians for criminal justice reform.

What kinds of calls?

There are a lot of thoughts about how to address the issue. In 2018, Congress passed and President Trump signed a bipartisan reform bill that did a few things: retroactively reduce sentences for people with crack cocaine convictions – a key example of racial injustice in the system since powder cocaine (used more often by white offenders) has lower penalties attached. The bill also reduces the three strikes penalty to 25 years instead of life and increases exemptions to mandatory minimum sentences. It was the largest criminal justice overhaul in a decade. But the reforms only apply to federal prisons, which make up 12% of the country’s prison population. Many say there’s much more to be done.

Here are some of the main issues up for debate:

Then there are the bigger picture issues aimed at addressing some of the root causes of high incarceration rates. Things like economic inequality, policing tactics in minority communities, and housing policies.

Nearly a third of American adults have a criminal record. This has both a literal and figurative cost to society. The US spends $80 billion a year on incarceration and in some states like California it can cost up to $81,000 a year to house a single prisoner. And there’s a ripple effect on those outside the system. Imprisonment breaks up families and communities with lifelong consequences. Studies show that children who grow up with a parent in prison are more likely to end up there themselves. And when prisoners re-enter society, they can encounter issues like lack of stable housing, difficulty getting a job, and being unable to vote. High recidivism aka the likelihood that an ex-con ends up back in prison means a less productive labor force and economy. And this cycle disproportionately impacts minorities, perpetuating racial and class division in the US.

Data shows that mass incarceration has persisted for decades with diminishing effectiveness. And while prison reform is the rare issue that has bipartisan support in the US, recent reforms have impacted a fraction of those behind bars. Activists say that more widespread change will require the country to adopt a new mindset that favors rehabilitation over punishment.