Net Neutrality: What you need to know 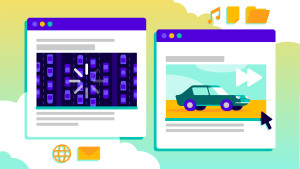 In 2015, the Federal Communications Commission (FCC) came out in full support of the concept that all websites on the Internet should be treated equally. But under President Trump, the FCC's saying 'nevermind.' Welcome to the net neutrality debate.

I just fell asleep. What?

Net neutrality means Internet providers can’t speed up access to some websites based on whether those sites can pay for a faster connection. And it can’t slow down or block others that can’t pay. Before 2015, content companies (like Netflix) could pay Internet providers (like Comcast) to get faster connections, while your favorite sports blog got stuck at the back of the line.

Back in 2015, the FCC voted to reclassify the Internet as a public utility (think: water and electricity) so that it has the power to stop Internet providers from slowing down or speeding up specific sites in exchange for payment.

WHAT DO INTERNET PROVIDERS SAY ABOUT THIS?

Objection. Companies like Verizon and Comcast say the cost of playing by those rules forces them to cut back on investments in new technologies. Read: bad for innovation. Several of these organizations got together and sued the FCC, but a federal appeals court dismissed their case in 2016.

High five. They'd pushed for this outcome for a while. Their argument? Letting Internet providers use pay-to-play would put startup sites and smaller companies at a disadvantage. Read: also bad for innovation. President Obama agreed.

President Trump sides with the network providers and thinks net neutrality is just another example of unnecessary gov restrictions. That's why he appointed Ajit Pai to head up the FCC and push for rolling back the Obama-era Internet regulations. The agency put it to a vote and agreed to start the process of what they call 'restoring Internet freedom.' Right now, lawmakers and the public get to weigh in on the decision, and it'll take a few more months for the new rules to go into effect.

Changing the rules in 2015 was the FCC’s third attempt to regulate the Internet. But the agency has now voted to roll back those rules. The fight lives on...