What is Obamacare: A quick history 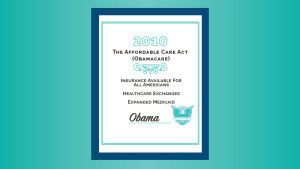 Obamacare, aka the Affordable Care Act — that’s its real name — is President Obama's big domestic achievement. It's also been Enemy No. 1 for the GOP.

Obamacare was signed into law in 2010. It was upheld by the Supreme Court in 2012. So yes, it's definitely a law. The goal was to make health insurance more affordable, and get insurance for millions of Americans without coverage. Plus, it aims to stop insurance companies from doing things like rejecting people with pre-existing conditions.

How is it supposed to work?

If you already have health insurance that fits the law’s standards, you’re good. If you don’t, you can hit up HealthCare.Gov, or your state’s website, to learn more about health care options and sign up for a plan. For those who are worried they can’t afford health care, they might qualify for help from the feds. Really, really don’t want health care? Too bad. There’s a penalty for not buying it. The whole point is that if everybody’s buying into the healthcare system, everybody will (theoretically) pay less.

First, a lot of people are going ‘hmm’ at the idea of the government forcing you to have health insurance, even if you don’t want it. Second, one of Obama’s key promises was that people who really loved their insurance could keep it. Turns out, that wasn’t totally true, and some people were booted off plans that didn’t meet the law’s new standards. Meanwhile, the Congressional Budget Office recently said that that Obamacare will hurt job growth in the next ten years because of factors like firms having to offer lower wages to pay for insurance for their employees.

What people who dislike Obamacare say...

We’ve been trying to repeal and replace this law ever since it was signed. It’s one big, expensive, government-run experiment that’s going to hike up health care costs, hurt economic growth and kill jobs.

What’s not to like? It's all about affordable health insurance and getting millions of uninsured people covered. Just don’t ask about those people whose plans got dropped and dear God nobody mention the HealthCare.gov launch.

Years after this law was signed, the number of uninsured people has gone down, and health insurance is more affordable for a lot of people. But some have been dropped from plans they liked, and others have seen their premiums go up. It’s been a rocky road.