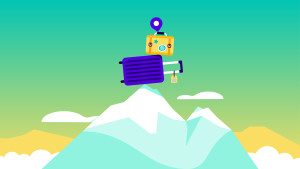 - Venice: The lagoon city is sinking, thanks to high tides and rising sea levels exacerbated by climate change. It doesn’t help that it’s inundated with tourists who want to soak up all the history and gondola rides they can. And many of them come by cruise ships, which cause big waves that can lead to flooding.

- Machu Picchu: The centuries-old cultural site has recently seen a spike in tourism. But the infrastructure there is old, and the risk of damage rises when you add too many tourists into the mix. To help prevent that, Machu Picchu only lets tourists visit during certain time frames during the day.

- Amsterdam: The city launched a tourism campaign in 2008 after the global financial crisis. Turns out, it was too successful: 19 million tourists now visit every year – about a 60% increase over the past 10-plus years – which congests narrow roads and has edged out local businesses for shops catering to tourists (think: food stores and coffee shops where you can smoke marijuana).

- Mount Everest: Last year, 11 people died while on the mountain, making it one of the deadliest hiking seasons there. Experts have attributed the death toll to overcrowding.

- US National Parks: In recent years, national parks have hit a record number of visitors. But many don’t always pay attention to their surroundings when they visit. Some throw trash and rocks at geysers, get dangerously close to wildlife, and have died while trying to take pictures.

It leaves local governments and travel companies trying to manage the chaos without taking a major monetary hit. They’ve done everything from implement tourist taxes (which are built into things like flight or hotel prices) to shut down sites where tourists have damaged the environment (think: coral reefs). Skimm Notes gets into more of that. You'll learn:

- Fly less. Airplanes are responsible for 2% of the world’s carbon emissions. So limiting how often you’re flying can help out the planet. Consider traveling to a closer destination to limit emissions, and check out some fuel-efficient airlines. But we can’t all be Greta Thunberg and sail across the ocean. So if you’re hopping on a plane to get to Europe, try to utilize the train system while you're there.

- Go local: Give your time and hard-earned cash to local restaurants, hotels, and tour operators so that your tourism dollars go back into the community.

- Change the season: Traveling to tourist hot spots during the off-season extends the tourist season for the locals who depend on that income. Booking activities in advance and showing up at off-peak times will help companies manage visitors and slim down the crowds.

- Do your research: Look for hotels and travel operators that have a good sustainability record and give back to the community. In some places, home-sharing can give locals an economic boost. In other places, a local hotel is your best bet because home-sharing is contributing to housing problems.