Trump's Transition: Who's new in the White House 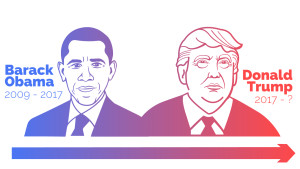 The US is going through the change. On January 20th, President Obama will pack his bags – and President-elect Trump will drop the ‘elect’ and step into the White House. Here’s your Skimm on the Trump transition, the new faces of Team Trump, the new prez’s plan for his first 100 days, and a look back at the key moments from the Obama years. Get ready for a red, white, and new era.

Surprise: There are a lot of people that help keep the US gov running. Here are some of the picks Trump’s made so far...

The job: Broad role that could give him a say on domestic and foreign policy

His resume: CEO of his family's real estate business. Also married to Trump’s daughter Ivanka – which has many wondering whether his appointment breaks anti-nepotism laws.

The job: Top adviser to the president

The job: Top adviser to the president; works on the White House’s priorities with lawmakers

Her resume: Longtime Republican pollster who served as Trump’s campaign manager, and the first woman in that job to win a presidential campaign

The job: CJ Cregg. Manages the White House’s relationship with the press

The job: President's top adviser on foreign policy; manages international relations on behalf of the US

His resume: Former CEO of ExxonMobil; has relationships with lots of foreign governments, including close ties to Russia and President Vladimir Putin

The job: The top defense adviser to the president; in charge of the military

His resume: Served in the Marines for more than 40 years, leading forces in Afghanistan and Iraq

The job: Official US rep to the United Nations; keeps the sec. of state and president in the know about what’s going on there, advises them on foreign policy

Her resume: Two-term South Carolina gov known for taking the Confederate Flag down from the state capitol after the Charleston church shooting in 2015

The job: Carrie Mathison’s boss. In charge of all the CIA’s operations. Sets priorities for the agency. Advises the president on intel related to keeping the homeland safe

His resume: Congressman elected during the Tea Party wave; on the special committee that investigated the Benghazi attacks

The job: The top law enforcement officer in the US, in charge of the Justice Department

His resume: Former US attorney and longtime senator from Alabama; many are pointing to his spotty record on civil rights as a big concern

The job: Oversees the US debt; advises the president on economics and financials

Trade...as in Trump wants to renegotiate NAFTA (cough, '90s trade deal between the US, Canada, and Mexico, cough). And then he wants to pull out of the TPP. That’s the trade deal between the US and 11 other Pacific Rim countries (hint: countries that border the Pacific Ocean like Canada, Japan, Mexico) that President Obama put together. The aim was to open up trade between countries that produce almost half of the world's goods and services. Critics on both sides of the aisle point out that this could hurt US workers by sending jobs overseas. One of those very loud critics is Trump.

Energy...as in Trump plans to exnay a bunch of federal rules on US energy production including oil, gas, and coal put in place to fight climate change. He’s said he’ll also make it easier for oil pipelines (hi, Keystone XL) to move forward. Trump says this would boost job creation.

Lobbying ban...as in Trump wants the ‘revolving door’ between K Street and the US gov to swing a little slower. He’s calling for a five year-ban on White House and Congressional staffers taking lobbying jobs after they leave. He also wants a lifetime ban on White House officials lobbying for foreign governments.

Supreme Court...as in there’s been a job opening on the bench for almost a year, and Trump’s ready to fill it. He’s said he’s considering a list of right-leaning names.

Immigration...as in Trump will move to “cancel all federal funding to Sanctuary Cities” – aka cities that allow undocumented immigrants to stay without fear of being prosecuted or deported. He’s also said he’ll start deporting about two million undocumented immigrants with criminal records. And that he’ll hit ‘pause’ on immigration from regions with a history of terrorism that do not vet people coming into the US. He’ll also practice “extreme vetting” for all immigrants.

Obamacare...as in repeal and replace. Still working on the replace part.

In ‘09, the economy was looking like you after your 21st birthday. This $787 billion stimulus is supposed to turn it around. Depending on which side of the aisle you’re asking, it’s either the best or the most terrible policy ever.

SOTOMAYOR NOMINATED TO THE SUPREMES

Obama taps Sonia Sotomayor to be the first Hispanic and the third lady Justice to serve on the Supreme Court. Later, Elena Kagan joins the fam.

GM goes over the rails, despite billions in bailout dollars that Pres. George W. Bush gave the company in ‘08. The US gov. eventually loans around $80 billion to the auto industry in total, which is paid back in full overtime.

Harvard Prof. Henry Louis Gates Jr. was arrested at his home after a neighbor mistook him for a burglar. Obama called the arrest ‘stupid.’ Cue a heated national debate over racial profiling. And the world’s most awkward round of beers between Obama, VP Joe Biden, Gates, and the arresting officer.

END OF THE IRAQ WAR

Obama says the Iraq War is officially over, checking off a key campaign promise. Meanwhile, there will be thousands of non-combat US troops in Afghanistan

A gunman kills 20 students and six adults at an elementary school in Newtown, CT. It’s one of the worst school shootings in US history. Obama taps VP Joe Biden to lead a push for gun control. The Senate eventually says ‘nope’

“TRAYVON MARTIN COULD HAVE BEEN ME”

The US gov. shuts down for the first time in 17 years thanks to Congress being unable to agree on a budget. “Nonessential” workers are forced to stay home, national parks are shut down, and worst of all the panda cam is turned off. Many Republicans want to defund all or parts of Obamacare before they’ll sign off on the budget.

The shutdown ends over two weeks later. This is one of many budget fights

MERRICK GARLAND NOMINATED TO THE SUPREMES