Stacey Abrams Celebrated for Her Role in Georgia Runoff Elections 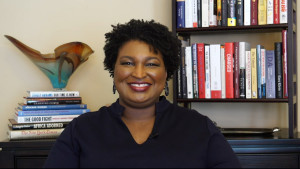 On Tuesday, Democrats in Georgia pulled off a feat unseen in the last two decades, when they flipped two Senate seats. Rev. Raphael Warnock (D) beat Sen. Kelly Loeffler (R) and challenger Jon Ossoff (D) bested incumbent Sen. David Perdue (R). The stakes for this runoff election couldn’t have been any higher. And the wins helped Dems secure control of the Senate for the first time in six years.

What made the difference?

It’s more like who made the difference. Her name is Stacey Abrams. The former minority leader of GA’s state House came into the national spotlight back in 2018, when she ran for governor against Brian Kemp (R). And although she didn’t win, her run made history. She received more votes than any other Democratic candidate in the state’s history. Her resume also includes: New York Times bestselling author, serial entrepreneur, and nonprofit CEO.

Indeed. For the last decade, Abrams has been working to flip GA blue. Back when she was running for governor her opponent (the governor) purged 1.4 million voters from the rolls. And then reportedly reduced the number of polling places and voting machines available to Black and poorer communities. Voters dealt with long lines and malfunctioning voting machines. Kemp won that election. But Abrams didn’t give up. She doubled down on her efforts to battle voter suppression and put her energy into her organizations New Georgia Project (which aims to register and engage Georgians to vote) and Fair Fight (a voting rights org, which she started after losing her campaign for governor).

She registered more than 800,000 Georgian voters in the last two years. Repeat: 800,000. And focused on getting underrepresented voters (think: Black and minority voters) registered and to the polls. And they showed up. Abrams was given credit by celebrities, politicians, and journalists for her work in organizing and rebuilding the Democratic Party in GA. And for helping flip the state blue. First, with Biden's win. Now, with Warnock's and Ossof's win.

What’s next for her?

Rumor has it she's going to take her shot (once again) and run for GA's governor in 2022. But government title or not, she has cemented herself as one of the most influential figures in American politics today.

For decades voter suppression in GA has been used as a tool to keep Black and minority voters from fairly casting their ballots. But after Abrams’s historic run in 2018 for governor, an idea was born: The Peach State might actually be purple after all. Abrams, alongside Black grassroots organizations and numerous Black women, worked hard to make this idea a reality. They successfully built on the histories of their Georgian predecessors, like the late Civil Rights icon Rep. John Lewis (D), and innovated new ways to engage communities that are typically left out of the conversation. Now, 56 years after the passage of the Voting Rights Act, we may be seeing for the first time what representation for GA’s Black voters actually looks like.