The History of the GOP: How the Party Changed 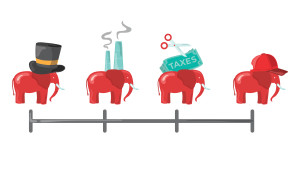 That he’s followed through on his campaign promises on everything from the economy to foreign policy. Trump can rally his base by being direct and blunt, especially on topics like immigration. He knows Republican allies won’t push back against his divisive language. And when they do, he attacks them publicly – those who have tried have lost reelection campaigns, retired from politics, or left the party. His support may become especially visible at this week’s Conservative Political Action Conference (CPAC). Skimm Notes explains the history and significance of the conference.

It’s one of the largest events for conservatives every year (think: speeches, networking). President Trump is expected to take the stage for the fourth year in a row. Some of this year's other speakers include British politician Nigel Farage, President Trump's economic adviser Larry Kudlow and New England Patriots tight end Benjamin Watson. Bet you didn't see that last one coming. Expect a lot of talk around Trump's 2020 re-election campaign.