Tokyo Olympics: Everything You Need to Know, Skimm’d 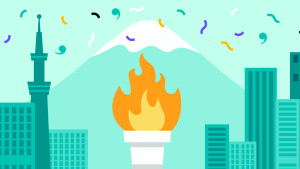 The 2020 Tokyo Olympics are finally here. After being pushed back a year because of the COVID-19 pandemic, the games officially kick off on July 23. More than 11,000 athletes and 79,000 journalists, officials, and staff will be there. And the local organizing committee has poured $15.4 billion into the event – making it the most expensive Summer Olympics on record. In part because of the pandemic. Japan has over 800,000 confirmed cases as of early July, with the delta variant at play. So it’s safe to say these Olympics will be one of a kind.

How is Japan doing with COVID-19?

Foreign nationals (from specific countries) aren’t allowed to enter Japan. But Olympians are an exception. Anybody participating in the games isn’t required to be fully vaccinated. But athletes will quarantine for three days with some leeway. The International Olympic Committee (IOC) says about 80% of qualified athletes and the press have been vaccinated. Japan has urged athletes to land in Tokyo no more than five days before their competitions. And they’ll likely be asked to leave days after finishing. Everyone is required to record two COVID-19 tests within 96 hours of departing to Japan. And one must be taken within 72 hours.

Things may get tricky when everyone arrives. Especially as the delta variant continues to spread. So some things will definitely look different than previous years. But officials have put together a playbook with rules addressing just about everything. One major change is no fans IRL. Here’s what else athletes have to look forward to….

Protocols: Athletes from every nation will have a COVID-19 liaison officer. And masks are required everywhere...unless sleeping, eating, or competing. There will be daily testing and temperature checks for everyone, as well as GPS monitoring for media and athletes. And while that may seem like Big Brother is watching its purpose is for contact tracing if an issue arises. They also can’t use public transportation unless it’s the only option. And can only eat in specific locations with special hygiene measures i.e. the Olympic Village.

Accommodations: Most athletes will still be staying at the famous Olympic Village. But this time, they’ll get condoms on their way out.

A positive test: If an individual athlete tests positive, they have to isolate immediately. And won’t be allowed to compete. Meaning: They’ll lose a shot at competing and potentially winning a medal. Those who come in contact with a COVID-19 positive person will need a negative test result. And might have to follow more enhanced measures if they continue competing. The Japanese gov could also send anyone with a positive test to a gov-run isolation facility.

Are any countries not participating?

Yup: Russia and North Korea. But for different reasons. Here’s why you won’t see their flags at the games:

Russia: In 2019, the World Anti-Doping Agency banned the country from international games for four years over a doping scandal – which was later reduced to two years. But there won’t be an official Russia team. Instead, 335 Russian athletes can still compete as “ROC” athletes – aka the Russian Olympic Committee – and sport Russia’s colors.

North Korea: It’s the first country to pull out because of the pandemic. We don’t have much info on how the coronavirus has impacted the country, but some reports suggest it’s been devastating.

Meanwhile, other teams have grown in numbers. The IOC Refugee Olympic Team (which represents millions of people who fled their home countries) has selected 29 athletes to compete in the games. This is nearly three times the number of refugee players who competed in Rio.

What else do I need to know about this year’s games?

A lot. Here are some of the news that have made headlines ahead of the kickoff...

Sha’Carri Richardson: In June, the 21-year-old sprinter became the fastest woman in America at the Olympic trials, running the 100 meters in 10.86 seconds. But she later tested positive for marijuana, and was suspended by the US Anti-Doping Agency for one month...and the Olympics. She says she used marijuana to cope after learning her biological mother had passed. And her suspension has caused outcry among athletes and fans. WNBA star Sue Bird called the THC ban “outdated.”

Babies: The IOC said athletes couldn’t have their family members travel with them because of the pandemic. That upset a lot of breastfeeding mothers who said they shouldn’t have to pick between their sport and kids. But in June, the IOC reversed the decision, and allowed mothers to bring their breastfeeding babies to the games.

Testosterone: Namibian track stars Christine Mboma and Beatrice Masilingi were banned from competing in the women’s 400-meter race. The reason? Because their natural testosterone levels were considered too high. The finding violates a World Athletics’ rule that says women with naturally high-levels of testosterone need to take medication to bring it down. Masilingi reportedly said taking the meds would “ruin” the way her body develops.

Soul Cap: The International Swimming Federation barred the use of the Soul Cap – which was specifically designed for swimmers with natural Black hair – in the Olympics. They said it doesn’t fit “the natural form of the head.” Now, after receiving backlash, the org says it's reviewing its initial decision.

Where can I watch the events?

NBC and its affiliates (think: NBC Sports, CNBC, etc) will be streaming the Olympics. For those of us who haven’t had cable since 2018, it can also be streamed on NBC’s Olympics site. Telemundo will also air the events in Spanish.

Reminder: There’s a 13-hour time difference between Tokyo and the US Eastern time zone. So some of the events will be live and others will likely be played on a tape delay. Meaning: If you don’t want any spoilers, stay off social media until you can watch.

Some events will actually be held before the official start date. Like softball and soccer. Events last through the closing ceremony, which will be at 7 a.m. ET on Aug 8. (Make sure you don’t miss out on the new events this year too.) The Paralympics – also going down in Tokyo – will start on Aug 24.

No matter what sport you’re most excited to watch, we've got you covered so you don't miss a beat. theSkimm App lets you sync our calendar with yours so you'll know when major events are going down. Bonus: First-time users get the first week free. You can download the app here.

The 2020 Tokyo Olympics will be one of the largest global events since the COVID-19 pandemic started last March. And the surge in cases in Japan could throw a wrench into the years of planning for the games. But people around the world are hoping that the event will be smooth and restore some of the normalcy that everyone’s been waiting for.